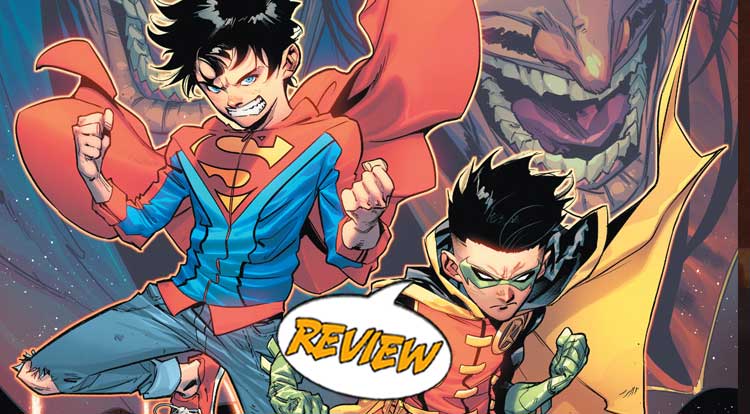 Challenge of the Super Sons #1 Review

Jon Kent.  Damian Wayne.  They are the understudies for the most powerful and resourceful heroes of their world, but they’re still just kids.  Your Major Spoilers review of Challenge of the Super Sons #1 from DC Comics awaits!

CHALLENGE OF THE SUPER SONS #1

Previously in Challenge of the Super Sons:  The boys are back!  The sons of Batman and Superman are back in the spotlight and ready to give evil a good spanking. But are Robin and Superboy in over their heads this time?  A mysterious woman from beyond time has appeared to the DCU’s favorite sons, and her arrival heralds certain doom (that’s a hint, everyone) of things to come!  In fact…it seems she’s sent the boys on a bogus journey that they’ve already… returned from?  Huh?  What did the boys learn when they were whisked away? Why on earth do they have to save the Flash from instant death?

IN THE FAR FUTURE

Once again, we open in the future as an elderly Damian and Jon argue (this time, it’s over a video game that gets their voices entirely wrong and who is or isn’t cheating at it), while their grand-kids once again sneak in to read a volume of their adventures as teens.  Back in the past of the future, young Damian and Jon are doing some research in the West-Reeve school library, trying to figure out a cheating scandal.  Jon wants to use it as a stepping stone to the school paper, but Damian reminds him that print is dead…  and also, he solved the mystery and emailed the teachers to make sure the guilty parties got busted.  Jon is unhappy, but agrees to go on patrol in Metropolis, where they encounter a woman who looks a lot like the Time Trapper, who sends them to find The Doom Scroll.  Amusingly, their adventure takes place off-screen, and the duo returns, knowing that they must save the life of a member of the Justice League!  Next stop: Central City!

I have to admit, the Tomasi Super-Sons tales are a lot of fun, and this one immediately picks up where things left off pre-Bendis age-up.  The humor of having these two characters together is charming, and even if you hate Damian Wayne as much as EIC Stephen does, their interactions are gold.  Add in the use of the Super-Mobile (necessary to get Damian to Central City in time to save the Flash’s life) and you’ve got a comic book that entertains on all cylinders.  Max Raynor’s art is likewise very charismatic, as well as cinematic, and it’s paired with an excellent coloring job by Guerrero.  The issue ends with the promise of a trip to save Wonder Woman, having already fixed The Flash’s fate making me think that we’re getting a tour of Justice League home towns as part of the Super-Sons as-yet-not-fully-revealed mission.

BOTTOM LINE: WORTH IT FOR THE SUPER-MOBILE

All in all, Challenge of the Super Sons #1 is a remarkable comic book achievement, a mini-series that successfully picks up where a cancelled book left off, even after the characters have moved on, with fine art and truly impressive coloring making for an entertaining read and 4.5 out of 5 stars overall.  I may not know what’s going to happen with the Legion, but at least we have these untold stories of Superboy’s even more youthful youth.

Even if you hate Damian and Jon as they are now appearing, you can enjoy this fun teen superhero adventure.