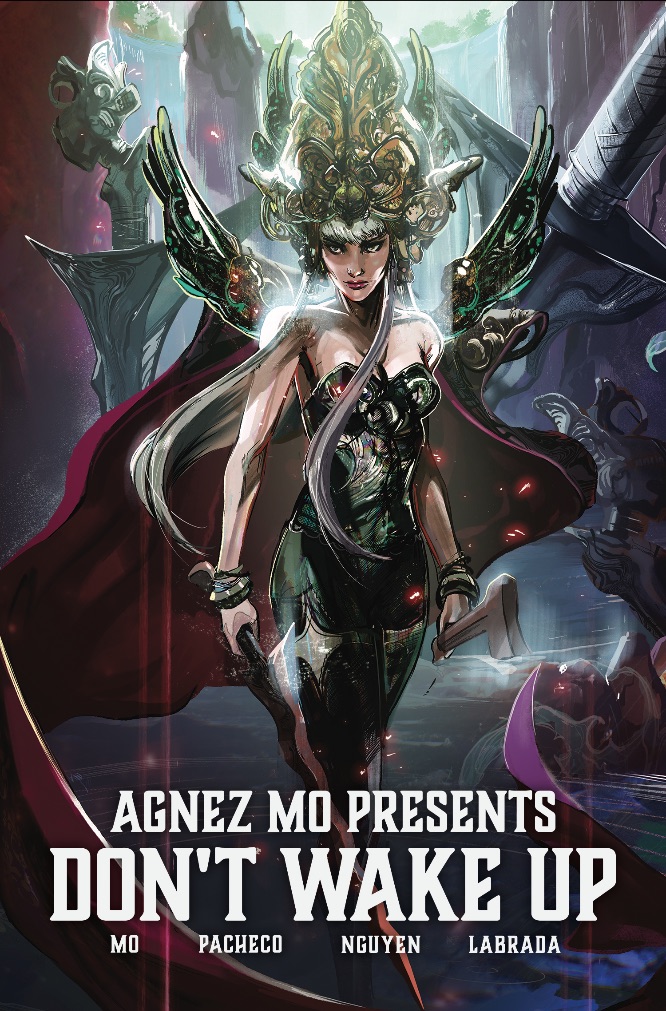 Z2 Comics and Agnez Mo team for Don’t Wake Up

Z2 Comics continues to bring musicians from every genre to the sequential arts, pairing these performers with top artists and writers for an authentic experience for music fans and comics lovers alike. Next up, the publisher teams with Indonesian singer and actress Agnez Mo for Don’t Wake Up, an all-new original graphic novel, written by Karla Pacheco, and featuring art by Peter V. Nguyen and Andres Labrada. Agnez Mo says “I’ve always enjoyed storytelling, whether through my songs when I write them or through my music videos when I direct. But now, I’m extremely excited to jump into this new realm of graphic novels. It’s been incredibly fun to formulate this fantasy tale that I initially created for my song ‘Long As I Get Paid,’ which has since come to life as a real comic character. I’m really looking forward to sharing this with my fans as I’m super proud of this first issue and have loved working with this team to help me carry out my vision.”

Inspired by singer Agnez Mo’s hit music video “Long As I Get Paid,” comes an atypical avenging angel. Walking between the dreamscape and reality, existing outside the forces of good and evil, she follows her own moral code. And her methods of delivering justice aren’t swift, which is not good news for John, an unsuspecting artifacts dealer with a nasty pastime and a willful insistence on his own virtue. Don’t Wake Up is Catwoman meets The Sandman, where creator Agnez Mo and writer Karla Pacheco (Spider-Woman) will transport you into the dreamscape, seduce you into the heist of a lifetime, and pull you into a battle of gods for the ages.

Agnez Mo is the most awarded artist in Indonesia, who has amassed an incredibly loyal and dedicated following that includes 24 million on Instagram and 18 million on Twitter. She is nominated again for “Fan Army” at this year’s iHeartRadio Music Awards and won the year prior for “Social Star” – another win to add to her unbelievable collection of awards she has amassed over the years, a staggering 194. She has collaborated with Timbaland, French Montana, T.I. and recently released her new sassy single, “F Yo Love Song,” in advance of a full project coming later this year.

Don’t Wake Up has been translated from the young artist’s vision to print by writer Karla Pacheco along with artistsPeter K. Nguyen and Andres Labrada, with an exclusive limited deluxe version to include prints by artists N. Steven Harris, John McGuinness, Gabe Sapienza, and interior artist Peter V. Nguyen. This immersive new story arrives in finer comic shops and bookstores everywhere this fall, with all editions, including the exclusive deluxe hardcover available to preorder directly from Z2 now!

About Z2 Comics:
Z2 Comics is the premier destination for official music-related graphic novels, created in partnership with top-tier artists, musicians, directors and pop-culture icons. Distributed globally via Simon & Schuster, Z2 has collaborated with such diverse artists as Blondie, Elvis Presley, Gorillaz, Machine Gun Kelly, Sublime, Yungblud, Cypress Hill, Babymetal, Major Lazer, Rico Nasty and Paul Oakenfold as well as debut comic works by Grammy-nominated artists Sturgill Simpson, Poppy and Anthrax. Additionally, the company has tapped top talent for the official graphic biographies of such pop-culture legends as The Grateful Dead, Beethoven and Charlie “Bird” Parker. In 2021, Z2 will publish graphic novel tie-ins to essential albums by The Doors, Ronnie James Dio, All Time Low with many more to be announced in the coming months.