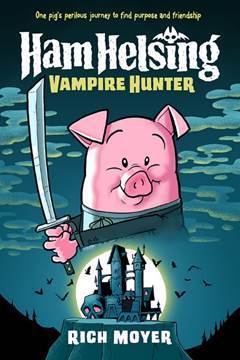 Perfect for fans of Raina Telgemeier and All’s Faire in Middle School, this sequel to the Eisner Award-nominated The Cardboard Kingdom follows the kids as they solve the mystery of a new neighborhood monster.

Vijay, the Beast, renounces his title after being bullied by neighborhood teenagers. No one–not his big sister Shikha or his friends–can seem to draw him back out of his shell.

That very night, an unknown monster is spotted roaming the Kingdom after dark. It’s ghastly, it’s quick, and it might even have giant tentacles. Or claws. Or wings. Okay, there might be some varied testimonies on what exactly this monster looks like.

Forget Halloween–the newly minted Monster Mashers will go to any lengths to protect the Kingdom and uncover this mystery. But how did the monster get here? What does it want? And mostly importantly, who is behind its creation? Two friends: one big, one little. One old, one young. One grumpy, one cheerful. Both: MONSTERS! From the author of Crabapple Trouble comes a sweet and fun-filled chapter-book graphic novel, with a charming cast of adorable monsters.

Reggie’s plan is to spend the whole summer brooding over his latest adventure gone wrong. But his friendly and curious neighbor, Emily, won’t let him sit alone and unhappy in his house forever! Despite their differences, these two monsters make the perfect pair of explorers. And with a map to make, a beach party to plan, and a sea monster to find, Reggie will have to learn to talk about his feelings and let new friends in! The monster hunt is on! A rip-roaring graphic novel adventure about the latest in a famous family of vampire-hunting pigs, inspired by legendary monster slayer Van Helsing!

Ham Helsing is the descendant of a long line of adventurers and monster hunters–who don’t often live to rest on their laurels. Ham has always been the odd pig out, preferring to paint or write poetry instead of inventing dangerous (dumb) new ways to catch dangerous creatures.

After his brother Chad’s death, it’s down to Ham to carry on the family legacy of leaping before looking. Reluctantly, he sets out on his first assignment, to hunt a vampire. But Ham soon learns that people aren’t always what they seem and that you need a good team around you to help save your bacon! Pacey and Slasher the Unicorn are back and THIS time it’s personal in this laugh-out-loud graphic novel series with ATTITUDE that’s just right for fans of Phoebe and Her Unicorn, Bad Guys, and anyone who loves (or hates!) unicorns!

The last time Pacey Packer was in Rundalyn, the world of unicorns, she sliced the horn off of Arkane, the Evil Apha Unicorn, and took away his power. KI-AHHHH! TAKE THAT BAD GUYS! Now the unicorns and other creatures under Arkane’s rule call her . . . THE HORN SLAYER!

Pacey may be a LEGEND in the world of unicorns, but she didn’t finish the job. With Slasher’s help, can she use the power of the unicorn horn to rescue the statue kids and escape the fury of the Great (but seriously horn-less and now SERIOUSLY mad at her) Arkane?! Join troublemaking squirrels Norma and Belly on more delicious adventures in the sequel to the graphic novel Donut Feed the Squirrels, the perfect next-read for fans of Narwhal & Jelly!

When local park fixture (and spy-master) Pops gets squirrel-napped, it’s up to Norma, Belly, and their friend little B to save him! This time, their adventure takes them out of the park–and into the uncharted territory of . . . the local apple orchard.

Where can Pops be? Will this adventure end in tragedy . . . or in apple pie? Or both? With these best friends on the case, you never know what’s coming next–but you can be sure there will be friends and delicious foods along the way. Shark and Bot, the two most unlikely friends, are back for more hilarious and epic adventures!

It’s Summer vacation and Shark and Bot have a new adventure– at sleepaway camp! Shark (always a nervous nelly!) quickly starts feeling homesick. Can he make it through the week? Will Bot short circuit at the lake? Find out in this hilarious new installment. Travel to planets unknown in book two of the Space-Time graphic novel series from the author of the New York Times bestselling Jedi Academy books!

Jide, Petra, and their intergalactic friends are back on the Potato (their orbiting classroom) for another out-of-this-world adventure. Their latest space mission brings them to the home planets of their schoolmates, where pranks must be avenged, new terrains must be explored, and the patience of Commander G must be tested!
Buckle up! The next Space-Time series mission from New York Times bestselling author Jeffrey Brown is ready for blast off! It’s Wednesday! Which means it’s time for Jim Panzee’s weekly Wednesday walk. Jim’s favorite part: the blissful silence, when he can hear all the jungle sounds. Until . . . his best buddy, Norman—and every other animal in the jungle—decides to join him.

Jim grabs his stress orange to calm his nerves . . . but when he squeezes a bit too hard, the stress orange goes squish. So Jim and his not-so-helpful friends must cross the jungle to get another stress orange before it is too late!