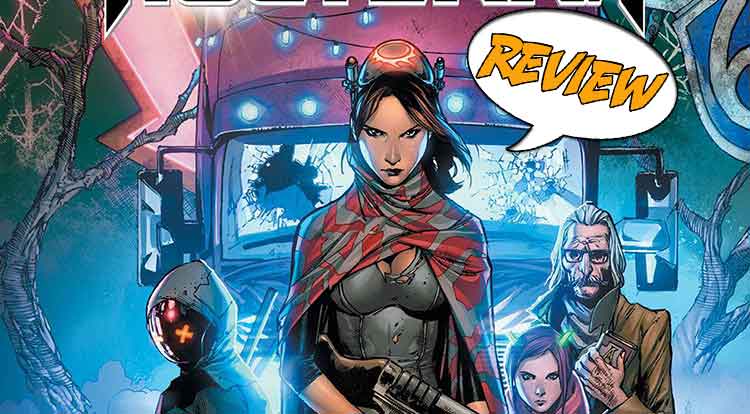 Val Riggs agrees to take two passengers through the Dark. Little does she know she will have a run in with the fearsome Blacktop Bill! What or who is he after? Find out in Nocterra #2 from Image Comics!

Previously in Nocterra: Earth has been plunged into darkness. And in that permanent night, any living being caught out in it turns into a monstrous Shade. The human survivors have gathered into villages where they can create enough artificial light to keep the creatures at bay. In this world, Val Riggs is a Ferryman, one of the people who braves the darkness to drive a truck between outposts, transporting people and goods. Her support is her brother Emory, who has become infected with the darkness. She is trying to treat him but is running out of money and time. And then she meets and old man and his granddaughter. They want safe transport, and only Val can provide. Little does she know, but someone else may be after them.

Nocterra #2 opens with Val remembering the start of the Big PM again. Her and Emory’s parents were scientists, telling the kids not to worry because the dark is where all the great mysteries lie. But before long, they joined a prayer group that had formed, going outside and braving/challenging the darkness. In the end, the darkness won and took them over. But even at that age, Val was sensible. While Emory wondered if this was somehow heaven, she was more skeptical. Even if it were heaven, she was going to take all the batteries to wherever she was going.

Back in the present, she is driving the truck with the man and his granddaughter, with Emory as her copilot. They must to stop to recharge and do so at a place called the Neon Grove. As narrator, Val explains that these places are called ports. The Ferrymen make them for each other. She compares their work to sailing ships over the vast, open seas where, with one mistake or disaster, you could simply vanish in the deep. She also likens herself to the Ferryman who transports souls through the land of the dead. She may be tough and all business, but this is pure poetry in this world of darkness.

As she goes about her work, the man comes to talk to her. He claims to be on a mission to bright back the light. More than that, he and his brother invented a machine to see and capture cosmic particles (also connected to a theory about there being multiple planes – basically, filling in the sci-fi background here). Then he mentions that in passing that his machine apparently found the wrong particle.

How much is Val listening to him? Unclear, as she is emptying a trap and using him as bait. The Shade rushes toward him, and she kills it. And it turns out she has been paying attention. He casually picked up a plant but knew enough to hold it by only the stem. She makes it clear she knows he has been out in the darkness. She doesn’t care what he is up to. She cares only that he has money for her.

Val gets a call from Bellwether, her dispatcher, who tells her she needs to get off the road. Someone by the name of Blacktop Bill is chasing her. That may be the name of a ghost in stories of the road, but Bellwether insists he is real, and he destroyed several rigs in town. He is not so much after her as he is after her fares.

Val draws a gun on the old man and demands that he tell her who is after them. Bailey, the girl, claims they lost him. Then the alarms in the Neon Grove go off. Blacktop Bill and his convoy have arrived. Val gets everyone into the rig as Bill speaks to her through her helmet. He claims he has been hired to kill her two fares, and that his employers have a solar lamp. He also knows about Emory’s condition. Val was driving out, but she starts backing up. She talks again to the old man, whose name is Dr. Augustus McCray. She is trying to figure out who is telling her the truth. As a child, she was blind, and she learned the hard way about people lying, like when other kids thought it was funny. She has learned to be tough and skeptical.

But she has a serious choice to make…

A BEAUTIFUL ENVISIONING OF A DARK WORLD

The art of Nocterra #2 is incredible. Val and Emory as kids look like they could grow up to be the adult Val and Emory. The emotions they’re going through at the start of the Big PM are almost tangible. And from those early days, we can see that Val is tough. Whatever she has experienced in her life hasn’t rendered her incapable of love, as she plainly cares deeply for her brother. But we have learned that it has taught her to be skeptical and not to trust too easily. It is interesting to tackle the big drama in this book with someone who is not at all positive but holds herself to the here and now.

This world is so creatively portrayed. We see more of the Shades, which are terrifying. The port, Neon Grove, is a treat for the eyes. Safe places are all about the lights they have, and when Val gets out of the truck and turns them on, we find ourselves in a place in the woods decked out with strings of lights and random old neon signs. Their cheerfulness contrasts starkly with the rest of the long night. Blacktop Bill and his gang are sinister and stylish. Bill appears all black, as in flat black with no form or highlight. The only feature we ever see on him are his grinning white teeth. His gang use the theme of teeth as their symbol, which is fitting if also creepy. But Bill looks downright otherworldly.

BOTTOM LINE:  A SCI-FI THRILLER TO THE CORE

Nocterra #2 takes the story’s set-up and runs with it full speed. The action comes hard and fast, and Val is beset with difficult choices that she makes without dithering. Her foe appears formidable, and the outcome of this mission is far from clear. It is a great read if you love suspense. The musings of the past feel a little long, but so far, they all come back to be pertinent.

Ferryman Val Riggs takes on the most dangerous cargo of her life.