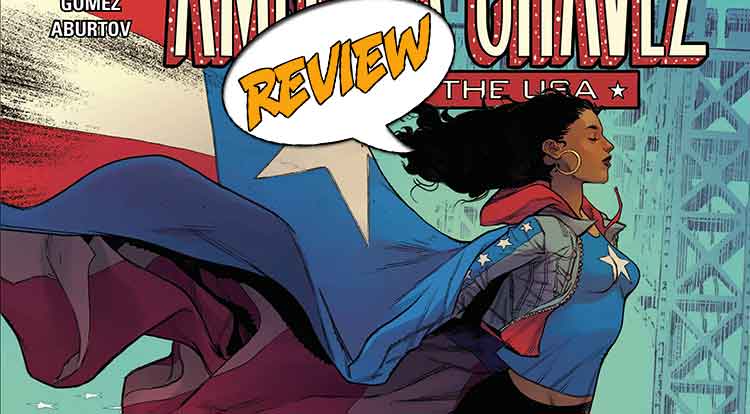 America Chavez: Made in America #2 Review

America’s back home, but the family reunion isn’t as happy as it could be.  Your Major Spoilers review of America Chavez: Made In America #2 from Marvel Comics, awaits!

Previously in America Chavez: Made In America: A forcefield has enveloped a portion of New York City, the portion that just so happens to house the adoptive family of America Chavez, forcing her to come back out east, but someone who apparently knows her well has left her a threatening message.

America Chavez: Made In America #2 opens up with America and Spider-Man wrapping up the situation with the force field and the people inside.  The two have a brief conversation before America heads to check up on her family.  Almost everyone is happy to see America. There are a few exceptions to this and this leads America to take a walk with her adoptive father to the family bodega. There she checks the footage from the store’s cameras and discovers that someone has left her a clue. She tracks down the clues which leads to an unexpected end.  Interspersed with these events are scenes from America’s youth and how her choice to be a hero and do what she believes her mothers would want leads to friction with her adoptive family.

One of the first things that stood out about America Chavez: Made In America #2 was how they depicted the family dynamics with America and her adoptive family.  It’s not uncommon to see heroes hiding their vigilantism from their family like with Spider-Man, or families who do know but are supportive, like Spider-Man (Miles). Here though we get a unique setup.  Here we have a hero who lets her family know about her intentions of being a hero and parts of that family not being happy about this.  Furthermore they even use the same excuse a lot of heroes use for having a secret identity against her.  They say that her being a hero will put them in danger.  It’s a good twist on a pretty old trope in the comic book industry.  As for the rest of the comic, a lot of it seems designed as a bit of a further introduction to the character and it’s not uncommon for this to be awkward or clearly forced in.  Kalinda Vasquez manages to avoid those pitfalls though and accomplishes the task in interesting ways.  For example, America’s conversation with Spider-Man explains that America originally came from a different dimension and one of the flashbacks shows what America’s family from that dimension looks like.

THE BOTTOM LINE: A GOOD JUMPING ON POINT

While it may seem strange to say that the second issue of a series is a better introduction than the first.  But, America Chavez: Made In America #2 manages to flesh out America’s origin and family dynamic more than the first issue which was more concerned with putting her into the action and plot. This issue takes old and well-worn tropes and twists them just enough to be unique but not entirely out of left field.  The amount of time spent on America’s past and her family means that the actual plot isn’t pushed forward that much but the issue doesn’t suffer for that.  This issue earns 4 out of 5 stars.

America Chavez: Made in America #2

America Chavez #2 slows things down a bit from the first issue, but that doesn’t diminish its effectiveness as a good place to hop on if you’re unfamiliar with the character.