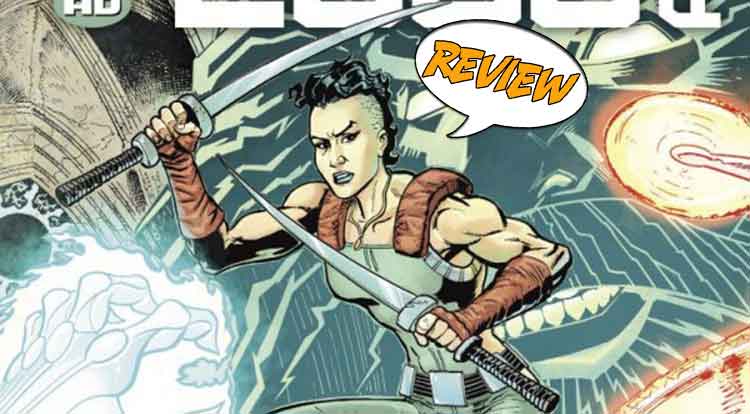 In 2000AD #2226, it’s more mayhem, from the crowded nightmare of Mega-City One, to the corruption and filth of Harrowvale and Deadworld. A Nunja springs into action and the woods of Feral and Foe are darkly dangerous. So dangerous, will your reviewer survive? Find out in your next mighty Major Spoilers review! Previously in 2000AD: A mighty UK anthology, for forty years and more 2000AD has been THE UK comic for a generation and more of readers. Where else can you visit the nightmarish dystopia of Mega-City One, patrolled by none other than Judge Dredd? Or witness new talent emerge in self contained stories to blast your mind? Or meet characters such as the doomed Johnny Alpha, the devilish Devlin Waugh and the nightmare of the Dark Judges? 2000AD, that’s where…

Corrupt Judges end up doing a twenty year stretch on Titan, mining the moon for its resources as punishment for their crimes. Those who survive are resettled back on Earth, but what sort of life is there for a bent Judge? Not much, as Dredd finds out in the second part of this new series.

The storytelling on offer here by writer Ken Niemand is remarkable for its compression and yet its sense of scale. In a few short panels, you get a sense of the blighted life ex-Judge Kyle Asher leads as the lowest of the low in Mega-City One. His highlighting of the rampant corruption in the city is one of the main threads running through the series – that for all the Judge’s efforts to uphold the Law, they are a thin black line holding back a relentless tide of crazy people intent on breaking every law in the statute books. The sense of oppression and hopelessness that Asher faces is well rendered in the short number of pages on offer, and Tom Foster’s art comes to the party, depicting the rank squalor and claustrophobia of the cubes. This story line will be one to watch, and mark my words, it’s a tragedy in the making.

Folk horror is some of the best horror. Where else can you get a sense of the grimly ancient British forests, with millennia of blood sacrifice to pagan gods, while the people cowered in the night, praying for the return of the light in the morning? In the modern day, where the cities predominate, the idea that something bad lurks in the shadows of the countryside, sounds faintly preposterous. But when city folk venture out of the safety of their concrete and steel homes, and into the rot and foetid atmosphere of the depths of the forest, who will return unscathed?

This latest part of Thistlebone is very much a placeholder, as journalist Seeman Chaudry and Avril Easton venture to the village of Harrowvale, hoping to expose a cult of people who worship and forest deity. There’s a lovely vignette of Scouts in the forest telling each other spooky stories before light’s out, but otherwise, not much happens. Simon Davis’s art is the winner in this episode.

The Dark Judges exist in a parallel dimension of horror and depravity. Visions of Deadworld examines Judge Mortis’s reign of terror, as he snuffs the life out of 18 million inhabitants. In a corrupted world, realised in exquisite detail by artist Dave Kendall, humanity is losing the struggle. Sun Yi thinks he can stop this monsters monstrous spree, and the use of a golden bullet fired into Mortis’s head seems to work. But you can’t keep a good Dark Judge down, and Sun Yi’s fate is horrific. The storytelling in this episode, by Kek-W is a little jerky, and is overpowered by the visuals, but the depiction of a world collapsing into corruption is very, very effective.

CHORUS AND THE RING

Battle Sister Evangalista, a warrior for the Faith, ever hopeful of the miracle of the resurrection, begins her quest to retrieve the Signet Spritus of the dead War-Pontiff, Pius the Forty-Fifth. There’s always been a punk rock aesthetic to 2000AD, no surprise given the year it was first published. Chorus and Ring ably fits that spirit, taking different elements – religion, grandiose gods, warrior nuns – and throws them against the wall to see what sticks. This opening episode is all set up, with Evangalista proving herself to be an unwilling, if exemplary warrior, riddled with doubt about the efficacy of her faith. The artwork is a little rough, but when it gets going, as with the appearance of the AI Deus, a computer with a god-complex, you get a sense of what artist Mike Collins can achieve. One to watch.

With the Malign Lord finally defeated, his minions are hunted across the kingdom, chased by the Wretchfinders. But some of these minions were offered a deal – hunt down your own kind and live, or die screaming. Bode and Wrath are two such former followers of the Malign Lord, and boy, aint life Hell? The amusing thing about this series is that Bode and Wrath are two pretty incompetent minions of the now dead dark lord, who get by on luck more than skills powered by the forces of darkness. I’m not a fan of the art, but the way the writing deliberately undermines all the tropes of high fantasy is definitely amusing, and a key to enjoying this story.

2000AD has always been a bit of a curate’s egg – some great bits, and some not so great bits. 2000AD #2226 leans more to the latter than the former, which is a pity, as even some of the lesser stories have something to offer.