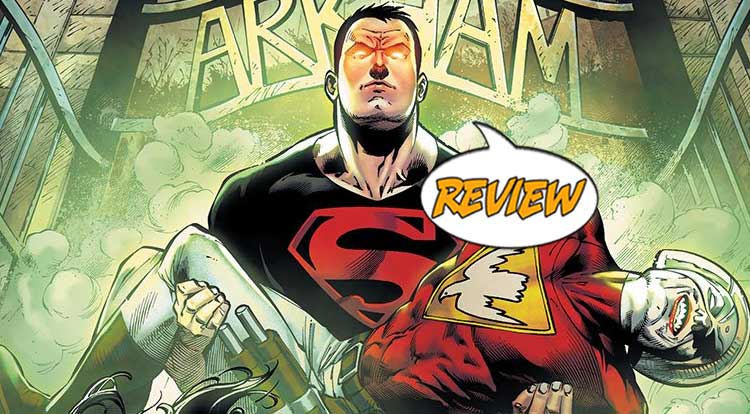 With Superboy under her thumb, Amanda Waller sets her sights on Arkham Asylum.  Time for explosions!  Your Major Spoilers review of Suicide Squad #2 from DC Comics awaits!

Previously in Suicide Squad:  With the power of Superboy now under her control, Task Force X mastermind Amanda Waller sends the hero into Arkham Asylum to rescue Peacemaker and bring Talon, the famed Court of Owls assassin, back to join the new Suicide Squad.  With lives hanging in the balance, the teen clone must decide if he’s going to assist Waller, even if it means getting his hands a little bloody along the way.

We open with first-person narration from Christopher Smith, The Peacemaker, outlining which parts of his convoluted history still matter and which don’t.  It’s actually quite well-done as exposition goes, leading us right into the mission to extract The Talon from Arkham… which has already gone pear-shaped.  The rest of the team arrives, consisting of Superboy, Bat-villain Nocturna and several folks we’ve never seen before, some of whom are likely doomed.  Peacemaker gets Talon out of his cell, but Superboy insists on trying to help the inmates of Arkham, which slows them down and costs two of the new characters their lives.  Seconds before Batman arrives, the team gets out, thanks to Waller setting off the Kryptonite bomb she installed in S-Boy’s head.  Once they return to base, Peacemaker dresses down Superboy with a horrific punchinnaface, while Waller realizes that they’re in need of new blood.

I can’t quite tell if Suicide Squad #2 takes place during the attack on Arkham that we saw in the Infinite Frontier books or whether or not this is a NEW assault, and honestly, either option is a storytelling problem.  This book wants to double-down on the brutal core of the Suicide Squad concepts, but it falls into the same trap that previous iterations of the book have: The guys you’ve never heard of are the ones who are going to die.  We know that they’re not going to kill Superboy, while Talon and Peacemaker are getting the Harley Quinn push that makes them at least temporarily invincible.  The bigger weakness for me is the relative lack of stakes: Two characters die, the team seemingly crosses Batman, Superboy likely has a broken jaw, and none of it feels like it matters.  From an art perspective, Pansica and Ferreira do an okay job, though the layout and blocking of the big fight sequence feels a little bit hazy for me.  Our main characters are pretty expressive, especially new girl Culebra, but the soldiers and guars of Arkham are interchangeable and lacking in detail.

BOTTOM LINE: WHY IS SUPERBOY HERE?

Suicide Squad #2 seems to believe that the shock value of a higher-tier character like Kon-El in this book will up the stakes, but the opposite comes through in the story, and both art and story feel like they need a bit more focus, but enough of this issue hits the mark to earn an above-average 3 out of 5 stars overall.  I hope that we get to fill out the roster in the next few issues, so that the deaths have a bit more meaning than the did this time around.

Also: I miss Superboy’s cool leather jacket that he only JUST got back.

There's potential in this new take on Peacemaker, but poor Superboy feels like an afterthought and much of the team feels underdeveloped, with an art job that's just okay.