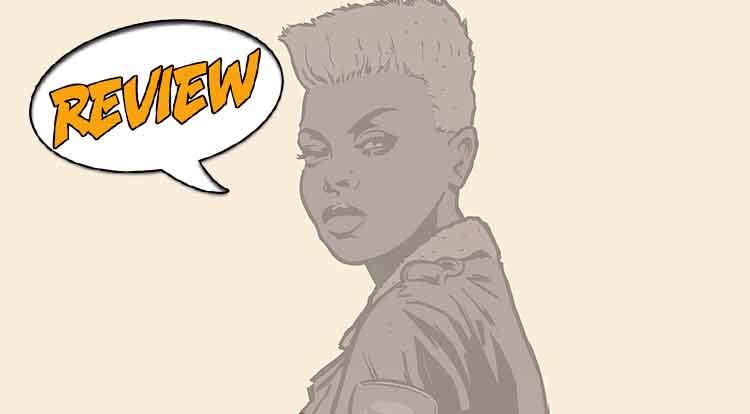 Almost two more months have passed with no word about Mac. Will Joe’s investigation lead her closer to the truth? Find out in Dead Dog’s Bite #2 from Dark Horse Comics!

Previously in Dead Dog’s Bite: Within the bounds of a Twilight Zone like framing, we learn that a young woman (Cormac Guffin) from the town of Pendermills has gone missing. Her friend Joe, a blunt young woman with a seizure disorder, seems to be the only one still looking for her. At a vigil for the missing Cormac, we meet the Mayor and Old Lady Pendermills, two eccentric characters. The Mayor is full of platitudes, but not much action. Joe leaves and finds Cormac’s boyfriend, Reggie, and talks him into taking her to where Cormac disappeared, the local Lover’s Leap. There are no clues.

A TOWN WITH A PAST

The narrator and his nine-panel page style greet us at the start of Dead Dog’s Bite #2. Almost two months have passed. Cormac Guffin is still missing. For everyone else in town, life is back to normal again. For everyone, that is, except Joe. We follow her out of town, through the snow, to a camper in the woods which is where she lives. The camper is starkly furnished, but one wall is covered with pictures and notes and string connecting things. Joe continues to investigate.

The next scene is at city hall where Joe, in a shirt with a Pendermills logo on it, tries to get in to see the Mayor. She talks poetically and enthusiastically about wanting to help him on his campaign, all to no avail. His gatekeeper, Ms. Hayfields, an older woman with an impressive red beehive hairdo, denies her.

It’s time for her meds. Joe tries to buy a Pendermills Peppermint Cola. The machine eats her dollar. She starts to swear at it, but the local Deputy interrupts her and offers to help. Getting his arm stuck in the machine is amusing, but when Joe tells Ms. Hayfields about it, she exclaims, “Not again!” and runs off to help him. This is Joe’s chance to slip into the office. She has a fascinating interaction with the Mayor, who at times does not seem to be in the same conversation she is in. She wants to see the registration book. He loudly tells her it is classified and he’s sorry. But then he drops it on his desk and walks out of the office looking for Ms. Hayfields.

Joe takes this opportunity and snaps some pictures of the ledger. Then she ducks out. The Chief of Police is eating lunch with her wife in the local diner. Her wife steps away, and Joe slips into the booth to tell her she found out something for Cormac’s case. Of all the people who signed the ledger on their eighteenth birthday, Cormac was the only one who signed in red. If only she knew where the older ledgers were. The Chief tells her she has to stop before she gets into trouble. And she certainly shouldn’t break into Patricia Pendermills’s office to look for the old ledgers she keeps there.

The symbolism of the red and white swirly logo is solved. Joe’s mother works at Pendermills Peppermints, which is a delightfully odd way for the town to have made its fame and fortune. And indeed, Patricia Pendermills in her swirly black and white dress is there where she can overlook the factory floor. Joe manages to steal some keys and returns after dark. Digging through old ledgers, she finds a handful of other names signed in red. She hears a noise and sees someone in a hooded poncho who runs off. She gives chase, only to trip and black out briefly. When she comes to, she finds the poncho lying next to her.

IS SOMETHING REALLY GOING ON?

The narrator of Dead Dog’s Bite #2 is an interesting framing device. In his powder blue suit, he is incongruous, enough so that we understand he really isn’t there. He tells stories that link obliquely to what is going on…or do they? But he fills in some time in the otherwise silent progression of panels that takes Joe to her camper. It wasn’t until my third read through that I saw the silhouette of a third person in one of the panels – and shame on me, because the narrator turns to look at them. And that’s an important thing for something that happens at the end of the book.

Pendermills is just so weird. Finding out that the big industry in town is peppermints (Pendermills Peppermint Cola, anyone?) is fascinating. But if that is the reason for the strong red and white theme throughout, that is more than quirky. That theme does continue. Ms. Hayfields’s towering hair, her glasses, and her chair are all peppermint red. The Mayor still wears his white suit with the red shirt and has his own wildly red hair. And if that wasn’t enough, the swirly logo keeps appearing in all kinds of unusual places. Is there a connection, or are these merely red herrings?

Dead Dog’s Bite #2 takes some close reading to catch that people are telling Joe things without telling her things. Is there a truth they want her to discover? Or are they setting her up? This book makes the reader feel like the proverbial fly on the wall, privy to secrets while not yet knowing how they connect.

The strangest people live in Pendermills, but are they hiding secrets?