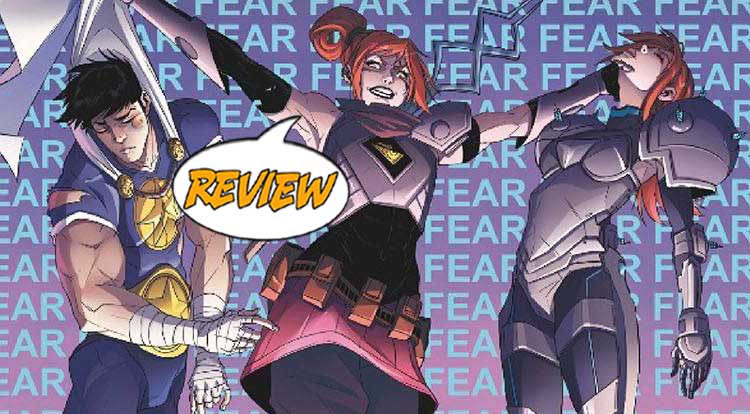 Crisis Command has to face a grim and uncertain future as the truth comes out.  Your Major Spoilers review of Commanders In Crisis #7 from Image Comics awaits! Previously in Commanders In Crisis:  The American Individuality Act moves forward as the world looks on in envy.  The loss of empathy has left few speed bumps on the road to worldwide chaos.  Can the Crisis Command’s hail Mary revelation about the Multiverse kickstart Earth’s caring?  And will Frontier escape the Lightning World in time for it to matter?

The Crisis Command (minus Frontier, who is busy in Lightning World) has called a press conference to announce the truth: They’re all from other realities, and they’re all former presidents.  This news doesn’t exactly go over easily with the general public, at least some of whom are of the opinion that people from other universes shouldn’t meddle in local affairs.  As the team deals with the fallout, Frontier and Thunder Woman visit the world of gods, and Frontier realizes that the strange nature of the imaginary world might allow them to return empathy to the world.  Thunder Woman isn’t sure that will work, but she’s at least willing to humor Frontier long enough to find out.  In Washington, the senators behind the American Individuality Act realize that they can’t ram through their legislation without repercussions, while Seer faces her own evil doubles, thanks to the villain called… Head Cannon!

Every issue of this book makes me wish more and more that it wasn’t a limited series, as Orlando and Tinto keep building on the world they’ve created here, showing us more heroes and villains, but also more regular folks that I’d like to read more about.  The ideas flow fast and furious this time around, with Lightning World acting as more than just an analogue for New Genesis or Asgard, and the man-in-the-street interviews are both hilarious and important to the overall narrative.  (The fact that Octobriana shows up for a split-second is also quite entertaining.) Tinto’s are is once again wonderful, providing more body types than most Big Two comics, as well as a wide variety of poses and facial expressions, and the Seer-versus-her-alternate-selves sequence is note perfect.  There are several moments where the coloring isn’t quite to my liking, but even that is a question of taste rather than one of quality.

BOTTOM LINE: THIS IS A FUN COMIC BOOK

In short, Commanders in Crisis #7 is equal parts thoughtful, frenetic, clever and heartfelt, with strong art and story combining for the kind of reading experience I could only dream about in the ’80s, earning 4.5 out of 5 stars overall.  If you’re looking for a comic that balances adventure, reality and the difficult matter of representation in one good-looking package, this is the book for you.

This series is worth the price of admission just for the clever character names and concepts, but the depth of the story is cake under that icing.