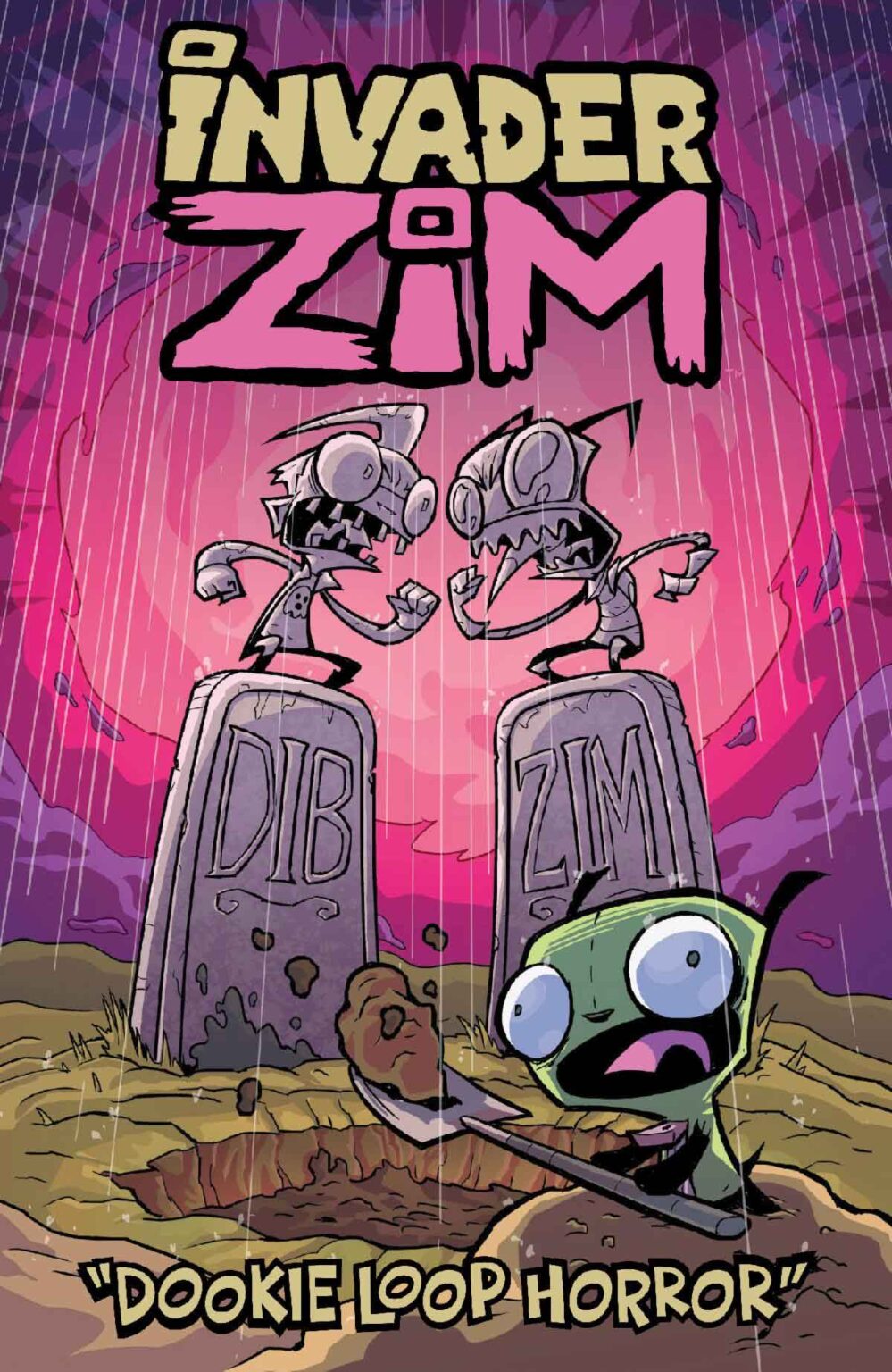 Oni-Lion Forge Publishing Group and Nickelodeon are thrilled to bring you the final installment of the Invader ZIM original single-issue comics in time for the 20th anniversary of Invader ZIM — Invader ZIM: The Dookie Loop Horror, written by Jhonen Vasquez and Eric Trueheart, with illustrations by Aaron Alexovich, colors by Fred C. Stresing, and lettering by Warren Wucinich. The oversized single issue will be out in August 2021. “When I heard that we were reaching the final issue of the Invader ZIM comics, I immediately started thinking of ways to end it as stupidly as possible, which is a pretty big challenge considering the levels of stupid the comic had already gone to,” said Jhonen Vasquez, creator of Johnny the Homicidal Maniac, Invader ZIM, Squee!, Fillerbunny, and more. “My only hope is that when people read it, their brains won’t work anymore. That’s how I’ll know we did our jobs right.” Most recently Vasquez worked with Nickelodeon to bring Invader ZIM back in the 2019 Netflix movie event, Invader ZIM: Enter the Florpus.

“We knew we wanted to do something special for the big finale of the Invader ZIM comics, but when I emailed Jhonen asking if he’d like to illustrate a cover, I wasn’t expecting him to one-up us by signing on to co-write the entire thing,” said Jasmine Amiri, Senior Editor at Oni-Lion Forge. “From that kick-off through to the end, this issue surpassed expectations. The entire creative team brought their A game, and I can’t wait to share this bizarro, extremely ZIM final issue with everyone.”

In Invader ZIM: Dookie Loop Horror, up in the sky, something…BLUE approaches. And it smells HORRIBLE. It turns out that interdimensional creatures called Chrono-Dumpers eat time and use our dimension as a toilet, creating an infinite time loop. There is no escape from the time poop loop, forcing Dib and ZIM to live the same TERRIBLE day forEVER. They wake, the tuxedoed pig farts, the world ends. And the key to fixing the loop is GIR. We are all DOOMED.

And everyone came for the end of the world party—or at least, that was why Aaron Alexovich showed up. “I came back one last time to make sure Invader ZIM was well and truly DEAD once and for all. If we’ve done our job right, his curse will never infect anyone ever again. The world might finally be free. Also, it was fun to draw a fancy pig.”

For Eric Trueheart, the reason was more simple. “When Jhonen asked me if I wanted to work with him on The Dookie Loop Horror, I said, ‘You had me at Dookie.’ And it turns out I really like loops.”

Fred C. Stresing had this to add: “Glad to have been a part of the Invader ZIM comics for so long, and even gladder to see this last issue through with a bang. A disgusting, messy bang. And you won’t believe who is back in this final issue! (Minimoose. It’s Minimoose.)”

But it was Warren Wucinich, long-time Invader ZIM letterer, who summed it up best: “So it all comes down to dookie and a fancy pig. I wouldn’t have it any other way.”

Variant covers of the oversize 32-page final issue will feature art by Jhonen Vasquez, Cole Ott, J.R. Goldberg, and Aaron Alexovich. Invader Zim: The Dookie Loop Horror will be available on August 4, 2021, in stores and online via comiXology.

Jhonen Vasquez is a writer and artist who walks in many worlds, not unlike Blade, only without having to drink blood-serum to survive the curse that is also his greatest power (still talking about Blade here). He’s worked in comics and animation and is the creator of Invader ZIM, a fact that haunts him to this day.

Eric Trueheart was one of the original writers on the Invader ZIM television series back when there was a thing called “television.” Since then, he’s made a living writing moderately inappropriate things for people who make entertainment for children, including Dreamworks Animation, Cartoon Network, Disney TV, PBS, Hasbro, and others. Upon reading this list, he now thinks he maybe should have become a dentist—and he hates teeth.

Fred C. Stresing is a colorist, artist, writer, and letterer for a variety of comics. You may recognize his work from Invader ZIM. He has been making comics his whole life, from the age of six. He has gotten much better since then. He currently resides in Savannah, Georgia, with his wife and two cats. He doesn’t know how the cats got there; they are not his.

Warren Wucinich is an illustrator, colorist, and part-time carny currently living in Dallas, Texas. When not making comics, he can usually be found watching old Twilight Zone episodes and eating large amounts of pie.