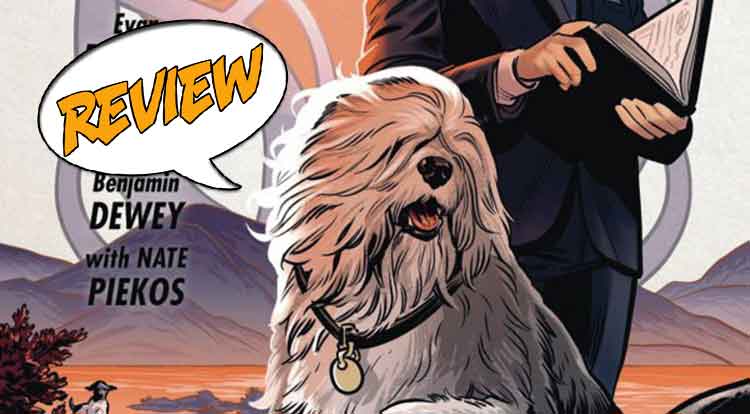 As the Wise Dogs recuperate, Emrys tells a tale from his past. What sort of supernatural creatures were in Japan in the late 1940’s? Find out in Beasts of Burden: Occupied Territory #1 from Dark Horse Comics!

Previously in Beasts of Burden: The Wise Dogs of Burden Hill investigated a bunch of supernatural disturbances that stared out with a fire salamander and ended with them tackling a survivalist witch-cult intent on summoning more monstrosities into the world. Through their teamwork, not to mention a touch of magic, they saved the day, but not without some serious injuries.

TALES FROM THE PAST

Beasts of Burden: Occupied Territory #1 sets the scene with a small house with magical symbols in the trees – and the fire salamander dozing in the yard. And if you are new to the Beasts of Burden, you won’t be lost. The dogs immediately start in talking with Dempsey complaining about the salamander and comparing it to a cat. Then he remembers they have a cat who has helped them, and he starts in on a tirade about what’s coming next. Wombats, perhaps? He and Brigid join the rest of the Wise Dogs in Arthur’s study where they’re sharing stories.

This is the frame for this arc with Emrys. There is a picture of him and Huxley along with a Shiba Inu who is a friend, he explains, from after the war, by which he means World War II. Considering we’re starting in the present day, that give us a new perspective on how long-lived Wise Dogs can be. The story opens in 1947 at Ogawara Air Base in northern Japan. Emrys is there with his companion at the time, Jonathan Hope.

They are taken to see Colonel Rhodes. The conversation opens blandly enough. Everyone has heard ghost stories, and most of them are something entirely mundane. But the Colonel’s men have started having nightmares and a couple men have died in unusual circumstances. There is a break as the men notice Emrys, who has been sniffing around the room and now has his paws on the Colonel’s desk, almost as though he’s reading the paperwork there.

Then they make a quick visit to the morgue to see one of the bodies. Its head has literally been torn off the body with great force. There is also the obligatory reminder that this is all technically unofficial. Jonathan and Emrys are on their own.

Back at their hotel, Emrys and Jonathan talk things over. Emrys was indeed reading, and he found mention of an unusual creature sighting the Colonel didn’t mention to them – a sort of walking octopus. And then it’s on to the investigation, first human style, and then Emrys checks out the local animal life. He finds a black and white stray dog who found a bone and is immediately challenged by a couple other dogs. Emrys uses magic to light the bone on fire and gets it back for the dog who agrees to be his guide. The dog has no name, and Emrys names him Mullins, after the comic character Moon Mullins.

One magic potion later, and Mullins gains the ability to understand other languages. Emrys wants to do a little more investigating and maybe see if he can track the weirder-than-usual smell the corpse had. Jonathan insists he be careful and not take off on any leads by himself. The first part of the night is uneventful, but then Emrys catches a whiff of the smell he’s been looking for. The trail leads them to three people at a small shrine who suddenly collapse – dead!

The art of Beasts of Burden: Occupied Territory #1 is fantastic. The humans are wonderfully drawn, but the dogs breathe so much life into the story. The challenge with Wise Dogs is that they are dogs, not anthropomorphic animal pals. Emrys can talk to Jonathan, but not to every human. And throughout the book there are thoroughly delightful doggy moments. When Jonathan and Emrys are driven to headquarters, Emrys sits with his paws over the side of the Jeep and lets his tongue dangle in the wind. Despite the seriousness of the paranormal happenings, these dogs can enjoy life.

I also like the couple investigation montages and the way the complement each other. They’re each drawn in a series of wordless panels, wide enough to be panoramic. There is a lot of depth to the art and it is a pleasure to let your eye be drawn through each one. It also gives us some glimpses of life in Japan after the War. The daytime investigation looks just like that – seeing things, talking with people, examining places. The nighttime investigation introduces the fact that Emrys, and now Mullins, can see ghosts. And there are a lot of ghosts to see. This particular page is almost ethereal in its beauty.

BOTTOM LINE: OFF TO ANOTHER INTRIGUING ADVENTURE!

If you love supernatural mysteries, or dogs, or both, Beasts of Burden: Occupied Territory #1 is a great read. There is just enough humor to provide balance for the creepiness, and story is starting out top-notch.

Emrys reaches into his past to relate a story of the supernatural set in Japan after WW2.