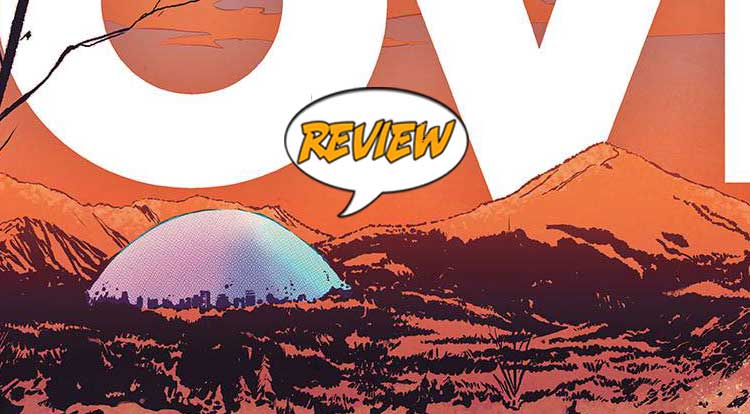 This war’s no secret and the number of Earths in crisis is unknown, but things are about to get stabby.  Your Major Spoilers review of Crossover #5 from Image Comics awaits!

Previously in Crossover:  It’s all come to this.  What awaits our heroes at ground zero?  What is the nefarious Father Lowe up to in that basement of his?  Who the hell is narrating this book?  Where am I?  What’s happening??

REALITY IS DEAD… ANYTHING IS POSSIBLE

As Crossover #5 opens, our unseen narrator warns readers that things are about to get really bad, and the story doesn’t disappoint.  The “superhero” being tortured in a previous issue arrives at a superhero holding facility to be put away, heavily beaten and with his tongue removed.  He tries to warn his captors, but before anyone can figure out what is going on, the bomb in his chest explodes, taking out the prison.  Elsewhere, the fictional heroes of The Paybacks and Frank “Madman” Einstein, along with a few real people (whatever that means) hear the news and realize that they have to make a break for it.  With the help of Valofax, the sword god of all swords, they break free and begin to make their way across the ruins of Denver, where an as-yet undefined disaster has occurred.  Of course, that journey is complicated somewhat by The Amalgams, monstrous Frankensteined versions of the lost superheroes.

WHO *IS* NARRATING THIS BOOK?

The metatextual nature of Crossover #5 is both a huge draw and off-putting as hell to me, as the fictional superhero characters are all visually defined by Ben Day dots, reminding us that they’re from comic books, but the dot effects are HUGE.  The fact that someone semi-omniscient is narrating adds to that confusion/discomfort for me, but the overall story still has a lot going for it.  When one of the “fakes” starts to go mad and blow up the human soldiers, Madman gives the fictional sword to Ellie, our point-of-view character, and we get to see a fascinating perspective on what wielders of the God of Swords see.  It’s a very impressive moment from artist Shaw, using pieces of art from the creators of Valofax and Madman in a beautiful collage.  After reading this issue, I quickly went back to read the first four, and if I have any major complaint about it, it’s that all the crossover folks save for Madman are creations of Donny Cates, which for some reason feels like the kind of thing someone should have mentioned in the story.

BOTTOM LINE: I ENJOYED THIS

Moment of meta discomfort aside, Crossover #5 was an unexpectedly enjoyable book for me (especially since I have only a passing familiarity with anyone in it but Madman), delivering a hybrid of big company crossover and wild Morrisonian genre-bending, with strong art that overcomes even a troublesome visual metaphor to deliver 4 out of 5 stars overall.  I’ll definitely be back for more of this book, if only to figure out the identity of the narrator, and I hope that we see more “fake” characters joining the cast.

I have to say, I had not idea what to expect from this issue and I was definitely surprised and more than a little impressed.