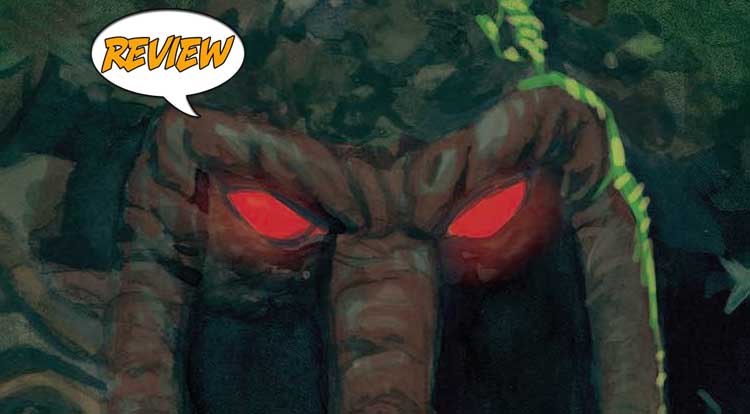 Avengers: Curse of the Man-Thing #1 Review

All that knows fear burns at the touch of the Man-Thing.  But what happens if fear envelops the entire world?  Your Major Spoilers review of Avengers: Curse of the Man-Thing #1 from Marvel Comics awaits!

AVENGERS: CURSE OF THE MAN-THING #1

Previously in Avengers: Curse of the Man-Thing:  For decades, the Man-Thing has haunted the Florida Everglades.  Now a new enemy has hijacked his body on a quest to take his incendiary abilities global!  We wake to fear as gargantuan monoliths menace cities worldwide, with only the Avengers standing between the population of Earth and a planetwide inferno.

“THE HARROWING OF EARTH STARTS AT SUNRISE.”

We open in a secret underground base, the home of rogue botanists known as Hordeculture.  (Heh.)  The assembled bio-engineers are geniuses, but they’re also now all elderly, with their newest would-be member insisting that she knows how to save Earth’s biome: Wipe out the pesky humans.  They reject her plan, but Harriet goes ahead anyway, using a combination of magic and technology to find and destroy The Man-Thing.  Soon after, The Avengers assemble in response to a series of strange towers of vegetation around the world, Through trial and error, they discover that the monoliths are causing people to burst into flame, but each victim breathes out a cloud of spores to infect more people, making them into living grenades of planet matter.  And then, Captain America is absorbed by one of the vines, drawn into the soul of what remains of the Man-Thing to meet Dr. Ted Sallis, who died so many years ago to give life to ol’ Manny.  When Cap tries to tell Sallis that they can work together to undo the damage Harriet has done, Ted explains the terrible truth: He doesn’t understand the serum because… he didn’t make it.

The difficulty in writing any Man-Thing story is one of perspective, as the monster itself really doesn’t have a mind or perspective.  Thus, you have to surround Man-Thing with interesting characters, a thought process that gave us Howard The Duck, among others.  Avengers: Curse of the Man-Thing #1 succeeds on that front by using the Avengers as our point-of-view character, though really only Captain America, Captain Marvel and Hulk/She-Hulk get any real screen time to play with.  It’s nice to have that sort of focal point, though, and the unexpected return of Sallis is interesting.  Mobili’s art is equally impressive, making everyone look really impressive, especially Captain America. The coloring is less so, as Man-Thing looks oddly blue as he arrives on the scene, and most every page feels like the saturation has been dialed up a little too much.  In a story that features so many bright red characters and repeated bursts of flame (not to mention Ghost Rider, who is always on fire), it gets a bit distracting.

With so many modern takes focusing on the character’s name and how odd it sounded with the Giant-Size initiative of the ’70s, it’s good to see a comic book story that honors the long history of really well-done, off-beat stories that Man-Thing has starred in.  Avengers: Curse of the Man-Thing #1 reads quite well and looks good, even with the coloring issues, and sets up an interesting premise for the big anniversary, earning 3.5 out of 5 stars overall.  And best of all?  It manages to break new ground without reminding me of Swamp Thing’s adventures, which is probably the biggest challenge of any Man-Thing tale.

AVENGERS: CURSE OF THE MAN-THING #1

This issue feels like a throwback to Bronze Age storytelling, thanks to a tight script and better-than-average art, and that last-page reveal? It's a shocker.