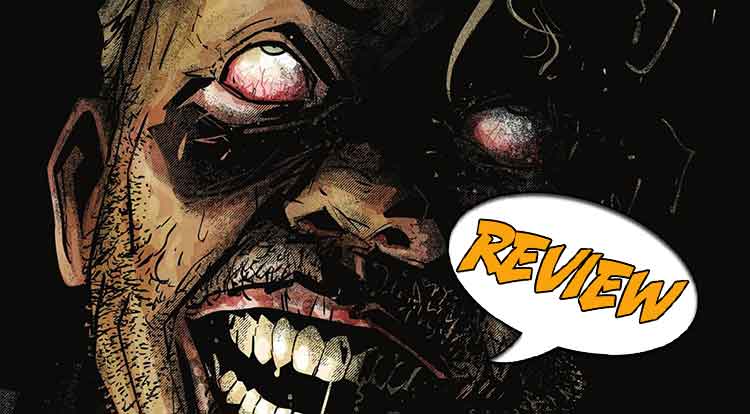 In Sea of Sorrows #4,  paranoia has ripped apart the crew of the SS Vagabond.  The lure of Nazi gold is strong, but the fatal song of the Siren is stronger still.  Will anyone survive long enough to spend all that gold?  Find out in your next mighty Major Spoilers review!

Previously in Sea of Sorrows:  The North Atlantic is lousy with sunken ships, especially the convoys that braved those waters during World War 2, sailing to outrace the wolf-packs of U-Boats harrying them all the way. Those ships at the bottom present an awesome salvage prospect, and when one naval officer discovers the site of a sunken U-Boat, laden with Nazi gold, the chance at untold wealth is too tempting.  But the sea holds stranger terrors that mere sunken vessels, and the siren call of gold isn’t the only fatal song these salvagers will face…

DOWN AMONGST THE DEAD MEN

Horror comes in many flavors, none more salty than Sea of Sorrows #4.  Nautical horror is a fun sub-genre, a chance to experience fears and terror away from the comforting safety of dry land.  Here, out on the waves, there is no sure-footing to take comfort in – instead, mother nature is out to get you, if the sunken horrors of the deep don’t.

There is a lot to love and enjoy about Sea of Sorrows #4.  There is an abiding sense that everyone is in perilous danger, from nameless crew members punching on as paranoia ripples through the SS Vagabond, all the way up to the main protagonist, Sofia.  The more mundane drama of a crew at odds with itself, ripped apart by the lure of gold and the fear their share will be taken from them, provides the broader canvas upon which a terrifying evil is sketched.

Those of a classical bent will remember the story of Odysseus journeying home after the Trojan War, and encountering all sorts of mythological creatures.  As a boy, it was the Sirens, with their beauty and bewitching singing that captured my imagination.  In the hands of Richard Douek, and especially artist Alex Cormack, their version of the Siren is a sinister, voluptuous monster, hellbent on death and destruction.

Cormack pulls out all the stops in Sea of Sorrows #4, especially with the horribly claustrophobic underwater scenes that open and intersperse the issue.  With characters depicted in old time diving suits, Cormack goes all out in depicting the cramped spaces they inhibit, trapped within canvas and steel.  Crazed eyes peer out of diving helmets, mouths hanging open in silent screams that only the trapped diver can hear.  Their link to the surface is tenuous at best, and they float trapped beneath the waves, as rotting bodies float around them.  These scenes of horror are amongst the finest you will see this year, and raise that sense of impending doom to a fever pitch.

On board the SS Vanguard, Cormack does just as well.  The Siren appears able to possess those unfortunate to hear its alluring song (depicted in the artwork as a long string of musical notes, winding through the panels as sinuously as the snake-tailed Siren does) and Douek goes all out to depict the betrayal and violence that follows.

Like a dozen movies and books before it, Sea of Sorrows #4 makes great use of its base under siege format.  The fighting on deck is supplemented with a storm blowing overhead, making the elements one of the participants.  There are very few places on the SS Vagabond to hide, and those that do exist are remote and in darkness.  As the tension ramps up, as the violence on board the ship continues, as the Siren sings its song of entrapment, you can feel yourself sucked into the horrible mix.  Sea of Sorrows #4 is perfectly designed to be read on a dark and stormy Saturday afternoon, with the curtains drawn, the lights dimmed, and the radio muttering quietly to itself.  That music, is it…

Sea of Sorrows #4 is an absorbing reading experience, as Douek and Cormack suck you into the claustrophobic world the SS Vanguard has sailed into.  Filled with strong characters, expressive art, and a monster unlike any you’ve experienced before, this issue stands out as one of the best horror comics of 2021 so far.

Strong setting, loads of atmosphere, rising tension, and a scary monster that seductively insinuates its evil into the hapless characters, Sea of Sorrows #4 is an issue for every fan of horror!