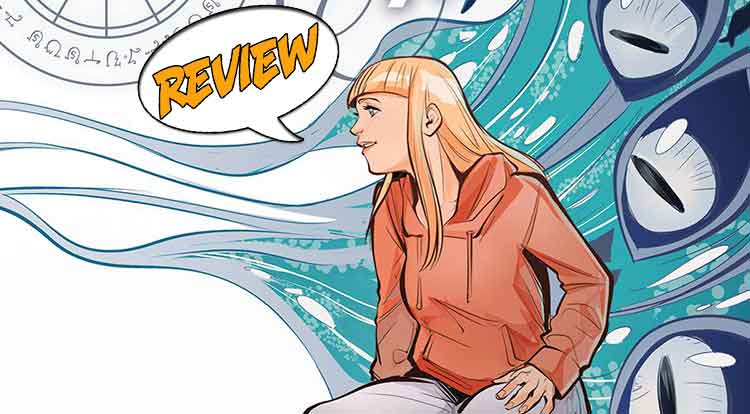 In a city full of magic and wonder, what’s it like being an adult after having accomplished your goals by 7th grade? Your Major Spoilers review of Destiny, NY #1 from Black Mask Studios, awaits!

Previously in Destiny, NY: Logan grew up in a boarding school for children with magical prophecies, but she fulfilled her destiny so young that she’s now having a midlife crisis despite being in her 20s.

SEX, PROPHECY, AND THE CITY

Destiny, NY #1 starts off back in 2002, where Logan and her girlfriend Bailey are filming a commercial for their school for kids born into magical prophecies.  After slipping away for a little closet makeout session, Logan suddenly triggers her destiny.  Flashforward to the present day and Logan is looking at Bailey’s engagement announcement, to someone else.  She then sets out to go about her day.  Along the way she meets Lilith who helps her with a situation, she then runs into her old friend Gia, who has finally discovered the details to their great purpose, she runs into Lilith again, they decide to go out on a date.  Elsewhere we see that Gia’s destiny is closely tied with Lilith, who is up to some mysterious doings of her own that ultimately leads her into a scuffle with some unsavory characters.

WHERE HAVE I READ THIS?

Typically I don’t read the solicitations before I read a comic. I say that, to explain this; The entire time i was reading this issue I had this nagging sense of nostalgia right at the back of my head.  From the rapid-fire dialog, to the down and out main character, to the scrappy woman who comes into her life, to the meek male character in the background, even the black and white art and the very stark panel layout kept reminding me of something.  Then I read the solicitation and there it was, plain as day.  “… this exuberantly youthful and achingly heartfelt ongoing series feels like Strangers in Paradise set in a magical NYC”.  Here’s the thing, the solicitation is not wrong.  This story comes straight from the Terry Moore school of ensemble, soap-opera, “everyone’s connected” style comic book storytelling (they even got him to do a variant cover).  The magic element and how that’s realized and utilized is a nice addition to that formula. Now, because of the similarities to Strangers In Paradise this issue doesn’t feel very original, but that’s clearly not the intention. Now, just because it’s a well-executed homage, doesn’t mean it’s perfect, especially since what it’s homaging had issues itself.  This comic has its fair share of cliches.  In particular, the sex-obsessed, gay, barista, co-worker stood out in particular.

THE BOTTOM LINE:  AN ENDEARING THROWBACK

Destiny, NY #1 does not feel like a modern comic book, for better or worse.  Everything about this issue, from the lovely black and white art, to the dialog dripping in snarky quips,  is designed to evoke a feeling from a time gone by when you’d see a comic like this on that rack tucked behind the Image titles <or insert personal comic book store from mid-90s to early 2000s story here>.  Basically, it’s a good homage to the slice-of-life/romance/drama comics gone by that adds it’s own little twist to make it, somewhat, its own thing.  4 out of 5 stars.

Destiny, NY #1 knows exactly what it is and does not try to hide it. It wants to be an introductory issue to a series modeled after Strangers In Paradise, with just enough of it’s own thing. And, it does that.