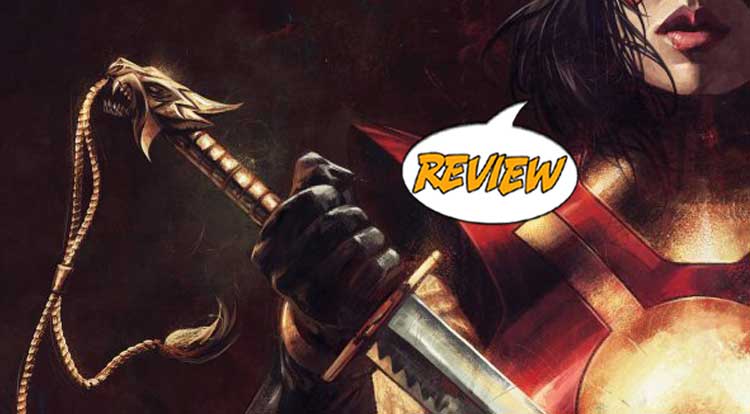 The Other History of the DC Universe #3 Review

Tatsu Yamashiro is gone…  now there is only Katana.  Your Major Spoilers review of The Other History of the DC Universe #3 from DC Comics awaits!

THE OTHER HISTORY OF THE DC UNIVERSE #3

Previously in The Other History of the DC Universe:  1983.  Japan.  Tatsu Yamashiro’s life has been taken from her.  Her home, her children, her husband are all gone.  With nothing left but a burning pain and the sword that stole her family from her, Tatsu begins a long journey of healing, self-discovery, agency, and rebirth.  This is the story of Tatsu Yamashiro, the woman known to many as Katana-a hero who became more than the world ever intended for her, ultimately making a family of like-minded Outsiders who rally together for the common good amidst xenophobia and oppression.

Once again, this issue is told first-person by the hero it describes, in this case, Katana of the Outsiders.  She explains how she lost her family and how she came to own the sword called Soultaker.  (It’s a slightly different story than the one I read in the pages of ‘Batman and the Outsiders’ thirty years ago, including the fact that the sword isn’t magical, except by reputation.)  She travels the world, killing people without guilt or remorse, eventually finding her way to Markovia, where she meets Batman and falls in with his Outsiders.  The story is tied together to the era in which she originated, so the attitudes of the ’80s are represented in these pages, especially as it refers to Japanese culture and the role of a widow.  Tatsu provides excellent analysis of Batman, especially when he arranges for her to become the guardian of Halo, and her takes on the other members of the Outsiders are equally interesting.  We even get explanations of where Katana went during times when her book wasn’t being published, bringing us to her current status as on-again/off-again member of the Suicide Squad.

I’M BOTHERED BY THE ALTERATIONS HERE

This story is very engaging, and provides a fascinating look into the mind of one of the marginalized characters of the DC Universe.  As with Black Lightning’s story and Mal & Karen’s in previous issues, it approximates “real time” in its analysis of characters and the world they came from, but this issue takes a few more liberties than theirs.  The changes to Tatsu’s story remove the occult elements of her sword, instead positing her as a woman driven to kill out of grief and rage, which alters the story of how she became an Outsider in the first place.  Still, her astute analysis of the Outsiders (including a really good read on the human being inside The Batman) makes for wonderful reading, while Camuncoli delivers with graphics that homage creators past while showing us something entirely new.  There are moments that ape Jim Aparo here that still feel like their own unique style, and the beauty of these pages is breath-taking.

BOTTOM LINE: WELL WORTH THE PRICE

The Other History of the DC Universe #3 is the most visually arresting issue of a series that has never been less than beautiful, but it’s married with a story that works perfectly, overcoming my worries about alterations to Katan’s back story to deliver a wonderful experience that earns 5 out of 5 stars overall.  As someone who fell in love with Tatsu Yamashiro’s character back in 1984, it’s wonderful to see her get her due in such a high-profile manner, and her withering analysis of The Force of July is worth $6.99 in itself.