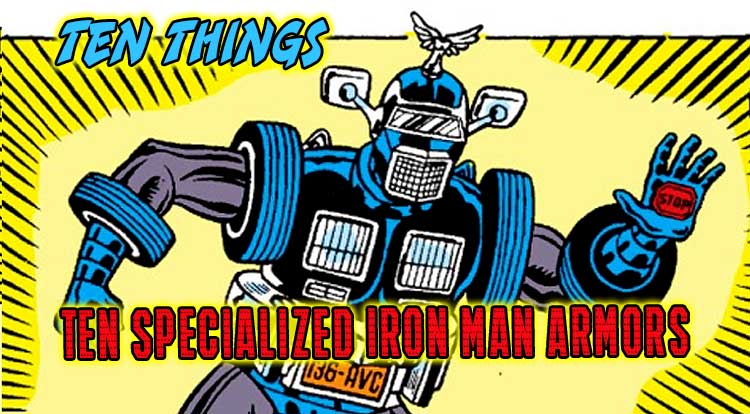 Tony Stark makes you feel he’s a cool exec with a heart of steel. And he’s ready for nearly any contingency! Welcome to Ten Things: Ten Specialized Iron Man Armors!

Whooshman-Bicarbonate Films, in conjunction with An Amateur Comics Historian and those precious chase variant figures, Presents: Though his normal armor is water-tight, this specialized submarine unit can travel to depths of up to 3 miles. He also adapted the weapons to include mini-torpedoes and an electric repulsion field based on that of the electric eel. Iron Man initially used this armor to descend to the wreck of HMS Titanic (the resting place of which had just been discovered circa the mid-80s) in search of a special nerve gas or something, In addition to it’s submarine functions, an inner armor can actually be jettisoned for emergency surfacing, a trick that kept Tony Stark from a watery grave. A prototype model for tunneling and digging, this unit was never actually seen in action until it was remotely activated by the son of Ho Yinsen, co-creator of the original Iron Man armor. Constructed partially of Antarctic Vibranium (aka Anti-Metal), this unit was one of five Argonaut class units, all of which were sent on mindless rampages. Fortunately, The Thing was able to cause this armor to collide another Argonaut model, destroying both armors completely. Powered by a mystical Asgardian jewel and patterned after the indestructible Destroyer of Asgardian lore, this armor is teeming with mystical energies and capable of standing against the Thunder God himself. Though it was a valiant attempt by Iron Man, the armor wasn’t up to the task of defeating Thor, who ended up destroying the suit and forcing Tony to eject. It did, however, allow Tony to stop Mjolnir in mid-flight, which is no small feat. In the strictest sense, the first Hulkbuster armor is actually an upgrade for the then-current Modular Armor, created to emphasize versatility and adaptability. It came in handy when The Hulk came calling about the mass production of Gamma Bombs, as the unit’s “magno-hydraulic pseudo-musculature” upgraded Iron Man’s physical power to challenge the Green Goliath. At one point, the Hulkbuster Armor was given it’s own designation (Model 14), but has since been reclassified as a variation of Model 13. The base armor is the one worn during Iron Man’s ’90s cartoon incarnation. An incredibly powerful armor designed to disrupt the cosmic energy being known as The Phoenix, the “Killer” part of its name turned out to be a little optimistic. It was, however, able to fragment the creature into five smaller Phoenixes that possessed Cyclops, Colossus, Magik, The Sub-Mariner and The White Queen. The particulars of this armor’s power sources and technology are unrevealed, but that massive chest-mounted uni-beam makes it clear that this suit is primary meant to act as a cannon. Specially designed for cold-weather operations, most of its operative functions were never shown. The reconfigured uni-beam and what seem to be gauntlet-launchers of some sort seem to imply additional or altered weapons capacity, but it was only ever used when Iron Man needed to visit his secret Arctic bunker. I don’t know for sure that a toy was made of this costume, but it came shortly after Marvel purchased ToyBiz, so I wouldn’t be surprised if it was created solely to get a new action figure on the shelves. Designed for extended use in zero-gravity, this unit is powered by fusion and contains extended life support functions and additional upgraded weaponry. The concomitant bulk makes it difficult to maneuver inside an atmosphere, but it contains sensors, extensible exo-arms and storage bays for any interesting moon rocks he discovers. Both the Model 10 and Model 45 armors are also made for extended use in space, each improving on this armor’s functions while never quite looking as cool. One of the rare Iron Man models actually made of just plain iron, this heavy metal suit provided not only protection from harm but from the magicks of Malekith, King of the Dark Elves. Likewise, it’s weapons were different, from the iron claws for slashing evil elves to the “cloud of nails” feature, forgoing Iron Man’s usual dependence on energy weapons in lieu of cold iron, all the better to go to war with Svartalfheim.

I think Svartalfheim was the guy that Arthur and Ford met on Magrathea, right? Perhaps the coolest Iron Man armor of the classic series, this all-black ensemble predates Spidey’s Venom-costume by a full three years. With its focus on stealth, this unit is less protective than a standard Iron Man armor, and it initially had no weapons systems at all. That caused problems in later applications, as Tony brought it out of mothballs to infiltrate Soviet airspace, leading to the accidental death of the second Titanium Man during the Armor Wars. Had he been armed with conventional armor and weapons, he likely could have escaped the conflict without fatalities. As the Thor, Hulk and Phoenix specialized defensive armors already covered show us, Iron Man gives only the most dangerous threats their own specialized suits.  Thus, when forced to face an evil clone of Squirrel Girl, he busted out the most versatile armor of all.  Sharp-eyed Marvel fans will note that this armor bears a striking resemblance to the movie Hulkbuster armor, proving once and for all that the Unbeatable Squirrel Girl is the most awe-inspiring hero that comic books have to offer. Also, the little squirrel face is good for camouflage, perhaps…

This week’s topic, Ten Specialized Iron Man Armors, is all me but feel free to follow along @MightyKingCobra for more Ten Things madness on Twitter!  Or, you can check out the full Twitter archive here!  As with any set of like items, these aren’t meant to be hard and fast or absolutely complete, if only because Iron Man is one of the very few superheroes to regularly change their look, thanks to the ever-onward march of technology.  Either way, the comments section is below for just such an emergency, but, as always: Please, no wagering!