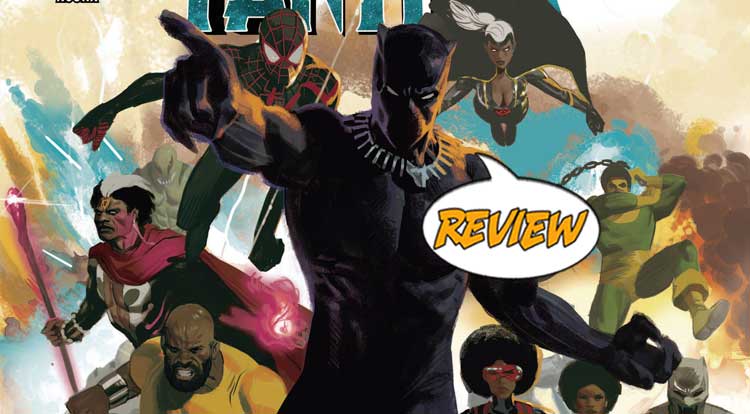 With his allies by his side, T’Challa faces the intergalactic empire that shares the name of his homeland…  Your Major Spoilers review of Black Panther #24 from Marvel Comics awaits!

Previously in Black Panther:  The Intergalactic Empire has suffered thousands of losses – and still they’re coming for Earth. Wakanda Prime is in more danger than ever as Emperor N’Jadaka (AKA the resurrected Killmonger, one of the Black Panther’s deadliest enemies) returns to face the king who unintentionally brought him to power.

With his allies assembled in Wakanda, T’Challa puts the strategy in the hands of Prodigy, former X-Man and Young Avenger.  When the attack comes, he marshals his forces to defend Wakanda, as Prodigy calls the shots.  it’s really impressive, both visually and contextually, as we see him using the assembled heroes to defend the city, with Luke Cage, Ironheart, Storm and even Vibraxas taking the field.  X-Man Gentle is nearly overwhelmed, but finds himself saved by “Finger of Death” protocol, with is to say, Nick Fury with a sniper rifle and both Patriots, Eli Bradley and Rayshaun Lucas.  It’s an impressive moment in an issue full of them, but their fight proves to be futile, as the alien empire continues to advance.  N’jadaka, possessing the spirit of the long-dead Killmonger, arrives to gloat, but The Black Panther informs him that he knows nothing of Wakanda, and nothing of honor…

…and that’s when the LITERAL GODS OF WAKANDA arrive through a portal.

This issue is fun on a number of levels, but I most appreciate how it intentionally invokes ‘Avengers: Endgame’, using similar escalation and arrival moments, and really selling the power and might of characters like Prodigy, Storm and Misty Knight.  The use of so many of Marvel’s POC characters also feels appropriate, even if some readers are absolutely going to whine about where Captain America and iron Man are.  Acuña’s art is stunning  throughout the issue, providing page after page of pure spectacle, making even Thunderball of the Wrecking Crew look incredible.  My only complaint visually comes in the darkness of some of the coloring, and even that feel like an intentional move by the artist that doesn’t quite come off in the printing.  Best of all, it’s an issue that FEELS epic from top to bottom, building to the end of Coates’ run on Captain America next time around and really selling the importance and the drama of what we’re witnessing.

In short, Black Panther #24 takes advantage of years of continuity, the high-profile MCU and even real-life to deliver an action-packed comic that looks great and sets up an epic confrontation to end this arc, earning 4.5 out of 5 stars overall.  There’s something here for everyone, especially if you’re looking for a really well-done action issue.

A cast featuring most of the Black heroes of the Marvel Universe facing an endless onslaught of alien invaders, makes for a fascinating all-action issue worth it's price tag.