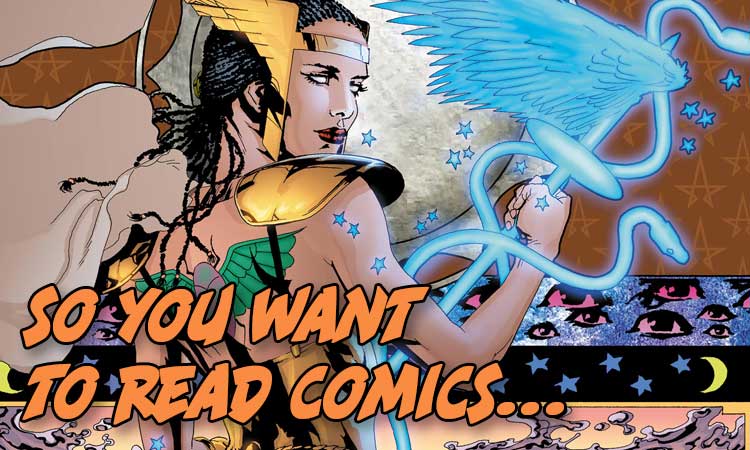 So You Want To Read Comics: Personal Philosophies Edition

I think, therefore it’s time for “So You Want To Read Comics”, our weekly feature where we take a look at a topic and then offer up recommendations for new comic book readers, based on that topic. This week we’re looking at examples of comics based on their creators personal philosophies.

In the comic book industry there are many names that have a certain gravitas and legacy tied to them. Yet, there are two who have such distinct and vivid collections of beliefs and philosophies and also utilize their comic creations and the medium itself to portray and explain these thoughts: Alan Moore and Grant Morrison. While the details of these two’s philosophies are too vast to layout here, this is a layman’s version. Both of these creators see themselves as real life magicians where the magic is related to existence itself, how it’s perceived, and one’s agency over that. Of course, these two have very different approaches to these things, the conclusion remains.

But, the details of these two philosophies are better explained in context of their creations and while there isn’t a single book from either of them that contains a complete depiction of their views, each one of them contains a piece of the whole. So, here’s a couple of those pieces.

One part of Grant Morrison’s philosophy is that humanity and its consciousness is a sort of organism in itself. That means that our “good” morals aren’t just for the sake of being nice to each other but that it’s explicitly beneficial to ourselves and written into the “DNA” of humanity. Those who rise up and do the most amount of good and set themselves as examples are in fact superhuman. In All-Star Superman, we see a version of Clark Kent who has become as powerful as he has ever been, but has also been given a time limit before he’s killed. Superman then sets out to do as much good, right as many wrongs, and tie up as many loose ends in his life as he possibly can. In doing so he has finally utilized his abilities to their purest use, which is to become an ideal for all of humanity to aspire to become and thus push them into their next stages of evolution. In addition to all this, All-Star Superman is simply one of the best stories involving the character out there. It’s fun, it’s heartwarming/breaking, and while it does reference a lot of things from Superman’s past, none of it is so integral to the meaning that they can be looked at as mostly window dressing.

Here’s a funny story, Alan Moore once tried to end the world with a magic spell. One part of Alan Moore’s outlook, which is based on hermeticism, is that our perception of things represents our existence. So, if that perception were to drastically change then our existence would as well and the one we left behind would cease to be. Now, Moore’s attempt to instill this newfound understanding of things was actually in his book Jerusalem, but it was here in Promethea that the groundwork was laid. On the surface Promethea is the story of a woman who finds herself possessed by the spirit of a fictional character in her universe and who is prophesied to bring about the end of the world. Below the surface it’s a 32 issue series that utilizes things like the tarot, the tree of life from The Kabbalah, and the Corpus Hermeticum to tell a story of how the world’s understanding of existence has changed and the importance ihat imagination has. Now, this may all sound like very lofty goals, it should be noted that there is some solid and enjoyable comic book reading here along the way that can very easily be enjoyed without a lot of the philosophy and mysticism.

How do you feel about these recommendations? Do you have any suggestions of your own? Let us know in the comments section below.