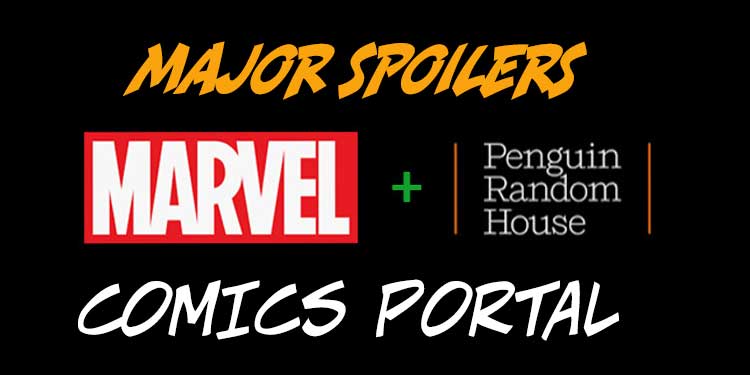 COMICS PORTAL: Marvel and Penguin, Sittin’ in a Tree… While all the details have yet to be sorted out, there are a couple of important paragraphs from the press release. Here’s the first:

Penguin Random House is a free-freight company, allowing retailers to simplify their business models while alleviating the volatility and complexity of reducing freight costs and planning. Through many of PRH’s standard offerings, like its rapid replenishment program for graphic novels and advanced supply chain, Direct Market retailers will experience more flexibility to manage inventory and stock their stores to best serve their customers.

Now for the sentence that’s caused a lot of the discussion online:

Direct Market retailers can choose to order Marvel products direct from PRH, or alternatively, through Diamond as a wholesaler under terms established by Diamond in the US and the UK.

The interesting thing about all this is that retailers ordering directly through PRH are likely to save on shipping costs. However, stores can still order Marvel Comics through Diamond. Those stores may have to find ways to pass this increased cost on to their customers.

More details will be released soon from Marvel and PRHPS.

There’s been a lot of discussion about what this all means to stores and thus to their customers. Most of the people talking about all this in the last several days seem to fall in two camps.

The first is, “This is no big deal! We’ll just continue doing things like we always have!”

Admittedly, this has been the way many LCS’s have run their shops for years. People want to order things from one distributor, which makes things easier for the people doing the requesting. The thing now is that this may be a more expensive way to operate. We’ve yet to see all the details, but if Diamond is now ordering their Marvel Comics through Penguin, that’s a new layer added to the process. That’s surely going to mean a higher cost—unless Diamond can negotiate a cost low enough that stores don’t mind doing continuing to work with them.

The second group has been saying, “This is the beginning of the end for Diamond! Look for other comics companies to jump ship, and it will mean things will change and change big!”

I have to admit that I’ve long been unhappy with how Diamond has done things. I often hear from store owners that product doesn’t always arrive in the best of shapes (to be kind), and getting replacements takes time, sometimes a lot of time.

That’s just one of my concerns! And I’m not alone in this!

Another big worry is that Diamond hasn’t always had the reputation for paying comics companies what they owe them in a prompt manner. That’s crucial to many of the people producing comics! If Penguin pays more quickly, well, that could make the choice to change where product comes from more interesting, to say the least!

THE CONSTANT OF CHANGE

The thing is that most areas of reality follow the old adage, “the only constant in life is change.”

Granted, until recently, the comics industry has been immune to change. You ordered your books through Diamond, they came to the store, they often were sold, etc., etc.

But the industry has been going through something of an upheaval in the last year or two, much of it brought on by the pandemic. We often can’t do things like we always have in the past.

More and more LCS’s are hanging on by a thread. They simply can’t order more than they KNOW they’ll sell, for example. I have often liked to visit multiple stores because one store is faithful to get me what I want, but the stuff I want to look at but am unsure about, well, that’s something I might need to look elsewhere for.

I’ve been talking with several folks on different levels in the industry, from company heads to store owners to customers. One subject they’re all interested in is, will Marvel’s agreement with Penguin help stores save enough money so they can keep afloat? If you can get your product at a lower cost, it could make a difference—especially if you have a lot of Marvel customers!

Of course, as I mentioned, we don’t know all the details yet. As those facts come out in the weeks and months ahead, we could see the industry begin to “evolve,” and change quickly.

Yes, a LOT of stores have been trying to “keep it simple” by ordering from one distributor—Diamond—for years. If Penguin’s ability to save stores money makes change worth it, we could see a lot of movement, from comics producers selling their stuff through several distributors, including Lunar, to stores having to engage more companies in order to get the best deals possible.

Perhaps customers in some stores won’t see much difference in how they get their comics. But behind the scenes, LCS’s  might have to make big changes to keep their doors open and their customers supplied with their comics!

We might be witnessing the evolution some have expected would happen for a long time! Change could be on the horizon! Just what that means is something we’re not sure about right now! Really!

All we do at this point is, stay tuned! Yes, some store owners have already opened accounts with Penguin, but just how things shake out will make all the difference.

What do you think? Will the comics industry be evolving? Will other companies join Marvel at Penguin? What do you think SHOULD happen when it comes to distributing comics? Please be sure to share your thoughts below!