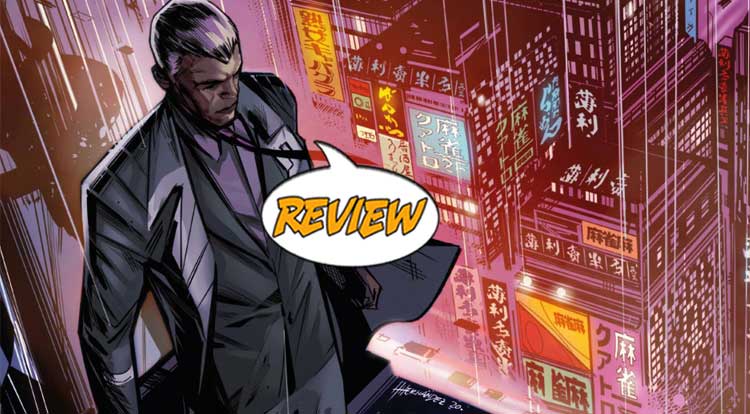 Previously in Blade Runner: Origins:  A Tyrell Corporation scientist is DEAD, the victim of an apparent suicide.  But when LAPD Detective Cal Moreaux is called in to investigate, he uncovers secret documents revealing a new kind of replicant and a conspiracy that could change the world.

We open ten years before Rick Deckard was sent to bring in a batch of Nexus 6 replicants, but the opening shot is a man on the rooftop in the rain, very much reminiscent of the climax of the 1982 film.  We switch perspectives to follow Detective Moreaux, who was attacked by a replicant last issue, as he brings his witness back to police headquarters for questioning.  He leaves the man in the station and briefly goes to look at the body of Lydia Kine, only to find that his witness (her brother) has disappeared into the clutches of the Tyrell Corporation.  Unfortunately, this also puts him square in the sights of a replicant who causes their flying car to crash.  While Moreaux interviews the late Dr. Kine’s co-worker, Marcus Kine is pulled from the wreckage by a replicant.  But is it the one who killed his sister?

My first instinct with this issue is to commend the creators for so successfully capturing the energy of ‘Blade Runner’, as they have perfectly encapsulated the architecture, tone and lighting of the film, and the story and dialogue feels very much in line with Decakrd’s adventure, still in their relative future.  The downside for me, having watched the movie literally last night, that fealty is also its greatest weakness, as this story is almost TOO close to what we saw in the movie.  Moreaux even has some of the same dyspeptic tendencies as Deckard, and his interview with Effie very much reminds me of the Sean Young moments of the original.  The well-done art helps to overcome that possible weakness, though, making what seem like sensible extrapolations of the city of 2009.  The design of the flying limousine in which Tyrell spirits away Marcus is perfectly in-line with the tech of the movie, and the moment where the replicant (who is, as far as I can tell, still unnamed) are excellent examples of an action sequence.

In short, Blade Runner: Origins #2 is the kind of comic a superfan of the film will love, keeping much of the material that makes Blade Runner so memorable, with a few variations and an excellent art job to add freshness, earning 3.5 out of 5 stars overall.  This comic book isn’t necessarily the place to start your Blade Runner experience, but if you’re already a fan (or you read issue #1), it makes for a lovely extension of that world.  I can even see myself coming back to find out what’s hiding beneath the surface of the story, because you’d have to be blind not to realize that something is.

Detective Moreaux' journey through the underworlds of 2009 feels VERY familiar, especially since I recently watched the original film, but it's not a bad book at all.