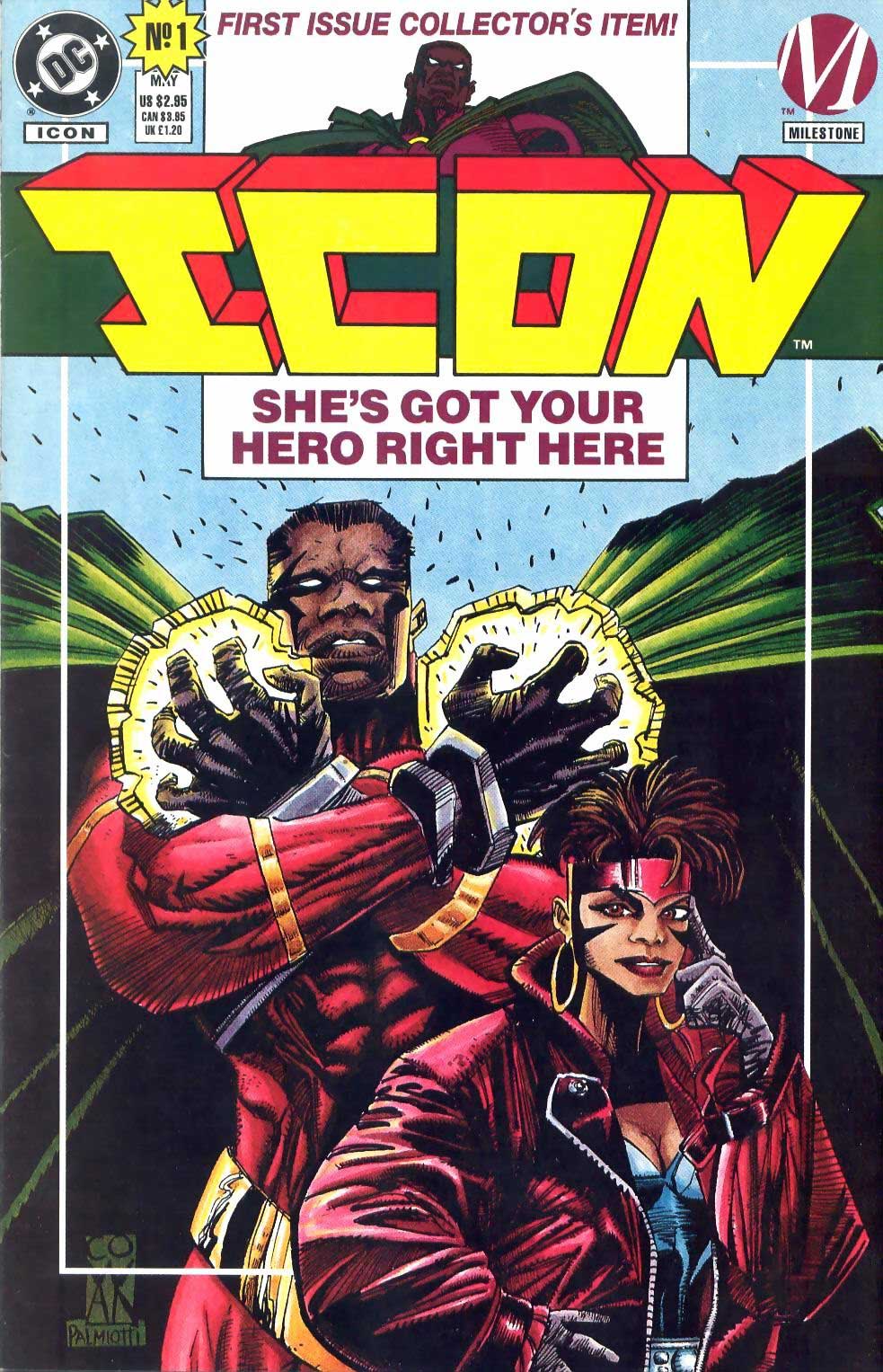 With the return of Milestone upon us, we look back to the first time Icon and Rocket took to the skies!  Your Major Spoilers (Retro) Review of Icon #1 awaits!

Previously in Icon: Back in 1993, the comic industry had been locked in a “Big Two” mode for almost a decade, after the collapse of companies like Harvey, Charlton and Gold Key in the early ’80s.  The new decade brought with it a number of new imprints, including Malibu’s Ultraverse and the sorta/kinda shared universe of Image Comics, but Milestone was intentionally designed to be something different.  Founded by a group of African-American creators, Milestone’s “Dakotaverse” (named for the primary setting, the city of Dakota) centered Black and POC heroes, with DC Comics handling the distribution of their titles.  Our story begins in space, in the terrestrial year 1839, as an alien ship is ambushed by unknown creatures.  The last survivor is rocketed to the nearest habitable world, crash-landing in a cotton field.  When the ship is discovered, it scans the DNA of the human that found it, reconfiguring it’s passenger to duplicate her genetic makeup. A hundred-and-fifty years later, we find that child/alien, now grown to become a successful lawyer, ruminating over a pair of shackles that he once wore.  He is Augustus Freeman IV, and he is wondering if he shouldn’t be doing more for the world after an encounter with a very angry young woman.  The story then flashes back to meet Raquel Ervin and her erstwhile boyfriend Noble, who are about to make a very bad decision. The storytelling here is first-rate, showing us a complex series of different perspectives, all accompanied by the art of Mark “MD” Bright.  Better still, this issue, like all the Milestone books of the era, eschews the limited coloring of Bronze Age Marvel and DC for a more complex palette that makes it all feel more realistic.  As Noble and Raquel and their friends break into the mansion, Augustus Freeman hears the noise and intervenes.  Noble pulls his gun and fires into the rich lawyer’s chest…

…and then Freeman sits up and intones, “This has gong QUITE far enough!” Raquel watches in awe as Freeman flies after them, grabbing each member of the gang and informing them that he’s going to let them go, but that they should make sure to act like “citizens” and not criminals.  That sort of behavior, he reminds them, reflects poorly on their people.  A few days later, Augustus is surprised to find that he has a return visitor… And she has ideas. Raquel storms out, but a few days later, Augustus arrives with a costume for her and one for himself, agreeing that perhaps he has been away from the concerns of the common people, wondering if his conservative principles aren’t based on a lie.  For the first time, he really takes stock of the state of his city, and the hopeless lives of the people, and now he’s ready to help.

Sadly, nobody warned the Dakota PD. As the issue ends, Icon and Rocket find themselves held at gunpoint by an entire squad of armed and armored police, getting right to the point and making for a moment that feels remarkably prescient…  or maybe things just haven’t changed that much in thirty years.  Either way, Icon #1 is a note-perfect debut, giving us both the realistic perspective of conservative Augustus and the progressive hopes of young Raquel, balancing each and the need for superhero costumes and drama perfectly, earning 5 out 5 stars overall.  The first round of MIlestone titles are all good debut issues, but this is my favorite of the lot, even with my deep affection for Blood Syndicate.  McDuffie, Bright and company have created a primer of how to launch your shared universe and set up for the longest-running and most successful of the Milestone titles, and made it look easy.

This book is one of the best examples of talented creators starting their series with a bang, nailing tone, premise, characters, art and story with a degree of expertise that is admirable. It was amazing in 1993, and it's amazing in 2021.

If you see a copy cheap, now's the time to scoop it up.