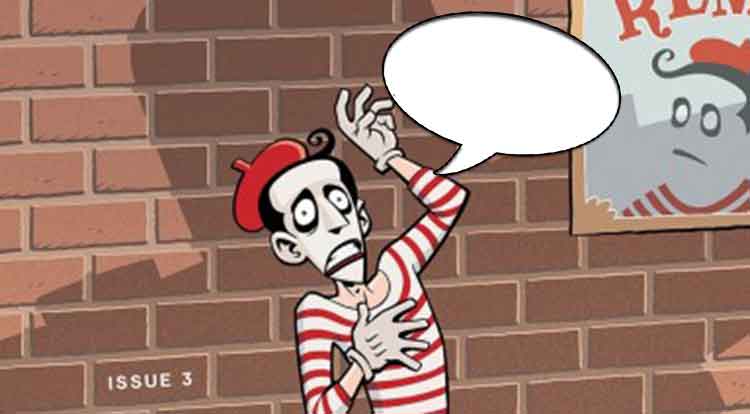 In HAHA #3 from Image Comics, Remi the mime is down in the dumps. Short on rent, short on an audience, he finds a robot companion who puts a smile on his dial. But can this silent friendship go the distance? Find out in your next mighty Major Spoilers review!

Previously in HAHA: W Maxwell Prince turns his glowering eye to the world of laughter, whether they be jester, clown or mime. In each, he finds the humorous, the scary, the sad and the outright outrageous as he examines characters in search of an audience, and understanding.

IF A COMIC FELL IN THE WOODS, WOULD ANYONE HEAR IT?

It is no surprise that writer W. Maxwell Prince would turn his attention to the mime in HAHA #3. Long vilified and treated as the butt of jokes, the mime holds a special place in the canon of clowns. Silent but deadly, the master of bodily control, the mime illuminates the world through exaggerated movement, all while being as quiet as the grave.

There’s a BBC comedy series from the 1970s, The Goodies, which concentrates its humor in one episode titled Daylight Robbery on the Orient Express, where the robbers are mimes, and their crimes are fiendishly clever, and silent. Reading HAHA #3 reminded me of the inherent comedy value of this variety of silent clown.

Of course, our hero Remi finds himself in straitened circumstances. Street audiences are thin, and his finances thinner still. Through a series of events, Remi finds himself scrounging for copper in a garbage dump to earn some coin, when instead he comes across a delightful robot (look, go with me on this one, okay?) named Unit 75. The two hit it off, and Remi has a brilliant idea. Soon enough, the duo are wowing the audiences, and the cash is rolling in – but Remi remains true to himself, donating a coin to a little waif in her hour of need. But when the real owners of Unit 75 soon come calling and Remi finds himself once again alone in the world. But will our hero remain silent in the face of an uncaring universe. Yes (but no!).

It’s hard enough coming up with a story and dialog, triply so when for 99% of the issue, HAHA #3 is largely mute. Prince knows his craft, however, and the reader is never in any real doubt as to what is happening or the course of the plot (except…) Illustrator Roger Langridge does fantastic work with the brief he is given, making clever use in the first pages with Remi’s attempts to break out of the panels on that page. He brings a more cartoony vibe to this issue that perfectly meshes with the world that Prince has created. Prince even has time to reference a famous Merrie Melodies cartoon, ‘One Froggy Evening.’ Overall, in HAHA #3, there’s humor, but pathos as well, and the ending…

Yes, the ending. Prince’s work on ICE CREAM MAN gives you an indication of the dark roads he’s happy to venture down with his writing. While HAHA #3 is nowhere near as bleak as anything ICE CREAM MAN dishes up, the ending is…pretty sad. Remi’s life is down, then it is up, then it is all taken away from him. Even the little waif finding Remi’s red beret and seemingly taking up his craft isn’t enough to remove the lump in the throat that will form for you, dear reader.

BOTTOM LINE: TEARS OF A MIME

HAHA #3 is an excellent comic that features great storytelling and meshes it with an illustrator at the top of his game. While Prince is largely silent throughout the issue, his ability to craft a largely silent story with impact and heft and almost no words is dazzling to witness. Landridge brings his ‘A’ game as well, filling in the empty spaces with heart and expression.

An interesting experiment in ‘silent’ comics, HAHA #3 remains true to its vision all the way to the ending. SIt is sad, and a little wry, and while it may leave you feeling blue, there’s a lot of heart and humor on display as well.