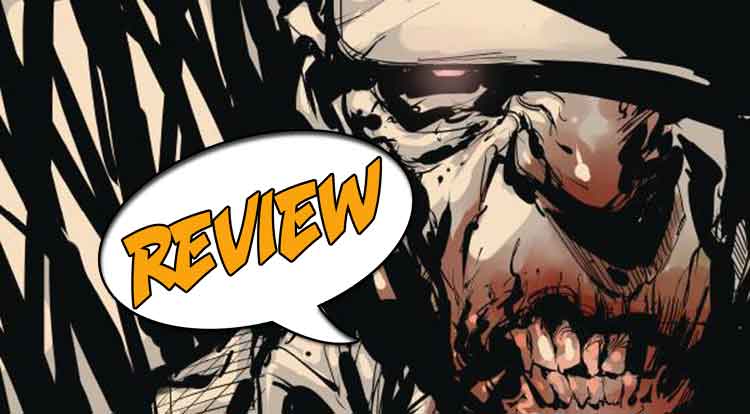 The evening started out with a simple dinner date, but it ended with the collapse of society.  Your Major Spoilers review of Rabid World #1 from Scout Comics, awaits! Previously in Rabid World: When an outbreak of a rabies-like virus devastates the world, it’s a fight for survival in a world gone mad. Two couples set off on disparate courses, one for survival and one to save the world.

Rabid World #1 opens on a farm.  The owner notices his dog scratching at something on the ground and goes to investigate.  There he finds a weird substance on his hands.  Things then shift to Dr. Oster who’s working in a lab sequencing Ebola strains. He receives a call reminding him of a dinner date he has scheduled that night.  Back on the farm, the farmer is arguing with the DNR.  His dog is now sick and he decides to take it to the vet.  Along the way it goes feral and attacks him. He manages to escape the dog, who in turn gets hit by a car.  Things then transition to Mike Anderson, friend of Dr. Oster.  He and a couple of his neighbors are trying to catch some fish for dinner that night. Elsewhere, cases of an unknown disease are popping up across the country and the facilities are under instruction to quarantine everyone. At the dinner party Dr. Oster, his wife, Mike and Kerry Anderson get together for dinner.  Afterwards on the drive home Dr. Oster gets a call, things have gone from bad to worse and he’s ordered to join up with some military personnel to be escorted to a secret location.  Back at their house, Mike, Kerry and their neighbors get a firsthand look at what has the military scared.

To put it out bluntly, if you’ve seen any zombie movie, you’ve pretty much know how this issue plays out. There’s some early hints at what’s coming, then some bigger hints (in this particular case, this is done with a ham-fisted conversation about various “zombies” in nature), then its zombie outbreak time.  What makes this somewhat worse than that though is how closely it borrows from other zombie properties.  The explanation for the zombies in this one is almost identical to 28 Days Later and the story of a doctor being recruited by the military resembles the World War Z movie. Almost every notable scene in this comic feels like it was pulled from some other comic or movie.

While the story leaves a lot to be desired, the art is enjoyable, with some flaws.  Like the plot, the art here does seem copied from other works but in a more competent way.  Opting for a mostly black and white palette a la The Walking Dead with splashes of color as seen in Sin City, the book is nice to look at and does a good job depicting the ferociousness of this brand of zombies.  Also, credit should be given for the fact that while there is a decent amount of gore and blood here, it doesn’t come off as gratuitous or unnecessary.

Rabid World #1 is not a great comic book.  Even amongst other zombie comics it isn’t up to snuff.  This is mostly due to its lack of originality.  Every aspect of the story feels like it comes from a zombie movie Mad-lib. Also, while the art is nice to look at and helps tell the story competently, it too is derivative of other works. 2 out of 5 stars.

Rabid World #1 is not a great comic book.