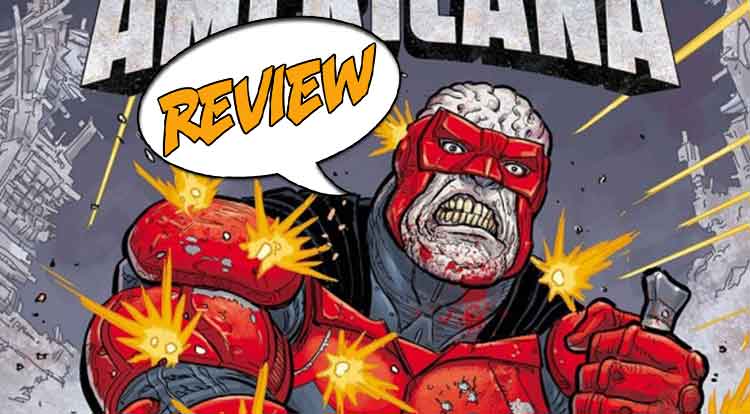 In Post Americana #4 from Image Comics, Carolyn and her mother finally reunite in a bloody firefight you have to see to believe! But with Hawkesworthe on the rampage, can the insurgents find a way to lead America to a bright new future? Find out in your next mighty Major Spoilers review! Previously in Post Americana: The Bubble was established to house the executive branch and their filthy rich cronies. Only, when the hammer came down, it was the filthy rich who reached it, while the executive branch crashed and burned. Now, with the resources of this redoubt, President Hawkesworthe intends to master the mutants and freaks populating the wastelands of America, and bring a new and shiny and ever so slightly fascistic dawn…

About as subtle as a smack in the face with a meat cleaver, Post Americana #4 wears its heart on its sleeve. There’s no denying it is an extended screed against the elites running the country, fattening themselves on the profits made from the sweat of the many, while everyone else scrounges for tidbits in the ruin of America. No one is getting $15 minimum an hour, that’s for sure!

Characterized by some surprising hyper violence, and a need to expose the failings of the American capitalist model to all and sundry, Post Americana #4 doesn’t stint in laying it on thick for the audience. Writer Steve Skroce knows who his targets are, and doesn’t miss.

There’s a lot to like about Post Americana #4, especially the artwork. Skroce pulls double duty on this issue, providing the script and the art. Of the two, the artwork is the more enjoyable. There’s always something to see in his intricately filled panels. The detritus of the fallen America is everywhere, testament to the wanton waste and consumerism that reached a peak before the fall. One of my favorite characters Skroce has created is the mother of President Hawkseworthe. Mummy dearest is a withered old crone, with the devil in her eye and a smile that would kill native wildlife at ten paces. Every crease and furrow and line in her face is lovingly rendered, and you can almost sense the stink of mothballs rolling off her scrawny frame.

Whether it is cities filled with collapsing skyscrapers, or his fastidious attention to detail in depicting the decapitation and dismemberment of characters by Carolyn during the numerous action scenes, Skroce puts his heart and soul into Post Americana #4s imagery.

I think where Post Americana #4 falls down a little is the story itself. I’m not saying it’s bad, but there is an air of the predictable here. While the wilds of America are a violent, dangerous place, it never feels like our lead characters – Carolyn and Michael – will suffer the awful fate so many of the people they encounter do. While heads explode and limbs fly through the air, there’s a certain inevitability that the lead characters will survive to win through to the final issue. It means that while there is a lot going on, there’s not as much tension as the situation they find themselves deserves. Obviously, there’s no story without at least Carolyn, but I would’ve liked to have been higher stakes for her. There’s a scene where Carolyn and her companions have been captured and are about to be summarily executed. The sudden appearance of an outlandish figure in red (he’s on the front cover) dissipates one of the rare moments of tension in Post Americana #4.

That said, Post Americana #4 is strongest when it moves away from Carolyn’s travails, and back to the Bubble, where Hawksworthe holds sway over a restive populace. For all the rapturous applause he gets with every pronouncement, it is clear that the people who actually keep the Bubble ticking along are straining to break free. For all the talk of democracy and freedoms, Hawkesworthe’s doublespeak masks a relentless desire to crush the liberties of all those around him. That is where the beating heart of Post Americana #4 lies, and I look forward to seeing more of it in the remaining issues.

BOTTOM LINE: SATIRE SO THICK YOU COULD CARVE IT!

In our post you-know-who world, Post Americana #4 is a not so gentle reminder of a contentious era that is barely in the rear view mirror. While its post apocalyptic setting is an exaggerated version of our own world, it still provides a pointed commentary on what an unrestrained, amoral, power crazed leadership could do if allowed to assume power. For all its genre trappings, Post Americana #4 is a cautionary warning to all who read it.

83%
83%
Exaggerated Version of Our Own World

A happy reunion amidst the bloody body parts of the bad guys reinforces Post Americanas no holds barred attitude to the world it is depicting. Come for the end of civilization, and stay for the double act of Hawksworthe and his mother!