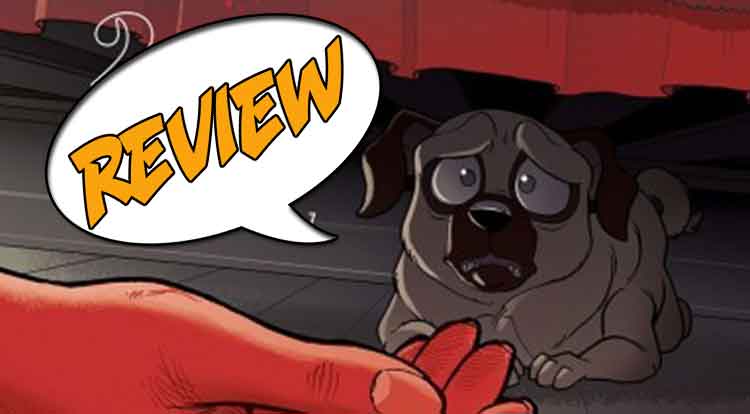 Sophie is sure her Lady was killed. Are the dogs living with a killer? Find out in Stray Dogs #2 from Image Comics!

Previously in Stray Dogs: Sophie finds herself living in a large house with a lot of other dogs, but she doesn’t remember how she got there. Things don’t seem quite right to her, but she tries to fit in. Until one day, she smells something familiar and suddenly remembers. But when she tells the other dog that their Master killed her Lady and then brought her here, she is met with skepticism. But one dog, Rusty, hears something in her voice and is willing to help her.

Stray Dogs #2 opens that night when all the other dogs are sleeping and Rusty has told Sophie that he believes her. Strangely, after her startling revelation, Sophie no longer remembers what he is talking about. Rusty barks and scratches at the door, waking the man as well as the other dogs. As everyone starts getting up, Rusty slips out, finds the red scarf, and brings it back to the room. One sniff, and Sophie’s memory of her Lady’s murder comes back.

As the dogs eat breakfast, Sophie asks Rusty about the “Private Room,” the one the dogs are not allowed in. He doesn’t know what is in there – possibly treats? (Seems like something dogs would find important!) After breakfast, the man takes Aldo with him on a ride. Sophie wants to get into the room. Rusty tells her it is always locked. Well, it was always locked, until today. They go into a room with an odd mix of stuff – women’s clothes, photographs, tools, and rope. To Sophie, it all feels wrong. To Rusty, it seems like a bunch of junk. And besides, the Master cares for them and protects them.

Sophie keeps looking, time passes, and suddenly the Master comes home. He only sees Rusty, calls him a bad dog, and kicks him (literally) out of the room. Sophie, terrified, runs into a closet where she overhears the man talking to himself, saying things like, “Who is this little guy? This is Earl…” (naming one of the dogs.) We know he’s practicing something. We know Sophie probably doesn’t understand this. And then a box tips over in the closet where Sophie is hiding.

Sophie has a brief flashback to a day at the dog park – the day when she ran into the Master. As he is just about to open the closet door, there is a noise from downstairs. He goes downstairs and takes Rusty outside to a shed. Sophie scampers free and asks the other dogs what’s happening. “Punishment,” the explain. Rusty is in the shed until nighttime. Earl accuses this of being Sophie’s fault, but one of the other dogs, Killer, asks him what happened. He has no memory of what happened today.

THE DOGS’ VIEW OF THE WORLD

One of the things I enjoy about the art in Stray Dogs #2 is that great care is made to have much of the point of view from the dogs. Often, we see the Master’s lower half, for example. But it is really apparent when Rusty and Sophie explore the Private Room. We immediately see all the women’s clothes hanging up, and after a couple seconds we take in the rope, the bolt cutters, the handcuffs. The two dogs just look mystified, as though these are all mysterious human things to them. It adds to the chill factor of the story because it’s becoming clear to us that this man probably is a serial killer, and these sweet dogs don’t have a clue.

I love the expression in the dogs. Like animated canines, their faces and especially the eyes are very human. But the body language looks more like that of dogs. When Sophie gets locked in the Private Room, hiding from the Master, we see her fear escalate into terror. It is so easy to identify with these dogs and to fear for them. I was grateful that any punishment Rusty got beyond being locked in the shed for the day was off panel. I love dogs, and I am worried enough about these guys already.

The suspense is high in Stray Dogs #2 as we wonder how a group of dogs is going to deal with this mystery. And then this is a book that manages to take one of our dogs’ most beloved places, the dog park, and turn it into something creepy and sinister. I never thought that would be possible.

Rusty risks punishment so Sophie can look around…for what, she doesn’t really know.