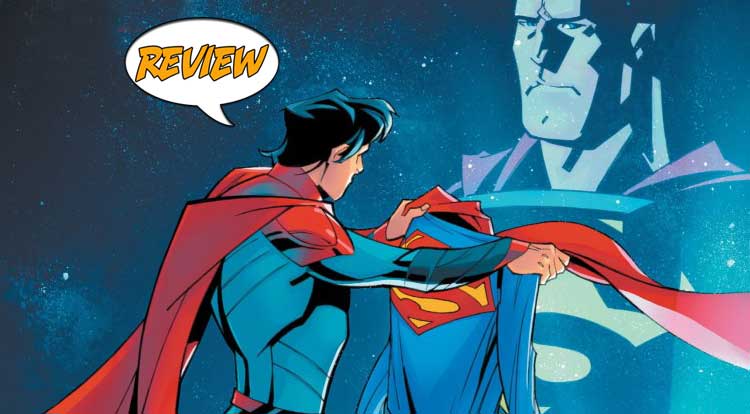 As Superman falters, Superboy must become the hero he is destined to be.  Your Major Spoilers review of Action Comics #1029 from DC Comics awaits!

Previously in Action Comics:  Following an almost-deadly attack by an alien foe, the new Superman realizes that any threat could be the one!  Neither Superboy nor Superman know what’s behind this latest attack. Two words: the Wall.

A DAY THEY WRITE OF FOR CENTURIES

In orbit around the Earth, Superman and Superboy engage a horde of strange, alien creatures whose talons are a match even for their Kryptonian hides.  Superman takes some serous damage, while the slightly smaller target that is Jon/Superboy evades attack, leaving them deal with the orbiting crew of a human singularity cannon, a device which might have actually opened the portal for the aliens.  Jon realizes that his dad is really badly hurt, and finally tells Superman the truth: This is the day he’s been dreading, a day that he’s heard about in the future…  The beginning of the end of Superman.  As the Super-Family engages the next wave of aliens, Superman intends to close the portal, which would trap him on the other side and fulfill the prophecy of Superman’s demise.  What the future didn’t count on was Superboy, who not only saves his father’s bacon, but is fast enough to close the portal and make his way back through, leaving them to deal with the fallout.

And somewhere in the universe, Mongul approaches.  There’s also a short backup story of The Midnighter, who has somehow gotten a new computer in his brain… one that has it’s own thoughts on what they should and shouldn’t be doing.

When I started reading this issue, I felt like I needed to go back and see where the last one left off, but in so doing, I remembered that Action Comics has been on hiatus for the ‘Future State’ event, and that where we left off has nothing to do with this.  The first half of this story feels like we’re rushing, as the aliens, the orbiting satellite (apparently under the auspices of Amanda Waller) and the sudden realization that Jon thinks his dad is dying all get introduced in the space of a few pages, and by the time we realize that Superboy is changing the prophecy, it’s all over.  I’m definitely going to come back and see where this issue is leading, though, thanks mostly to the art of Phil Hester.  His Superman feels classic, but also has enough gravitas/age to make it feel like his dying is a literal possibility.  The alien designs are likewise terrifying enough that you truly believe that they could harm the Man of Steel.  Best of all, though, is Hester’s Superboy, who stars in a couple of truly triumphant splash pages that make me wonder if the Future State isn’t coming sooner, rather than later.  Likewise, Michael Avon Oeming’s art in the Midnighter story is strong and clear, though I have no real idea what’s going on or why he seems to have come back from the future.  I’m not even clear who his computer brain is supposed to be, though the story seems to assume that I do.

BOTTOM LINE: GREAT ART, THE MAKINGS OF AN ENGAGING STORY

Even with the feeling that we’re joining a story already in progress, Action Comics #1029 is a pretty good book, with excellent art and design combined with a story that centers Superboy in an interesting way, and hopefully won’t lead us to the possible evil Jon future DC has been hinting at, all together earning 4 out of 5 stars overall.  If nothing else, you’ll enjoy the father/son Kryptonian team fighting and hanging out together and sharing stories of Grampa Jonathan.

This issue feels a bit rushed, but the quiet conversation between father and son really helps to pull it all together.