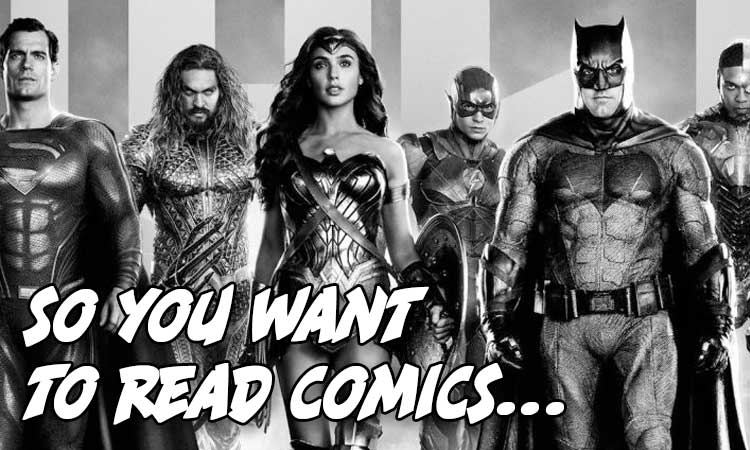 So You Want To Read Comics: The Snyder Cut Edition

It’s that time, it’s time for “So You Want To Read Comics”, our weekly feature where we take a look at a single topic and then offer up comic book recommendations for new comic readers based on that topic.  This week we’re, of course, looking at The Snyder Cut of Justice League.

In case you weren’t aware there’s been this thing called The Snyder Cut.  Basically a lot of people didn’t like the theatrical version of Justice League, so they demanded that someone release the director’s cut of the film that was rumored to be much better.  Well, they released it and it has once again created a lot of discourse online, just like the campaign that brought it into existence.  What isn’t up for debate though is that Zack Snyder definitely pulled from some storied comic series to influence his movie, and those influences deserve some recognition.

As a quick note, neither of these I would consider great for new readers but there’s just no denying their impact on the film so go in knowing you might not have the whole story here.

In terms of important names in the comic book industry there are only a small few  that are as important as Jack Kirby’s.  Being instrumental in the creation of The X-Men, The Incredible Hulk, and so many others, Jack Kirby truly needs no introduction. In the mid-70s though, being unsatisfied with his position at Marvel Comics, Jack Kirby jumped to DC comics and it’s there that he would create his most ambitious creation The Fourth World.  The Fourth World is a revolutionary  collection of various titles that come together to create a new sci-fi themed mythology featuring the epic and abstract endeavors of godlike beings.  One of these series was New Gods.  It’s in this title that characters like Orion and Desaad are introduced, concepts like The Anti-Life Equation and Motherbox come into being  and a little known character as  Darkseid makes their first appearance.  If you have seen The Snyder Cut, you should already see how this series made this movie possible.

So, here’s a little secret.  I don’t really like this comic book.  But, even I can’t deny that The Batman that we see here in Justice League and other DC movies made by Zack Snyder is heavily influenced by this depiction of the Caped Crusader. Written by Frank Miller, this comic  features a version of Batman that is past his prime, this comic book broaches questions like “Does the world need heroes?”  “What happens when a superhero becomes a pawn of the government?”  “Can a hero become so obsessed with their version of justice that they become the bad guy?”.  Perhaps most well known for the conflict with Superman that appears in this story, there are elements throughout that will seem familiar to anyone who was paying extra attention to The Snyder Cut, even right down to the version of Batman’s costume seen here in the movie. Basically if you like Batman in this movie and the one that came beforehand, Batman V Superman, this is the Batman story for you.

So there you have it.  Did you like these recommendations? Do you have some of your own?  Let us know in the comments section below.