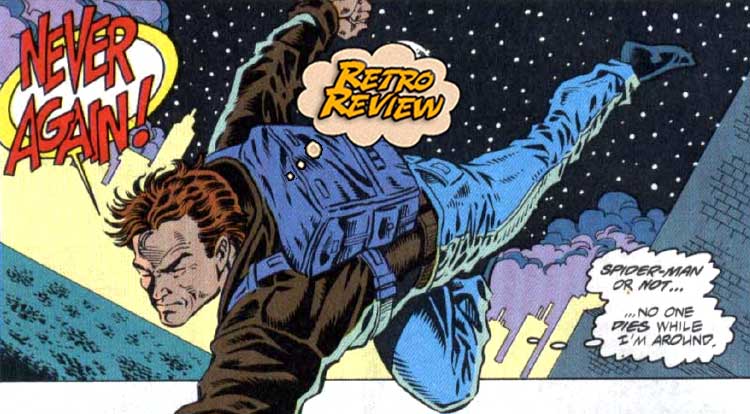 This is a tale of two Spider-Men.  Your Major Spoilers (Retro) Review of Web of Spider-Man #118 awaits!

Previously in Web of Spider-Man:  (This one’s for Jawiin, the number one Scarlet Spider fan.)  For years, Peter Parker believed that the clone his college science teacher made of him had died, and that his/its body was cremated in the smokestack of a power planet.  That is not the case.  “The Clone” got away alive, living a hidden life and traveling across the country, calling himself Ben Reilly and generally living a rough-and-tumble life on the road.  Now, after several years, Ben has returned to New York to settle some old business, much to the chagrin of his other self. After years on the road, Ben doesn’t have a lot of ties in the city, and the ones he does have belong to Peter, so he hangs out in the Natural History Museum, among the spider exhibits, admiring the various eight-legged freaks there and monologuing about his own nature as a clone.  At first, I thought this issue was a Mark Bagley joint, but it’s Steven Butler, who provides an equally kinetic take on spider-powers and leaping across the rooftops of NYC. With Aunt May in the hospital and Peter MIA, appearing one of the THREE other monthly Spider-titles of 1994, Ben remembers the lessons imparted by Uncle Ben, even if he thinks they’re second-hand, and worries about the twin threats of Venom and Carnage, currently warring across the city.  He visits the warehouse where his career officially began, then the top of the Brooklyn Bridge where Gwen Stacy died, only to find a woman trying to jump.  Ben saves her with a perfectly timed save, one he’s imagined for years after the tragedy of Gwen, and realizes that, whether he wants it or not, he has power.  And with great power, yadda yadda yadda… Realizing that he can’t be Spider-Man anymore, but he can’t remain inactive any longer, Ban quickly makes a shopping trip, then returns to his hotel room to address the symbiote problem once and for all. With the help of a Museum hoodie, because foreshadowing is your key to quality literature, the man once known as Peter Parker take to the rooftops once more to honor the legacy of his lost Uncle Ben and protect the innocent. Things get complicated after this decision, as Aunt May is dying, Mary Jane is pregnant, and Peter is hoping to finally put his costume in the garbage can for real, now that Ben has arrived to uphold the honor of the spiders.  Web of Spider-Man #118 is a well-done issue in both art and story, and Kavanagh’s use of important Spider-Man moments to relaunch Ben’s career is paralleled by impressive art from Butler and Emberlin, earning 3.5 out of 5 stars overall.  it’s a reminder that, even with something as poorly received and remembered as The Clone Saga, there are pearls to be found among the metaphorical clone oysters.

Strong art and a well-done story make the inaugural outing of the as-yet-unnamed Scarlet Spider surprising, even with the shadow of the Clone Saga on the horizon.