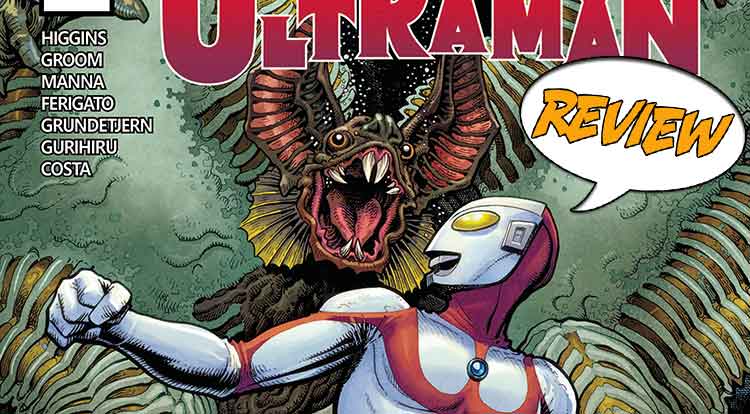 The Trials of Ultraman #1 Review

Kaiju and Ultraman are now the focus of the news. But do superheroics ever work out as planned? Find out in The Trials of Ultraman #1 from Marvel Comics!

THE TRIALS OF ULTRAMAN #1

Previously in The Trials of Ultraman: Shin Hayata merged with the alien being known as Ultra to become Ultraman! Shin can use Ultraman’s superhuman abilities, but only for three minutes at a time. He uses these powers to help protect the Earth from Kaiju. After finding that the United Science Patrol had been imprisoning Kaiju in an interdimensional vault, Shin set them loose, hoping they would focus on him…

THE UNITED SCIENCE PATROL OPENS UP

The Trials of Ultraman #1 opens with a brief discussion of consequences and a lightning history of the United Science Patrol (USP) and their work trying to control Kaiju. This leads into an announcement from Aude Morheim, the executive director of the USP, that she makes on television. The USP is no longer a secret organization.

A group of workers on break see this on the news. Someone swears that a friend of a friend saw Ultraman, but others are skeptical. There is a loud but muffled thud, and they race outside to see Ultraman’s hand burst up from the ocean. For Ultraman is in the ocean fighting a Kaiju and wondering (Shin talks with Ultra) where all the released Kaiju have gone. It’s a good question – Kaiju are not exactly small. They come up with a way to defeat Pestar, but Kiki Fuji radios them – they have damaged a drill pipe which is now leaking. They fix that, but Shin’s three minutes are up.

Back at the USP, there isn’t a moment of rest for Shin Hayata. Director Morheim wants to talk to him. Shin wants to be completely open so they can reassure the world about Ultraman. Morheim points out that he is completely vulnerable when he is not being Ultraman. And she probably wants to hide the whole “three minutes” thing. So while the world knows about the USP, they don’t know all the details about Ultraman.

A month later, the USP and Kaiju continue to be debated on TV with much criticism. It is a harsh realization for Shin that people will persistently be people, and nothing ever is as straightforward as you hope it will. He goes home one evening to find his father following the Ultraman story on TV. His father thinks it is all a stunt and doesn’t believe Ultraman is here to help. Frustrated, Shin admits to being Ultraman. But before his father can really react, he gets a call from Kiki Fuji, and she has some interesting news.

The art of The Trials of Ultraman #1 has a fun balance of realism, the fantastic, and humor. There are a couple of Kaiju fights that may be short, but they have all of the big drama you want to see in such a fight. The foreshortening used helps sell the size of Pestar and Ultraman. It did take me a second to realize that the dialogue in the fight was between Shin and Ultra, but literally only a second. The lettering helped set me straight.

I also like the views of Shin’s normal life. Watching the TV new debates about Ultraman is depressing enough but watching it on a cell phone while waiting for the line in the grocery store to slowly move alone makes it agonizing. Shin looks like he is beginning to doubt himself by the time he gets home. Then to see his father react as though it’s all a big setup and even something amusing is frankly kind of funny although we know what is really going on.

BOTTOM LINE: WHERE HAVE ALL THE KAIJU GONE?

If you like a good Kaiju story, look no further than The Trials of Ultraman #1. Pandora’s box is standing open, and it was full of Kaiju – but where are they all now and what are the up to? That is a premise that will bring me back for the next issue.

Pandora's Box is Full of Kaiju!

The United Science Patrol steps out of the shadows, but still keeps some secrets.