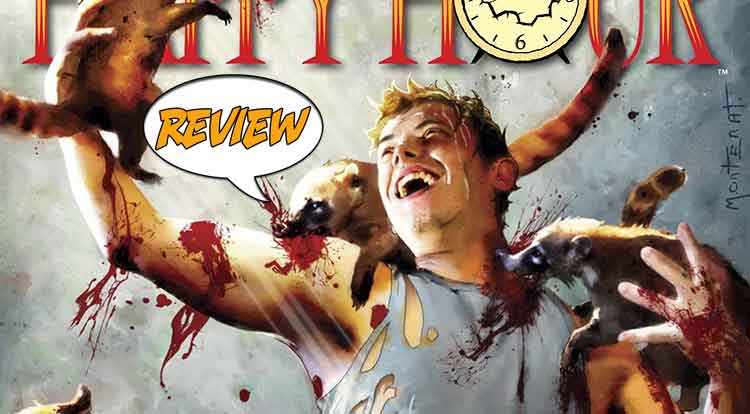 In Happy Hour #5 from AHOY Comics, Jerry and Kim endure savage punishments to eliminate the fake happiness beaten into them.  Meanwhile, Mr Sullivan endures the rigors of the happiness re-education centre. Can a group of pro-unhappy militants save him from happiness?  Find out  in your next mighty Major Spoilers review!

Previously in Happy Hour:  Turn that frown upside down, for America has banned sadness!  While the regime literally beats the happy into you, there are those who seek the depression that is now illegal.  Jerry and Kim are two of these, and flee into the arms of pro-misery militants.  What they find isn’t a nirvana of gloom, but a savage, daily beatings.  And that’s not taking into account the nasty racoons that come out to bite the joy from them…

As subtle as a brick to the face, Happy Hour #5 doesn’t do subtlety.  It’s a lean, mean, threshing machine of a story, telling parallel accounts of an America where happiness is forced upon the population.

Writer Peter Milligan doesn’t spare the reader his full lunatic vision of an America gone awry.  The relentless nature of the regime in forcing happiness onto the population is a warped echo of an aspect of American life that says that if only you worked hard enough, success and happiness are within reach.  That being sad about life is un-American, that sinking into depression is a luxury you can’t afford.  Take that to its logical extreme, and you suddenly have re-education facilities whose sole purpose is to ensure, by any means, that its patients exit in a state of permanent happiness, no matter how brutal the journey to nirvana is.

Inevitably, Milligan has created a counter movement, a rag-tag organisation dedicated to toppling the happiness regime, and returning America to the true path of desperate unhappiness and gloom.  Obviously, their techniques are as equally brutal as their happy counterparts.  Hours of imagery of the ugly side of America, followed by being savaged by coati, who are bred to bite the joy from you.

Obviously, Milligan is making a satirical point, and that obviously we should all try to balance our emotions against themselves, that being too happy, or too sad, or states that only cause pain.  But the frenzy with which he depicts both worlds is often painfully funny and made the more so by Michael Montenat’s art.

Montenat makes great use of fumetti.  Stephen, Rodrigo and Matthew recently talked about this technique at length in a recent episode of Major Spoilers.  I’m not sure I am the greatest fan of it.  Sometimes, the expression on the character’s faces seems off when compared to the pose of their bodies.  There’s a constipated look that comes to mind.  But in service to Happy Hour #5, the technique works a treat.

The baseline to the issue is the violent treatment handed out to the patients of both facilities.  Juxtapose the happy talk from the nurses at Readjustment Center Number 3, with Mr Sullivan’s agony as he is electrocuted, and you can’t but smile.  The faked grin of Mr Jones who confesses to loving his wife as much as he loves blood sausage is as painful to see as it is amusing to read.   Montenat does a very good job of depicting the gleaming shininess of the center masking the rot within.  Similarly, the village at the edge of the swamp across the border in Mexico is the perfect place to drain the fake happiness from Jerry and Kim.  A relentless vista of shades of brown, the treatment they receive is, if anything, more brutal than the center.  Montenat greatest pleasure, it seems, is depicting the attack of the coati on the happy due, hoping to suck the last vestiges of joy from them.

Happy Hour #5 doesn’t bother treading a fine line.  Instead, it repeatedly and gleefully jumps across the line, taking great fun in harpooning the wellness industry.  Happy Hour #5 isn’t subtle, and it won’t be for everyone, but if you came from the laughs (some uncomfortable), then mission accomplished, guys!

A satire as broad as it is shallow, Happy Hour #5 makes its point by bludgeoning its characters as well as the readers. Not for everyone, but nonetheless a fun diversion for those seeking a diversion from the agony of existence.