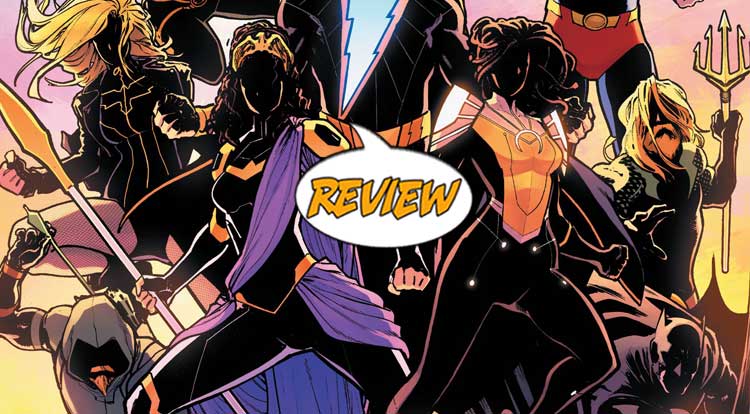 A new world requires a new League…  but what role will Black Adam play?  Your Major Spoilers review of Justice League #59 from DC Comics awaits! Previously in Justice League:  Superman is leading the charge to reinvent the Justice League, and at the same time, a new, cosmic-powered threat arrives from Naomi’s home world to rule the Earth!

Our story opens in Kahndaq, where Black Adam encounters a young man while Adam is visiting his beloved’s grave.  (Said beloved is implicitly Isis, who died before the Flashpoint retcon, but now everything old is new again.)  They have a nice talk, making it clear that Adam’s people don’t see him as the dictator that some do, but their conversation is interrupted by an alien attacker, who exclaims that he’s claiming the entire planet for himself.  Adam shakes the creature up, but before he can finish the battle, Superman and the League (Hawgirl, Aquaman and Batman_ arrive and order him to stand down.  The League’s sheer power shakes him up, but during the battle, Hawkgirl’s mace reacts to something in the alien’s makeup, an element which resembles the powers of Naomi MacDuffie, the newest Bendis creation on the block.  When we cut Naomi, it becomes clear that Adam has also figured it out, as the tale ends with him arriving with something to discuss with Ms. MacDuffie.

BACKUP TALES ARE BACK!

Our backup story features the Justice League Dark members (Jason Blood, John Constantine and Zatanna, among others) dealing with the first rumblings of a return by the legendary Merlin, and it’s a very good first chapter, if a bit short.  Xermanico’s art in the backup tale is as good as Marquez’ in the lead feature, and both of them have a particularly lovely style when it comes to expressions.  Superman’s worried face as he sees Black Adam is balanced out with the eye-rolling of Black Canary and Green Arrow’s slightly smug enjoyment of being proven right, and it’s clear that this take on Black Adam is a full-on face turn, because he’s utterly beautiful in these pages.  Bendis’ script doesn’t feel at all like a first issue to me, but it ends up having the same strengths and weaknesses as his recent Legion reboot: The characters have distinct and interesting voices, but there’s not really a cohesion of story to pull it all together.  Worse still, the breaking point of the first story feels less like a cliffhanger than it should, as it’s an awkward place to pause

In short, Justice League #59 feels like a rebuilding issue, but pulls off a lot of strong character bits (like the team’s discussion of whether they’re actually doing enough and Superman’s brief interaction with Black Adam) but a plot that feels like it’s only halfway there, combined with strong art and an interesting backup story to earn a better-than-average 3.5 out of 5 stars overall.  It’s a well-done palette cleanser to clear the metaphorical decks from Snyder’s extended JL run, but the proof of the pudding will be in the next few issues and whether things actually go anywhere.  I’m at least hoping that it’s more cohesive that Bendis’ Legion run.

It's got a lot of interesting components, but like so many Bendis stories, it sort of circles around the point. Still, this take on Black Adam is new and different, and the backup tale of the JL Dark is nice as well.