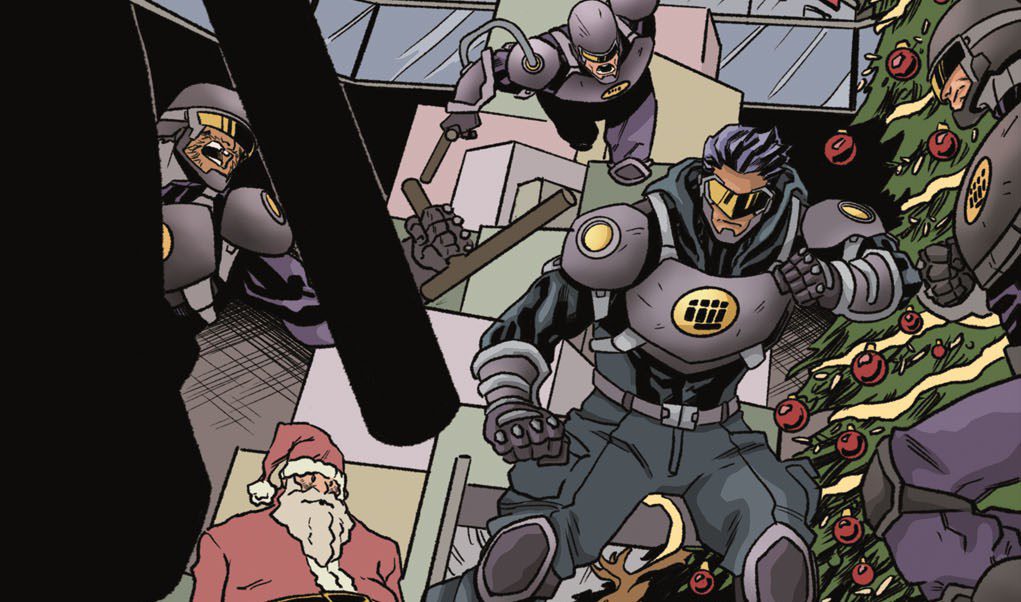 Markosia has announced that Identity Stunt 2 #1 is set to make its return to comic book stores this week.

“I am absolutely thrilled to be playing with these toys again,” said series creator and writer Joe R. Khachadourian. “And I cannot wait for you all to dive back in head-first and witness the bonkers adventure that we have in store for you!”

Khachadourian adds, “The killer new art team and I have been hard at work on this new volume since — literally — just days after wrapping up Volume 1. We’ve kicked up the action and the stakes a few notches, hoping to give you the same break-neck feeling as a gut-punch from Steve James!”

Former stuntman Sami “Sam” Nasser is finally piecing his arduous life back together, having narrowly survived a torturous experience with a psychotic ganglord six months earlier. As promising new opportunities present themselves to the Nasser Family this holiday season, so does an unfamiliar adversary, long-hidden by the shadows of the underworld, and now clawing at the threads of unanswered questions dangling in the back of Sami’s tumultuous mind. Christmastime is here again, Studio City, and it’s brought with it a battalion of ballistic Beatdown doppelgangers, all ready to deliver one sinister message to Sami Nasser: What Father wants…Father gets!

Channeling the eruptive spirit and witticism of ‘80s and ‘90s action movies, writer Joe R. Khachadourian (Transformers: Mosaic, Altered Metal) and artist J.C. Grande (Johnny Monster) bring you the next high-octane chapter of the critically-acclaimed Identity Stunt saga, featuring a multidimensional cast on an intrepid quest for self-discovery, facing the relentless onslaught of an all-new pack of masked lunatics!

This new tale focuses on stuntman and all-around good guy Sami Nasser, just as he’s slapping his shattered life back together following the fallout from our last Identity Stunt outing. Unfortunately, as these things are wont to do, Sami’s plans don’t quite pan out when a mysterious scourge from his past makes their diabolical return, armed and ready to drag Sami, his family, and his city to their knees. Ain’t that a thing, folks?