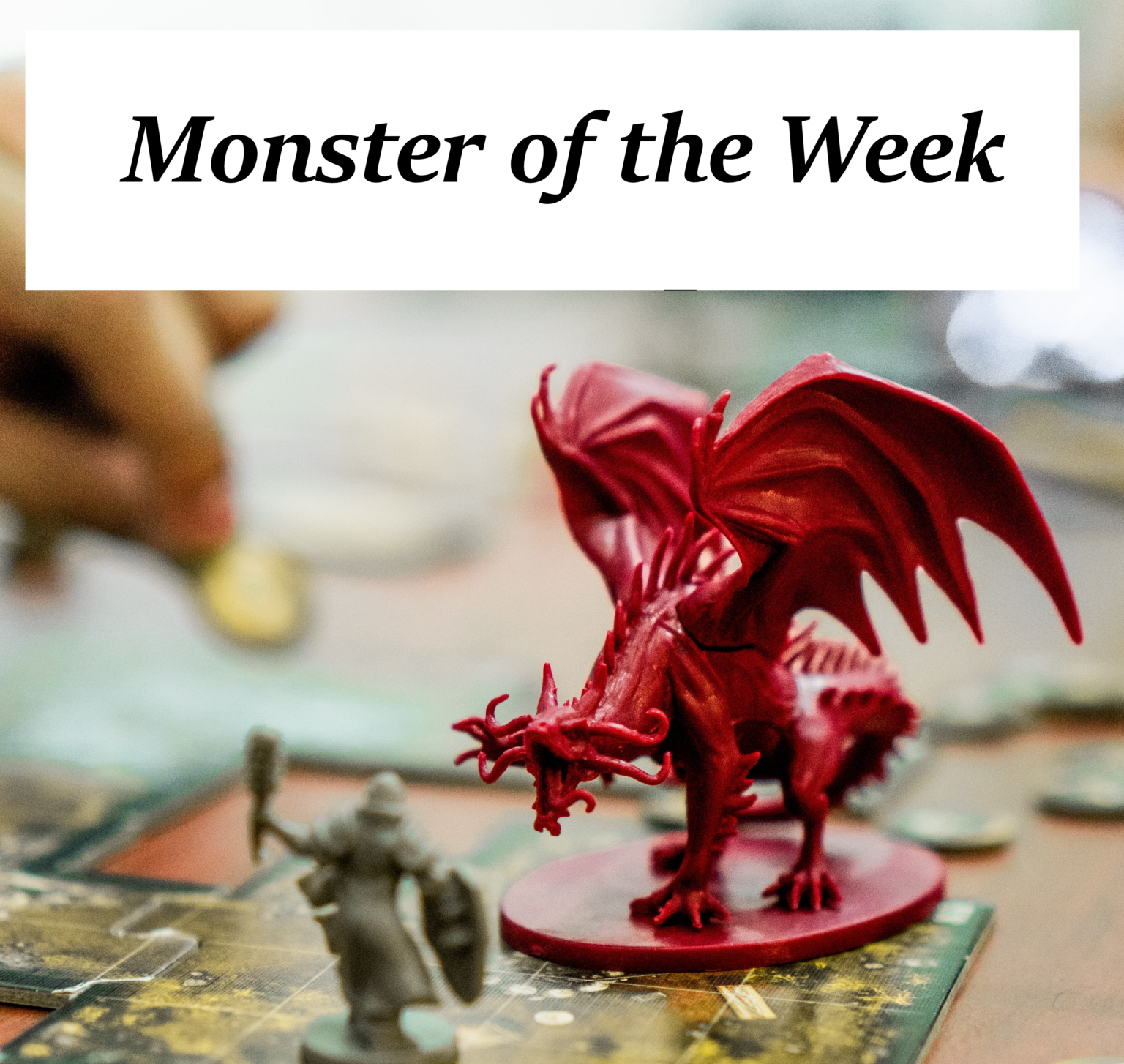 TTRP Corner: Monster of the Week

There are monsters under the bed and around the corner. Are you going to be a hunter who hunts down these creatures or a bystander cowering in fear? This week in TTRP Corner, we are checking out Monster of the Week by Evil Hat Productions.

MONSTER OF THE WEEK 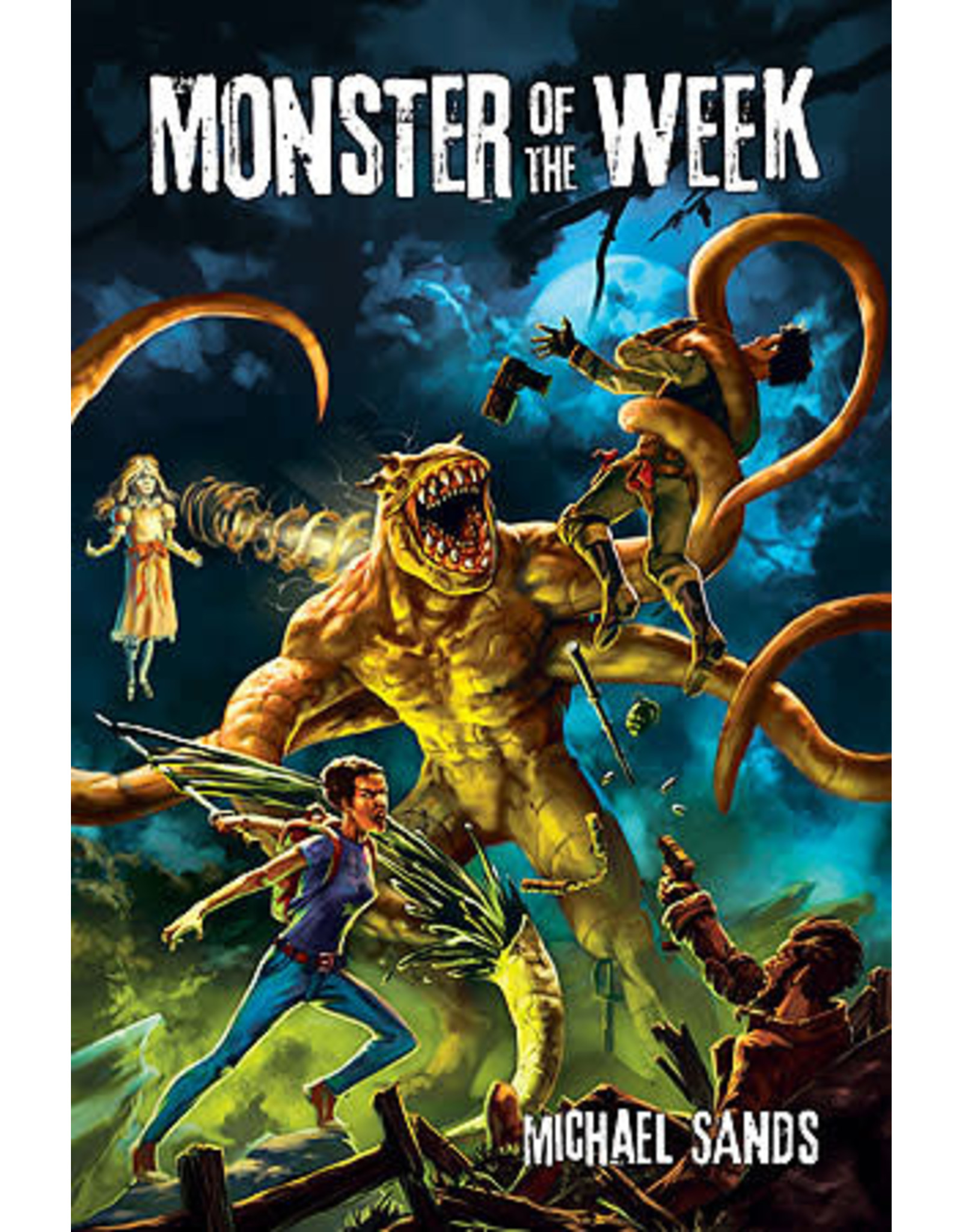 Monster of the Week is based off the popular Apocalypse World System. Apocalypse World uses a simple 2d6 dice set. When you roll your dice, you add the numbers together then apply any bonuses. On a 2-6, you fail and mark experience, a 7-9 is a mix success, and a 10+ is a great success. Eventually you get even more options if you roll on a 12+. You use this mechanic to perform “moves”. Some of the moves are attached to your character playbook and some moves everyone can use. It is particular interesting that advancement is this system is from failure rather than combat or completing objectives. While there are some end of mystery experience, the idea is that through failure you become better and smarter.

Additionally, your character is also part of an archetype. Your character is the representation of what the archetype represents and no one else is. For example, if you pick up a Divine Playbook, you are the representation of that trope. Same with the “Crooked” turn Monster Hunter or the “Professional”. You are one of a kind. Each playbook has a list of things that they specialize in. A Crooked could be a good driver and a Spell-Slinger can use special magic effects. There is also a handful of moves that everyone can use, like Investigate a Mystery or Use Magic. You roll your 2d6 and the narrative is flourished based on the result.

The book suggests that you have 2-5 players. One of the players is a Keeper, who runs the game and sets up the mystery. The others are Hunters with various archetypes. The Keeper role is to present a mystery and then let the Hunters figure it out. It actively encourages an improvised storytelling style rather than overly preparing. This allows hunters to solve problems based on what they want to do rather than having a prewritten solution to defeating the monsters. It is quite a lovely change of pace. I am a big proponent of collaborative storytelling that allows players to take control of the narrative in a positive way. The book gives the Keeper a ton of advice on how to control the narrative while also giving players a ton of freedom.

The mystery is the prime focus of the system. In essence, a monster or creature is causing issues and the hunters must come up with a plan to deal with the monster. The book does a pretty good job about making sure that the Keeper has the tools to handle the players improvisations. This includes how to deal with bystanders, and methods to keep the tension up in the story. I think I have gotten used to just reading stat blocks for monsters and NPC, that it is a pleasant surprise to see that there are guidelines for creating social archetypes. This is a concept that can probably be lifted and put into many different games and perhaps that is worth the price of the book alone. This book just seems like a good study on what a narrative arc could be in a game.

I was initially not interested in Monster of the Week. The theme of urban fantasy and monster hunting was never really my cup of tea. The book often uses examples like Buffy the Vampire Slayer, and while I have watched the show; I have never been interested in playing it. And then I realized that I didn’t have to play that kind of game with this system. The book gives us a scenario about a mad scientist type dealing with apes. The villain is an unbalanced professor conducting experiments on apes. It was then that I realized that the monsters I create doesn’t have to strictly be based on the supernatural. I can run an alien invasion within this ruleset quite easily. This is my fault for misunderstanding what the term “Monster” was in the context of the story. You can do more than paranormal stories within the book.

In fact, you can plot yourself any time in recent history and tell cool stories. Including things like space stations, steampunk settings, and even recent history. There is plenty of homebrew and historical fiction settings that you can use. While you may have to design new weapons, you can use many of these ideas in a fantasy setting even. Take away the guns and add bows and crossbows and it might work with a little bit of grunt work. However, at that point you might as well pick up Dungeon World instead.

I think this is a worthwhile system to pick up. The mechanics are easy and if you can convince your group to leave fantasy D&D, then this can be a great next step. I usually enjoy systems that have a complex set of rules. Even though this game is more fluid, the game feels supported by a system that can help streamline the narrative in a positive way. This is a high recommendation for me. Even if you are not into mystery stories, it is a good example of game design and what you can do in this artform.

You can purchase Monster of the Week here.