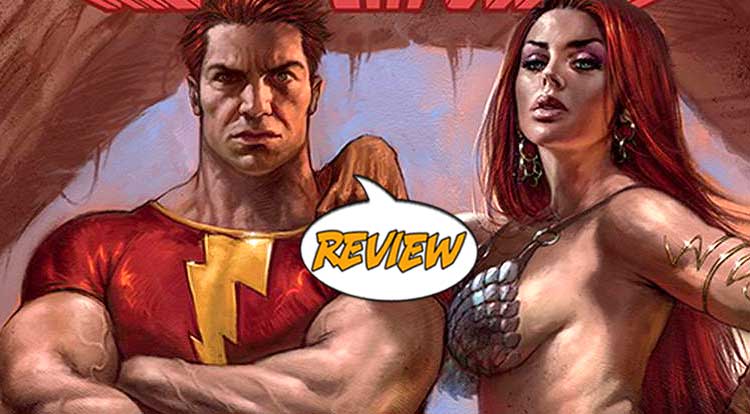 Can the Project actually work in concert with the She-Devil with a Sword?  It all depends at whom she’s pointing her blade.  Your Major Spoilers review of Red Sonja: The Superpowers #3 from Dynamite Entertainment awaits! Previously Red Sonja: The Superpowers:  Sonja does what she does best: Kills.  But when she slays a magical being, hell (literally?) comes calling.  The science explorers of The Project that had considered Sonja a threat, must now trust that the She-Devil With A Sword is actually… a hero?

TO SAVE HER OWN SKIN?

The representatives of Project Superpowers (Captain Future, Mr. Raven, The Sword and Vana of the planet Antaclea) have been captured by the wizard Skarab Nor and are being slowly crushed to death by his mystical thralls, all the while insisting that magic can’t be real.  Skarab vows to kill them, but suddenly Red Sonja arrives to warn him how hard they are to kill.  She informs the wizard that she was sent to kill him, but that she has assessed the situation and knows the cannot kill him, and so is going to leave.  Before she goes, she reminds him of the heroes’ various gadgets, causing him to devote his attention to the strange technological marvels and allowing her to sneak attack, removing his arms.  Her attack frees Vana, who uses her gear to assist Sonja in getting the kill on both wizard and gargoyle alike, leading Captain Future to realize who the heroic representative of her world should be.  As the issue ends, they convince her that riches await if she goes with them, and teleports Sonja back to their headquarters.

I haven’t kept up with the events of Project Superpowers, but this issue implied that Captain Future and company each come from different realities, which I don’t remember being part of the premise last time I read their book.  That said, it’s a nice MacGuffin to get the heroes to Red Sonja and vice versa, and after two issues of distrust and occasional disemboweling, she’s finally trusting of the strange “daemon” people.  That said, the balance of action here is strongly tilted in her favor, as none of the male heroes get in so much as a single shot, while Vana only plays backup long enough for Sonja to strike her killing blow.  Moreover, Lau’s art feels like it’s reverse engineering the heroes’ garb from the point-of-view of Red Sonja’s sword-and-sorcery world, with Raven’s cape seeming more like a flowing cloak, Captain Future looking like a muscular Conan and The Sword’s chainmail looking much more medieval than I remember it.  I’m also not sure about Sonja’s speech patterns in this issue, as she communicates in third-person Hulk-like speech, i.e. “Sonja hates magick.”  I’m not sure if this is a change that I just haven’t seen yet or something unique to this book, but either way it’s a bit confusing.

BOTTOM LINE: AN ODD PAIRING, BUT IT’S AN OKAY READ

Even though this feels less like a crossover than the supers guest-starring in a Sonja story, Red Sonja: The Superpowers #3 works pretty well as a narrative focused hard on Sonja, with some fun swordplay and strategy in play and a cliffhanger ending that I would have liked to see earlier in the run, earning 3 out of 5 stars overall.  The art is strong, the story has a lot going for it, but I’m still not entirely clear what the endgame is, and that is an issue three issues into an ongoing story, especially if it’s only six issues long.

The measure of any crossover is in how well it balances the players, and while Sonja's speech pattern is a bit odd, she is well-represented. Unfortunately, the odd grouping of Superpowers gets short-changed.