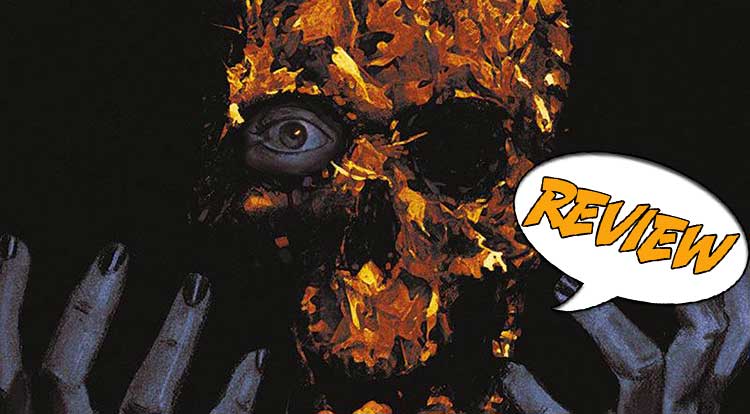 Kat is finding her place in Comfort Notch, but an unexpected death and a new lead shake things up again. Find out how in the Autumnal #5 from Vault Comics!

Previously in The Autumnal: Finding her mother’s photographs leads Kat to research a fire that killed several children. As soon as the librarian realizes this, she kicks Kat out, but not before she finds the name of a few survivors. This leads her to Carol Ravintzky, blunt, abrasive, and ostracized. She in turn shares the story of Clementine Biddle, an abused woman from long ago who killed the Mayor and his son. She was exiled, and ultimately gave herself to the forest as a sacrifice. And ever since then, there are some autumns where Clementine chooses a child for sacrifice…

THE MASK OF THE NICE

The Autumnal #5 opens on a bus with Kat talking to Carol Ravintzky. Kat has done a lot of thinking about running away – and running toward, a shift in mindset which allowed her to escape some of her own demons and get on with her life. Kat has gotten Carol to a medical appointment, a first step in helping her get clean from drugs. Carol is appreciative, in her own abrasive style. They part on good terms, although Carol warns Kat about the impending equinox – and that Clementine Biddle is always listening.

Kat goes to the diner and a man, Hal Hardy, the current Mayor, introduces himself and invites her to eat with him. He refers to both Trudy and Carol as troublemakers, people who don’t just let sleeping dogs lie. He reminds Kat that Comfort Notch is a nice town full of nice people. His ancestors were Clementine’s victims all those years ago. And he assures her that there are no missing children, and there have never been.

Kat goes home and rakes leaves. Mrs. Dobson, the neighbor she inadvertently antagonized, walked Sybil home from the bus with her boys and has come to apologize. Sybil comments on her raking and asks if she misses her guitar. She has pawned it off, along with many of her mother’s belongings, to make ends meet. She gets the guitar back. She starts playing it, and Rob stops by. This is a mature readers book; they have some adult sexy fun times and then Kat notices her phone. She has several messages from Carol. She leaves in a hurry and asks Rob to take care of Sybil.

Carol is dead. The police on the scene won’t let Kat see her. They tell her Carol’s death was an apparent overdose. This hits Kat really hard. When she gets home, she finds that Sybil has a card from Trudy’s funeral, from the one flower arrangement. There is a name on it, Jewel.

She does a little digging and discovers the assisted living home where Jewel is. She and Rob visit her. She apologizes for not being at Trudy’s funeral. She talks about how much Trudy loved children, and how upset she was when she sent Kat away. This is not what Kat remembers. The talk shifts to Mr. Dobson’s funeral, and then to Clementine. Jewel starts calling Kat “Trudy” and reminds her of the day she came running to Jewel’s house because her daughter had been chosen by Clementine. Trudy’s daughter. Kat.

The art of The Autumnal #5 is beautiful and unnerving. It is plainly autumn. When Carol and Kat part company at the diner, the air is full of fall leaves. They blow around, spectacularly orange and red. And we think nothing of them until, perhaps, Carol whispers about Clementine always listening. That reminds us that she is associated with leaves. As Kat has her lunch with the Mayor, we cut back briefly to Carol walking home. She gets caught up in a swirl of leaves and, unheard by anyone, shouts out an apology as she hunkers down to protect herself. When Kat hears about her and goes to meet her, we see she is already in a body bag. There are leaves on the ground. We don’t see her, but we remember the images in earlier issues.

The facial expressions in this issue are particularly moving. Everything takes place over a day or two. Kat runs through a full gamut of feelings. At the start, she feels good about making friends with Carol and being able to connect with her and to help her. The encounter with the Mayor makes her doubt herself a little, only to be followed by getting weirded out when Mrs. Dobson apologizes. Carol’s death is like a ton of bricks, especially since it means she doesn’t get to talk with her again. She is shaken by the time she goes to see Jewel, and that conversation takes us out of the opening lightness and plunges us back into the horror.

The Autumnal #5 has established this title as a stunning and imaginative horror story that feels genuinely tied to history.

Kat finds a strong connection in Carol, but little does she know that connection is soon to be severed.