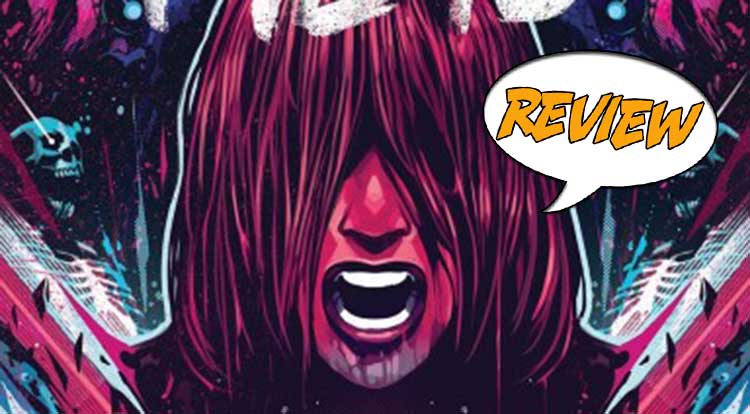 Ami gets an unexpected surprise when the House sends Buzz to help her. But who are the newcomers also looking for ghosts? Find out in Home Sick Pilots #4 from Image Comics!

Previously in Home Sick Pilots: Ami continues to help the House gather up its ghosts, but she wonders why Rip and Buzz have not come looking for her. She doesn’t realize that they have. Rip has been skipping school and taking drugs. Buzz is singled out by the police for questioning. We find out that he has been exploring the Old James House and taking notes as he does so, realizing that the rooms do indeed move around. He has also done some research on the house, which belonged to a man who had a fortune, had a run of bad luck, and lost almost everything. Ami goes out for another ghost and finds more trouble than she anticipated. And the ghost of the Old James House gets Buzz to pick up the “lucky” horseshoe!

Home Sick Pilots #4 opens with a twist – some additional characters who know about the ghosts. They located one on Santa Manos and detected someone else there – namely Ami, although they don’t yet know that. Ami is in the middle of a fight with a videotape ghost, and it is a challenging one. Meanwhile, the Old James House ghost tells Buzz to go make her lucky and sends him flying/leaping across town. Ami compares her experience, from the exhilaration of first discovering her new powers to realizing she was captured, to that of first getting into the punk music world.

Buzz arrives and throws himself into the fight. The videotape ghost is resourceful – and tough. Buzz grabs Ami and jumps away with her. When they land, Ami remonstrates with the house ghost about how it promised not to drag anyone else in. Buzz reveals himself, and this is when Ami finally learns that he has been looking for her every day; she has just never been there when he has. She justifies this by assuming the house followed her plea not to let anyone else get hurt. Then Buzz breaks the news to her that the Nuclear Bastards are all dead.

Now this is interesting. Ami feels a connection to the House now, and her first reaction is to assume that this was a mistake, that the House was confused. This is such a human reaction. This is why it can be very hard to break up with someone even if they’re awful. Buzz insists that it is not safe, and the ghost of the House appears. Buzz thinks it may be the ghost of the original owner. Ami does confront him.

Before he can answer her, the people we saw at the beginning show up, and they want the ghosts. The Old James House ghost grabs Ami and departs without taking Buzz with them, and perhaps even taking the power of the horseshoe. Ami thinks about choices she’s made in her life, the awful first boyfriend she had – and the awful haunted house she is now with.

The creativity in the artwork of Home Sick Pilots #4 is astounding. Some of the ghosts we’ve seen manifest in things around them. A case in point is the videotape ghost. And old VCR cassette has two spools that the tape winds around, and as it happens, those can look like eyes. I’d never seen that before; now it may give me nightmares. This ghost’s body forms from the tape itself, pulled free from the cassette where it can take on any form. Sometimes it looks very humanoid, and sometimes it is more like a creature with long tentacles. I love seeing something so commonplace be made to look so threatening.

And if that isn’t scary enough, the new characters have got their own special kind of creepiness. When we meet them, they’re communicating with someone who is represented by the silhouette of a hand behind a frosted pane of glass, or static covered screen. That communication is by tapping. Is it a projection? Is this woman – for it is a woman they’re reaching – trapped? If she is trapped, where is she exactly? The blue light of this glass looks so modern and stylish.

BOTTOM LINE: CAUGHT IN A WEB

Home Sick Pilots #4 has set up what is going on, and we realize now that we do not understand why it is happening. We’ve only touched the tip of the iceberg. Suddenly, rounding up lost ghosts appears to be even more dangerous than we first supposed.

Buzz finds Ami, and they discover that someone else is looking for the missing ghosts!