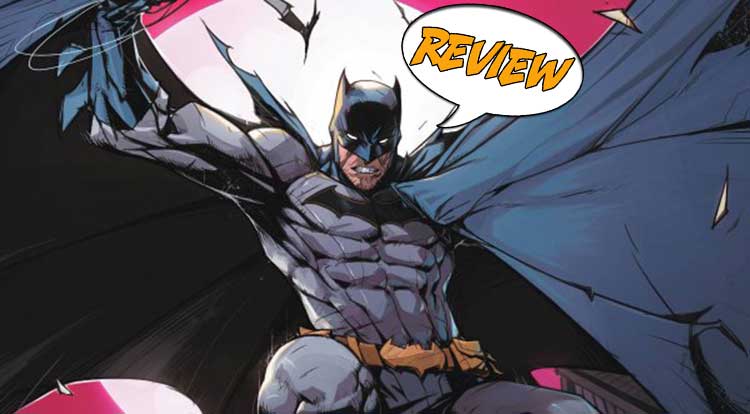 Batman isn’t the only person in town, many heroes and villains call Gotham home.  Your Major Spoilers review of Batman: Urban Legends #1 from DC Comics, awaits!

Batman: Urban Legends #1 opens with a story focusing on Jason Todd AKA The Red Hood.  This story revolves around the dual investigations from him and Batman into a new drug hitting the streets called Cheerdrops. The duo spend their time following up on different leads and reminiscing, all while trying to avoid actual contact with each other.  The next story involves Harley Quinn.  In this one she searches through what appears to be her old home that she shared with Poison Ivy.  As she moves through the place she recalls her days with her until she develops a new resolve.  Up next Is an Outsiders tale set in Japan.  Here we see Black Lightning trapped in some sort of jail.  As he works out how to escape he recalls how he found himself there. He and Katana were on the run from a group who apparently is not very happy with Katana for something she did.  Finally, this collection ends on a story featuring Grifter.  In this one he has taken on the role of Lucius Fox’s bodyguard, but it appears that he is doing some dirty dealing on the side.  After a mysterious meeting with some of Gotham’s criminal element he has a run in with Batman that doesn’t go his way.

ONE GOOD, ONE BAD, MOSTLY ALRIGHT

While most of Batman: Urban Legends #1 is fine, it definitely starts with its best offering.  The story of Jason and Batman circling around each other not only in their investigations but in their memories is well executed.  Also, seeing a more brutal showing from Jason rather than the “Punisher lite” that has been common for the character ever since the New 52 was a nice change of pace, even if it’s only to set up more conflict with Batman later.  After that things get progressively worse with each story.  The Harley Quinn tale is sweet, but it has very little in terms of actual content.  The same can be said for The Outsiders story, although the reveal about the prison was a nice touch.  Finally, the Grifter story is just not very good.  It’s clear that they’re trying to go for the “root for the bad guy” sort of angle but really, Grifter just comes off as sort of unlikeable and with no connecting tissue, everything in this story feels like disconnected events.

Batman: Urban Legends #1 while living up to its promise of being a collection of stories featuring characters from Gotham who aren’t Batman, it ultimately comes across more like one of those promotional issues that are supposed to drive the reader to other series’. In fact, the Harley Quinn story explicitly states it’s to be continued in a new series.  This makes some of these stories feel incomplete and lacking character.  The exception to this so far is the Red Hood story which is legitimately interesting and well done.  3 out of 5 stars.

With the exception of the first story, most of these stories feel incomplete or lacking enough content to be considered a full chapter of a larger story.