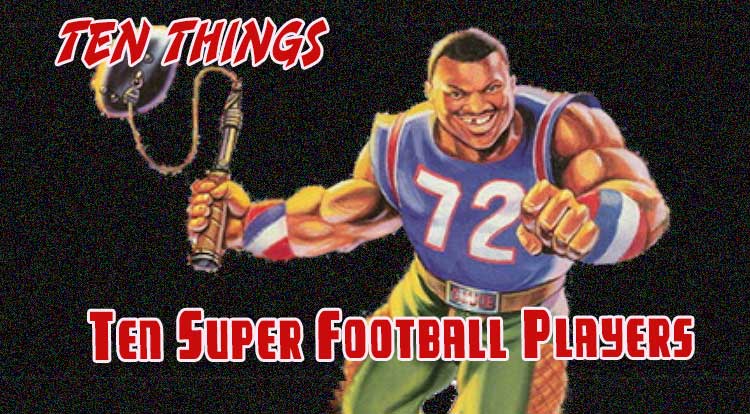 Whooshman-Bicarbonate Films, in conjunction with An Amateur Comics Historian and the rear quarter nose tackle, Presents:

Though the original backstory for our man Flash had him as a polo player circa 1934, by 1980 nobody knew what polo was, other than a recurring gag on ‘Gilligan’s Island.’ Instead, Sam Jones’ incarnation of the legendary hero became the quarterback for the New York Jets, accidentally transported to planet Mongo in the opening moments of a burgeoning interstellar war. Along the way, he fights Ming The Merciless, makes friends of the Treemen and the Hawkmen, nearly dies, falls in love and ends up flying blind on a rocket cycle. It’s intense, you guys. Even though I’m from the Midwestern United States, I can’t ignore the fact that “football” means something different to the vast majority of the world. To that end, meet the leader of the Striker Force 7, international fútbol sensation Cristiano Ronaldo dos Santos Aveiro, who has to assemble a ragtag group of supers from around the world and forge them into a team to save the world from annihilation! Fortunately, their leader is a superstar in his sport, so it should work out as well as it did for Bill Murray and the Tune Squad. A star athlete in college, Victor Stone was terribly injured in an accident that also killed his mother. In order to save his son’s life, Papa Stone used stolen Mother Box technology to turn his son into a machine/human hybrid, giving him fantastic new powers but alienating Vic due to a perception that he had become a freak. Fortunately, Batman and Wonder Woman arrived to offer the newly minted Cyborg a place in the Justice League, using his new body to fend off an alien invasion from Apokalips.

At least, that’s the story til the Sn*d*r C*t drops. The grandson of Golden Age hero Commander Steel, Nathan Heywood was a football prodigy until an accident shattered his knee, forcing the amputation of part of his leg. When a group of throwback super-villain jerks targeted his entire family as a warning to anyone who would wear patriotic colors like Grampa did, Nate was accidentally splashed by liquid metal. HIs body absorbed the strange substance, rebuilding his body in pseudo-steel, including growing a new leg. Unfortunately, though he’s now durable and super-strong, the steel coating mutes his tactile senses, making him the proverbial bull in a china shop. Doctor Walter Langkowski was an honors student, paying for his education with a football scholarship, and even turning pro for the Packers before devoting himself to gamma research. An accidental overdose bonded him with one of the Great Beasts of Canadian lore, as well as empowering their hybrid form with strength comparable to a Hulk. Walter became a founding member of Alpha Flight, Canadia’s premier super-team, died for a while, fell in love, spent some time in the body of his female teammate, died again, then didn’t, and when last seen was trapped in the underworld, with his body possessed by the soul of equally dead Doc Samson. In the strictest sense, this should only count as half an entry, as high school football star Ronnie Raymond and physicist Dr. Martin Stein were both part of the original Firestorm matrix, but the Professor isn’t exactly the athletic type. The duo went through a lot of changes together, including the discovery that Martin alone was supposed to become the Earth’s newest fire elemental, Ronnie getting leukemia, recovering, dying a couple of times and being replaced as Firestorm. The New 52 reality rewrote everything and returning Ronnie to high school, but their current status is unclear. After a tragic, albeit heroic end to his career, Phil Grayson’s injuries were too great to continue playing football professionally. Transitioning to a sideline reporter gig, Phil was accidentally empowered by the fumes off burning football souvenirs into a superhuman powerhouse, donning an invulnerable custom football uniform to punch evil. NFL Superpro is remembered for his love of puns and campy dialogue, even if the National Football League will likely never allow his adventures to be reprinted for copyright reasons. When Abin Sur’s ring was dispatched to find a replacement Green Lantern, both Hal Jordan and former college football ace Guy Gardner were equally worthy, but Jordan was closer. Eventually Guy was chosen as official backup Lantern, but a head injury left him in a years-long coma, after which Guy was a different man. Aggressive, belligerent, sexist and crude, Guy nonetheless made his mark among the Corps, eventually taking his place among the Green Lantern Honor Guard and making his peace with Hal Jordan.

HIs iconic costume is much better than this one. Shown here wearing gloves for some reason, Dr. Henry P. McCoy was born a mutant, with superhuman strength, agility and massive feet and hands. His athletic prowess made him the star of the football team, but also created resentment among his teammates until he left public school for the Xavier Academy. These days, he’s mutated himself even further and his primary ability seems to be his genius intellect, but there was a time where he was considered one of the heavy hitters of the Marvel Universe, on a par with The Thing.

Seriously, though, why is he wearing gloves? Another who made their way through school on a football scholarship, Jack Wheeler eventually had to drop out, joining the Marines. When his platoon was wiped out in a sneak attack, Wheeler left the service and returned home to Iowa, where his rage simmered. When his lady love was killed by a criminal’s gun, he created his vigilante alter ego, based on his old football team mascot, and took to the streets of the Quad Cities, dispensing high-caliber justice. Like so many heroes, Wild Dog is a pure product of the era from which he sprung, but his look is one of the best in the DC Universe. Wild Dog was last seen in the company of Cave Carson, shooting evil beneath the surface of the Earth.

Thanks to Faithful Spoilerite @J_Michael_T for this week’s topic, Ten Super Football Players! Feel free to follow along @MightyKingCobra for more Ten Things madness on Twitter. Or, you can check out the full Twitter archive here! As with any set of like items, these aren’t meant to be hard and fast or absolutely complete, especially since Either way, the comments section is below for just such an emergency, but, as always: Please, no wagering!