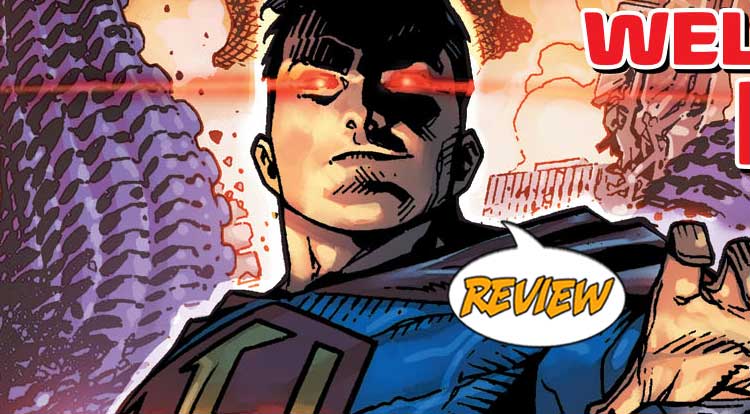 Previously in Crime Syndicate:  The Multiverse is reborn-and Earth-3 with it!  Witness the true origins of the malevolent makers of mayhem known as the Crime Syndicate as a common foe unites them!  But how long can alliances last between villains like these?  And what is the secret of Superman’s counterpart, Ultraman?

NOBODY HAS A GOATEE?

Our story begins in 1963, as a schoolkid version of Ultraman murders someone who is implicitly President Kennedy, freeing people from his regime and causing them to cheer for their…  I guess hero isn’t the right word, is it?  In the present day, Ultraman runs his city with an iron fist, including a visit to the Daily Planet to threaten them for presenting “fake news” about him and letting Cat Grant know that he’ll be back to murder every single person in the entire building should it happen again.  In Washington…  Err, sorry, Arnold, D.C., named for this universe’s founding father, Benedict, Superwoman has full control of President Oliver Queen, thanks to her overtly sexual and really unpleasant mind-control powers.  In Coast City, John Stewart finishes executing a couple of corrupt cops, while the super-speed thrill-killer Johnny Quick and his girlfriend Atomica murder innocents in Central City.

That’s when Starro The Conqueror arrives.

THE SIXTH VERSION OF THE CRIME SYNDICATE?

This issue sets up some interesting variations on the themes of “Brave and The Bold #28″, assembling the members of the Syndicate and showing us just how different they are from their Earth-0 counterparts.  There’s even a six-page backup featuring Ultraman’s origin (drawn by Bryan Hitch!) that is arguably better than the lead story, which isn’t half-bad.  It’s just…  We’ve seen this all before.  The original Crime Syndicate back in the Silver Age, the revamped version from Qward post-Crisis, the antimatter version from the Morrison/Quitely JJLA OGN, the version from Countdown, the ‘Forever Evil’ Crime Syndicate…  And this issue ups the ante, keeping the BDSM Superwoman but making her even more disturbing, making drug addict Johnny Quick also a murderer, making Ultraman spout Trump catch-phrases.  It just doesn’t work for me, feeling like set dressing so that we can once again show the heroes of the Justice League as criminals, killers and monsters of all stripes, and given that this series is spinning out of Death Metal, which was chock-full of such portrayals already, this issue is more exhausting than entertaining.

BOTTOM LINE: THIS IS JUST NOT FOR ME

That’s not to say that Crime Syndicate #1 is a terrible comic book, as the art and story are on a par with DC’s recent output, and some of the character tweaks are pretty good (Atomica’s costume, for one), but it’s not a book that I’m particular interested in, as I feel like I’ve read this story in multiple places and at least two of them were more ground-breaking, leaving this issue with a not-half-bad 2.5 out of 5 stars overall.  If you’re not as tired of dark takes, evil Supermen and strangely judgy takes on Superwoman’s sexual preferences, it might be up your alley, but it’s not a comic book for me.

It's not a bad comic, but there's nothing really new about it, either.