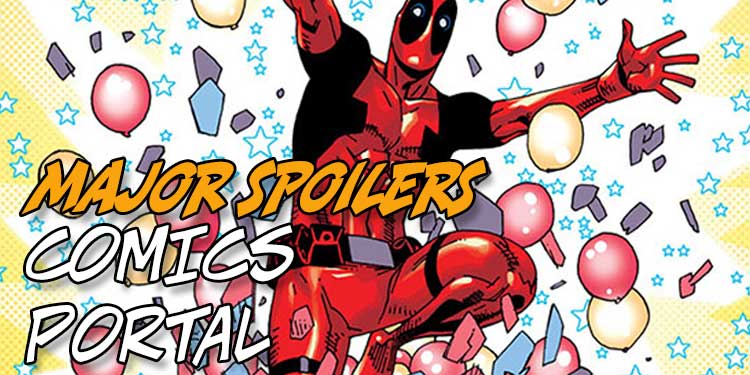 Anniversary celebrations are getting to be quite the thing in comics! This year, for example, Deadpool is 30 years old! What’s that all about? As seen here on MajorSpoilers.com a few days ago, Deadpool is celebrating 30 years of appearing in Marvel Comics! Here’s the description of this specific anniversary series:

DEADPOOL: BLACK, WHITE, AND BLOOD will be packed with Deadpool’s wildest stories to date, all depicted in a prestige black and white format—with a heavy splattering of blood all over! Each action-packed issue will have an all-star lineup of creators teaming up to honor the character’s incredible legacy with the kind of chaos and violence that Wade Wilson loves!

Of course, there are other celebrations going on for the Merc with a Mouth (comiXology just concluded a Deadpool sale, for instance), so keep your eyes open for them!

I don’t know why this hit me while I was researching this column, but man—we are recognizing a LOT of anniversaries in comics these days! Granted, Marvel seems to prefer to highlight the number of years a character or group has been around while DC tends to focus on the number of issues (as in Detective’s #1,000 and The Flash’s #750), but no matter how it is done, it’s happening!

I remember when a comic being “five years old” was a BAD thing, the word OLD being the operative one. That meant someone or something had been in the industry so long he, she, or it couldn’t be consider “new” and “exciting” any longer. It was now established and predictable, so it wasn’t fun and “with it” any longer.

Still, in a business that rarely has a series or a character even last more than 12 months, I’m actually glad we’re paying attention to these events! There are a lot of creators who would absolutely LOVE for their creations to be around that long!

MY EXPERIENCE WITH DEADPOOL

I’m always happy when I get in on the ground floor with a big trend in comics. That was not the case with Deadpool.

The red and black costume just didn’t sing to me when I first saw it. However, I saw several fans picking up Deadpool’s escapades a lot, so I decided after a few months to give the book a try.

I found it entertaining, particularly the word play. “You must be hankering for a spankering” was an early example that I found funny, so I bought it for about five months. But I slowly lost interest when this “anti-hero” became predictable to me. He always went the way of the odd or the silly, it seemed, so I removed it from my pull list, much to the chagrin of the store owner. “You’ll regret this!” he told me.

Over time, I would glance at his title, but the issues never seemed to live up to those first ones I bought. I know some fans like it when a book is, shall we say, off-color or not what most fans might expect, and WW certainly does have his devoted fan base. They celebrate their birthdays with Deadpool cakes and doing strange things to plush unicorns and such.

I’ve never read Gwenpool or any other “Gwen”-carnation, though. Somewhere poor Gwen Stacy is turning over in her comic grave, I believe. At least it seemed that trend was fizzling out before COVID-19 hit.

Before that pandemic arrived, Deadpool fans made their presence known at cons quite a lot. I would see many people dressed in Deadpool costumes at conventions, often in a conga line dancing their way across the Artist Alley or in front of sales booths. Of course, all you really needed was a Deadpool mask—the rest was optional, from Hawaiian shirts to other-hero garb. His fans certainly lived up to the character’s reputation, especially when they would stop in front of a creator trying to sell his or her wares at a con and dance there for up to a half hour. What could that person do? He or she would often take a break and leave a con helper to sit and guard the table until they finally danced on. Once that took place, the person could make money again!

When the first movie came out, I didn’t go. I can honestly say I’ve never seen either of those films because of what I heard about the “unicorn” sequence. Uhhhh, yeah, that’s not my style, thank you. If you like that kind of humor, more power to you! But I am not going to watch something I’m likely going to wish I could immediately unsee! Right now, on the ever-accurate Internet, rumors are circulating that Ryan Reynolds is considering NOT coming back as the titular (heh, heh… he said “titular”) character, but this just sounds to me like a not-so-subtle request for a bigger salary. We’ll see.

WW’s popularity even caused DC’s Harley Quinn creative team to make a character much like him, and that was Red Tool, who was developed by Jimmy Palmiotti and Amanda Conner. They had received so many requests to have Deadpool meet Harley that they thought this was the next-best thing since the companies wouldn’t allow it.

I HAVE A REQUEST Of course, I do have a suggestion that I’d like the House of Ideas to consider.

I’ve often interviewed Geek-Girl creator Sam Johnson for my weekly podcast. He makes no secret of the fact that he would LOVE to write Deadpool at some point. Based on how he’s written other books and his enjoyment of the character, I’d highly recommend you give him a shot, Marvel! He’s a witty and creative writer, something the Merc with a Mouth could use more of, I believe!

Okay, I actually do have TWO requests! If Marvel and DC could let Harley and WW have a crossover comic, I think that would be a lot of fun! In that circumstance, I would ask that Mr. Palmiotti and Ms. Conner do the creative work on that story!

The thing about what I call “the anti-hero’s anti-hero” is that he’s always got to stay off the beaten (heh, heh… he said “beaten”) path and do things that other comics characters would really never do.

While I normally say that a writer shouldn’t have anything to do with a character he or she wants to make significant changes to, that actually might be good for Deadpool… as long as they are true to WW’s original intent.

I’m not sure what the future holds for Deadpool, but I’m sure many of his fans will want to be around for his 60th year in comics, at least!

What do you think? Is Deadpool still the Merc with a Mouth you enjoy? Who would you like to see make his stories? Do you want the Deadpool movies to continue? Whatever your opinions, be sure to share your thoughts in the space below!