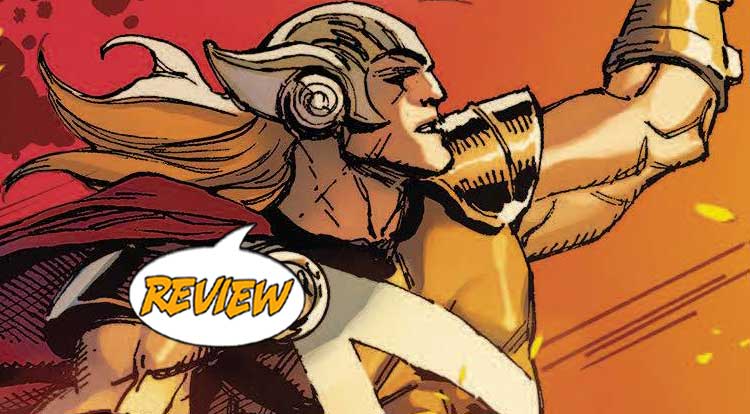 Empowered by the Phoenix, forced to fight, The Avengers’ numbers are dwindling… and now Thor has another problem on his hands.  Your Major Spoilers review of Avengers #43 from Marvel Comics awaits! Previously in Avengers:  As the greatest heroes and villains of the Marvel Universe are trapped within the battle to decide the all-new Phoenix, a bloody battle that has narrowed to a handful of desperate combatants.  Thor leads the rest of the Avengers in the fight to contain the Phoenix Force on Earth, in a quest complicated by the Thunder God’s own mysterious connection to the cosmic firebird.

Things are not going well in the all-Phoenix tournament, as Wolverine and The Black Panther go toe to toe in a battle of Adamantium versus Vibranium.  It’s a fight that takes up most of the issue, featuring the greatest Wolverine line in recent memory (“Adamantium… It’s pretty much all I’m made of, other than bacon and beer”) and both heroes have to make some difficult decisions during it.  Meanwhile, She-Hulk and The Valkyrie face off, Red Widow takes out The Black Knight, American Eagle falls to Shanna The She-Devil and Namor vows that he will be happy to kill Captain America if he has too, decades of friendship be damned.  As for the Thunder God, last issue’s greeting from the Phoenix is explored, as the firebird tells him that she, not Gaea, is his true mother, finally brining some of the 1,000,000 BC Avengers plotline to the forefront.  The issue ends with an enraged Thor ready to consider desperate measures, while the final six face off to see who the new Phoenix will be… including Captain America facing the Black Panther!

The biggest problem that I have with this issue’s revelation by Phoenix is actually voiced in-universe by Iron Man, who wonders why none of them can just have regular parents.  Given that his father has been revealed to be an agent of Hydra, Captain Marvel’s mother is actually a Kree warrior and Shang-Chi’s dad is Fu Manchu, it’s a valid question.  But it also calls out the tendency to retcon in a very obvious way for me, lessening my appreciation of the story.  (I’m also miffed that American Eagle’s fight doesn’t even appear in the issue, as one of his twelve fans, but that’s beside the point.)  The build towards the reveal of a new Phoenix has been mostly well-handled, but the meta-textuality and medium awareness of this particular arc has bothered me.  Still, the combination of some really good art by Garron (including Phoenix-ized designs for the heroes that are excellent across the board) and Aaron’s usual spinning-plates plotting has held it all together, especially given some of the unexpected wins and losses during the battles.

The downside of Avengers #43 isn’t necessarily that the Phoenix Force being Thor’s mother is such a terrible idea, but rather that it could be poorly executed and/or become a huge knot of meta nonsense, but the strength of the art and the successful character moments hold things together for 3.5 out of 5 stars overall.  If nothing else, we finally know whether Adamantium or Vibranium is the superior made-up metal.

The battles are fun, but Black Panther/Wolverine dominates the issue a bit too much, and the Thor reveal is hovering in the realm between Genius and Cheese Sandwich. It could go either way, but this issue manages to pull everything together pretty well.