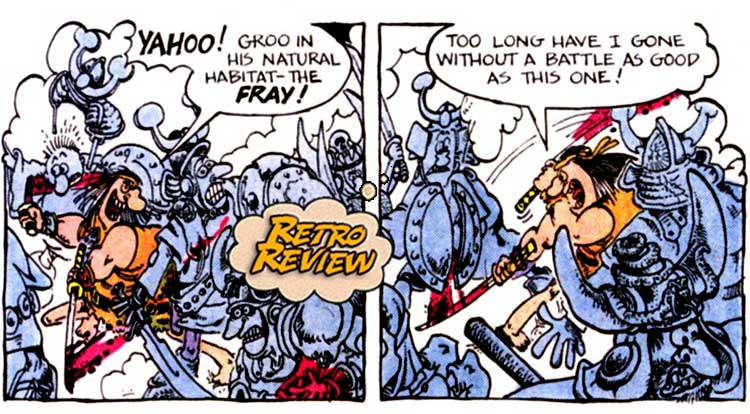 He’s fast, he’s deadly and he’s as dumb as a denim sack of cat hair.  Your Major Spoilers (Retro) Review of Groo The Wanderer #1 awaits! Previously in Groo The Wanderer:  Legendary Mad Magazine cartoonist Sergio Aragonés conceived the idiot wanderer Groo back nearly a decade before this comic saw print, but wasn’t interested in giving up the rights to his creation.  When Eclipse Comics created a benefit book to help support Steve Gerber’s legal battle with Marvel over the rights to Howard The Duck, Sergio and Mark Evanier pitched in with a four-page story featuring Groo’s first published story, following up a few months later with this comic.  Sergio himself points out the irony of his situation in the opening pages of the comic. I love Aragonés art, always dynamic and dramatic, with some of the most ingenious storytelling of all time, so I love every panel of this issue, as every child who grew up in the ’70s is legally mandated to do.  Our actual story opens with Groo hiding from an army that wants to kill him.  Well, skewer him.  And hang him.  Or hang, then skewer?  Or maybe stab, choke, burn and maybe even get nasty.  The real question (for both us and our dull-witted hero) is… Why? Groo and his compatriots end up at a tavern forbidden to the soldiers for its debauchery and cheese dip, beating up an entire table full of revelers for a seat.  He orders drinks and whole stuffed pigs, but when he seeks out the company of some of the taverns ladies fair, he finds many of them occupied by one man. Groo realizes that delicacy is necessary here, assuring the undercover Priest that everything is fine.  “NO ONE WILL EVER KNOW THAT THE HIGH PRIEST OF ZUMU CAME HERE!”, he says with assurance and volume, leading to the excommunication of the High Priest and possibly earning his own army trailing him.  Or perhaps it was the time he set off to deliver a message from the princess to her love, Prince Tercios and accidentally devastated his army and sort of killed Tercios instead.  When you live the life of Groo, it’s sometimes hard to tell who wants to kill you the most.  And of course, there’s the need for a new job. Aragonés and Evanier have razor-sharp comic timing throughout the issue, and even in this first appearance, Groo is almost fully-formed as the character we know and tolerate today.  Groo ends up being hired as a hero to fight of a regiment of vicious soldiers, only to find them led by his old friend Taranto.  When he asks what their objective is, he finds that the army he’s just agreed to fight is the same army that wants to kill him, leaving us where we came in. There’s also a backup story of the genius called The Sage, who is just as useless as Groo is, only in the opposite intellectual direction.  Either way, this is a truly impressive first issue, as Groo The Wanderer #1 gets it right straight out of the box, with perfect art and a story that engages even if it’s a bit shorter than I’d like, earning 4 out of 5 stars overall.  The concept of Groo has really changed very little in the nearly thirty years since this book came out, making this not only a truly entertaining read, but one from which you could easily jump to the most recent issue without any comprehension problem, and that in itself is an impressive achievement.

Some of the running gags get their start here, and Aragonés delivers on the crazy visuals in a big way, making for a first issue whose fidelity with later issues is near-perfect.

If you see it, you should buy it.