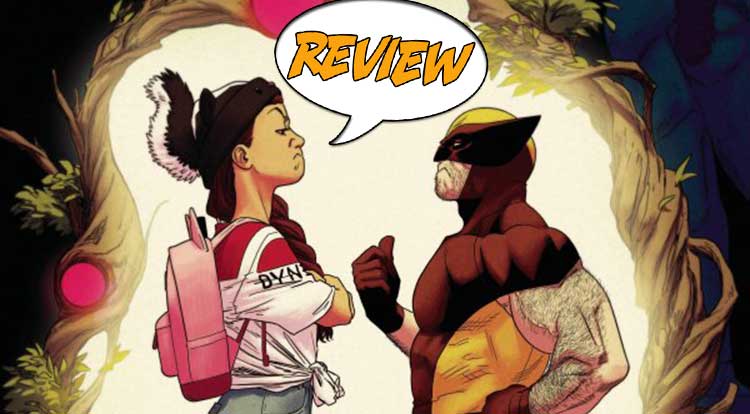 Just as things seemed to be finally settling down for The Runaways, here comes the X-Men to shake things up.  Your Major Spoilers review of Runaways #34 from Marvel Comics, awaits!

Previously in Runaways: The team is still not in a great place after their time with Doc Justice, but things get even more hectic as Wolverine and Pixie from The X-Men show up, claiming that Molly contacted them asking to be taken to the mutant nation of Krakoa.

Runaways #34 opens with Molly slung over Wolverine’s shoulder as he attempts to take her away.  After some protests from Nico and Chase, and some role reversal between Logan and Molly, everyone stands down and begins to talk things through.  They realize that the mutant who had contacted the X-Men was not Molly, although she did make a request for more info via their website, but another mutant living nearby.  After examining the content of the emails they determine that this mutant might be in trouble so everyone sets out to find this person.  Once they reach the place where they think the mutant is they find themselves suddenly in a different place, filled with monsters.

It’s always hit or miss whenever The Runaways interact with other parts of the Marvel universe; they’re either unnecessarily combative or too eager to join in on whatever is going on.  Here though, there’s a nice balance and while things are clearly written to be more comedic, the interactions still make sense as everyone in this issue is trying to do the right thing in their eyes. Also, later on in the issue it’s nice to see Chase, Wolverine, and Molly able to let loose and thrash some monsters. The implication between Nico and Pixie towards the end though, came off as somewhat forced and a piece of lazy soap opera-like drama farming.  It’s not enough to sour the whole issue but it was definitely a low point.

While Andres Genolet’s art in this series has been perfectly fine for the most part, there’s a few things to mention in this issue. There’s a distinct lack of expressions going on here.  Also, on a couple of pages every character has the same mouth, which was more noticeable than usual. On the other hand all of the action was well depicted with a good sense of motion and clarity.

THE BOTTOM LINE: STANDARD FARE, IN A GOOD WAY

Runaways is a series that lives and dies on its character interactions and personalities.  Thankfully, this issue does a good job with both of those things.  The back and forth with the X-Men is enjoyable and the way the two teams work together in a fight is also well done.  The two downsides to this issue is some strangeness with the faces and a lackluster attempt at some last minute spice that was unearned. 3.5 out of 5 stars.

Runaways #34 is mostly fine as a comic. The interactions between the characters are good and there’s a good dose of action. A few missteps in the art and plot bring this down to mediocre though.