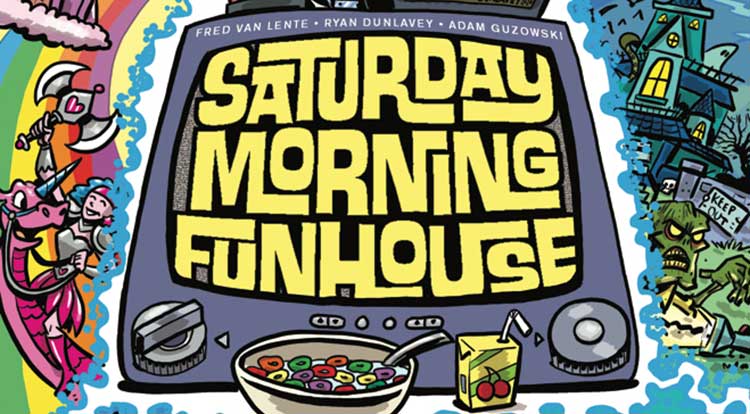 Animation has some big personalities – and makes big bucks. Follow along as cartoons make the switch from the big screen to the small screen in The Comic Book History of Animation #4 from IDW Publishing!

THE COMIC BOOK HISTORY OF ANIMATION #4

Previously in The Comic Book History of Animation: We have followed animation from the early days of silent film up to the early heyday of Disney Studios. World War II led to animation studios working on films for the defense industry. Racism made its presence known in animation in the post-war years, and then McCarthyism hit. In answer to this, the Looney Tunes studio (part of Warner Brothers) developed its own free-wheeling style. The art and style continued to evolve as studios tried to figure out how to profit as much as possible. And this was all in the days before TV.

GETTING FASTER AND CHEAPER

The Comic Book History of Animation #4 reminds us that, so far, the cartoons discussed so far were all created as film shorts. We who have seen so many Looney Tunes on television forget sometimes that these originally were short subjects that ran before a main motion picture. Around the time this practice was stopped, television was invented, and suddenly there were hours in the day that needed to be filled with programming. Many of those cartoon shorts were bought and moved to the small screen.

Television was heavily regulated. And remember, those early cartoons were made for adult entertainment. Many of them had to be edited heavily to remove adult subjects, violence, racism, etc. Re-releasing already-made cartoons was also highly profitable since production costs were non-existent. But as mentioned above, there were hours to fill. Hanna-Barbera came to be and pioneered a style that involved a lot less drawing – think faster and cheaper.

At this time, a single company would often pay for an entire show to be an exclusive sponsor. Even before the days of direct commercial tie-ins to cartoons, the shows essentially served as advertising, bringing in much more revenue than they cost. Production started to move overseas.

The story segues into the early days of animation in Japan. In the late 1950’s, Japanese animation was just getting started. Hayao Miyazaki saw the first Japanese feature-length color animated feature in 1958. He was also heavily under the influence of Osamu Tezuka, “The God of Manga,” who himself was heavily influenced by Disney and had also gotten into animation, creating Tetsuwan Atom, known in the U.S. as Astro Boy.

Television’s appetite for cartoons continued, unabated, as studios continued to try to keep up for less and less money. Interestingly, cartoons at this time were broadcast in prime time. It was not until the late 1960’s that a young Fred Silverman at CBS had the idea of making the Saturday morning block of time all kids’ programming. (I remember well the days of Saturday morning cartoons.) Silverman decided to commission original work, rather than rehashing old stuff. A tiny studio called Filmation created a Superman cartoon, and for a while, superheroes took over Saturday mornings.

Superheroes eventually gave way to Scooby Doo and many, many more. To keep up with production, more and more animation work was sent overseas. And in the 1980’s, the ban against overt advertising in children’s programming was lifted, paving the way for the overt merchandising of cartoons. Animation was becoming less and less about animation and ways to disguise the fact that not much movement was happening. Production had spread overseas. The U.S. was no longer the citadel of animation.

THE TIMES, THEY ARE A CHANGIN’

Like the Saturday morning cartoons that feature strongly in this issue, The Comic Book History of Animation #4 features bright colors and so many references to characters. We already see iconic characters representing their creators or other important people. Here we move from one company to the next and we get a sense of the explosion of demand for cartoons. And even though we see hints of so many (Rocky and Bullwinkle, Top Cat, The Flintstones, Space Ghost, He-Man, Transformers), we know this is only the tip of a very large iceberg. It boggles the mind.

The team is amazing as using the art to communicate some of the complex themes within this history. Words and pictures work hand in hand, the art not only illustrating the idea but communicating the emotions behind it. A small section discussing Japanese animation at the time shares a story about a finish inspector for cels who collapsed from exhaustion from the job. The art shows us her stress and Miyazaki’s concern, and illustrates Miyazaki’s observation about how animation in his country was taking advantage of good-natured young people who didn’t always fit in with society.

The Comic Book History of Animation #4 is gripping but almost exhaustingly frenetic. Despite the wealth of information, it feels like we’re barely scraping the tip of the iceberg. Nonetheless, it is enough to give us some terrific perspective on the art and business of animation.

The Comic Book History of Animation #4