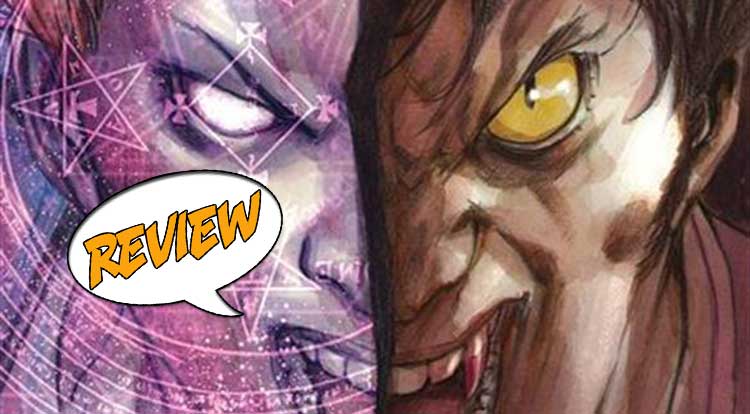 In Buffy the Vampire Slayer #23 from BOOM! Studios, Xander’s strength increases, while Buffy tries to marshal her forces to take down Sunnydale’s latest vampire king.  And while she’s about it, can Buffy handle Faith undermining her at every turn?  Find out  in your next mighty Major Spoilers review!

Previously in Buffy the Vampire Slayer: A classic tv series reimagined in comic form!  Familiar characters, doing unfamiliar things!  With Xander vampirized, and Slayers abounding, Buffy has had to contend not only with the usual – the undead, monsters and the like – but also the difficult interpersonal relationships that were a hallmark of the television show.  Nothing is easy, as Buffy keeps on finding out!

Buffy the Vampire Slayer #23 continues the fine reimagining of the television series that made a huge impact on a generation of viewers, and continues to resonate today.  With Xander’s machinations building, and Willow trapped in a strange realm, and Wesley throwing his weight around, Buffy has her hands full trying to protect everyone, including Xander.

I loved the television series.  It’s mix of adventure and romance and oft times thwarted love really resonated not only with me, but an audience that came to appreciate the strengths of the series – strong female characters, a sense that anyone could die at any time, and many, many interesting and entertaining stories.

With his Boom! Studios series, the television show has been reimagined, with characters in unfamiliar roles.  At the time, it seemed to me to be a strange thing to do, but over time, you can see the creative freedom it has given the people working on the series – there’s no continuity to bog them down, indeed, they can create their own continuity.  What we can see in this series though, is the old commitment to action and adventure, with a tangled series of relationships impacting on everything.

Buffy the Vampire Slayer #23 spends much of its page count in a holding pattern.  Buffy is struggling to save Xander and Willow, somehow, but Wesley and Faith are trying to thwart her efforts.  The biggest issue I had with it is that it is clogged with characters fighting for reader’s attention, and an art style that actively hampers easy identification of those same characters.

Buffy always had a big cast which provided the engine room of a series that revolved more around the interaction of characters than it necessarily did around fighting monsters and the like.  The advantage of television is that you can recognize the characters instantly – faces are imprinted on our brains.  When you have an artist interpreting those faces for the printed page, you’re constantly being forced to compare the interpretation with what you remember you’ve seen on the television screen.  More than once I had to flick back to confirm I understood who was speaking with reference to their name being used by another character.  It isn’t a deal breaker, but it does place something of a barrier between the reader and the actual story.

What Buffy the Vampire Slayer #23 does get right is the same thing that made the television series such compelling viewing – the characters.  This may be a reinterpretation, but the characters hit much the same notes as what they did on screen.  Xander being vampirized is the biggest change, though we see the same insecurities and hidden needs, though expressed through a body possessed by a demon, with all the terrible promise that entails.  Buffy seems to be struggling more here to keep everyone in check, with Faith and Wesley ganging up on her to undermine her role as the head of the Scooby Gang.  Giles, unfortunately, is pretty ineffectual, in this issue at least, but his scenes are short, so it isn’t too much of a problem.

Writer Jeremy Lambert handles the large cast well, as he does a complicated plot that has a lot of moving parts.  You can certainly ‘hear’ the voices of the characters when they speak, so he has their cadences down pat.  There are some nice fight scenes he has constructed, and certainly, those fight scenes are a chance for characters to emote their feelings to each other (seriously, just get a room, people) – which is a fond echo of what the television series did time and time again.

I realize I’ve mentioned the television series quite a lot.  It’s not to undermine the comic series, which is definitely its own thing and stands confidently on its own two feet.  While the television series casts a long shadow, this reinterpretation makes great use of fine characters in slightly different roles – which, creatively, makes for entertaining reading.

BOTTOM LINE:  NOT EVERYTHING IS AS IT SEEMS

Buffy the Vampire Slayer #23 features a lot of strong writing, and familiar nods to the show that spawned it.  It’s great to see familiar characters taking on unfamiliar roles, and if the visualization of the characters is somewhat confusing, I can say the art is strong and confident despite my difficulty putting faces to images.

A way station in a longer narrative arc, Buffy the Vampire Slayer #23 brings all the familiar feels that the show did - compellingly drawn characters in dangerous situations, squabbling and bickering, but always having each other’s backs - even if sometimes there’s something very pointy heading in its direction...