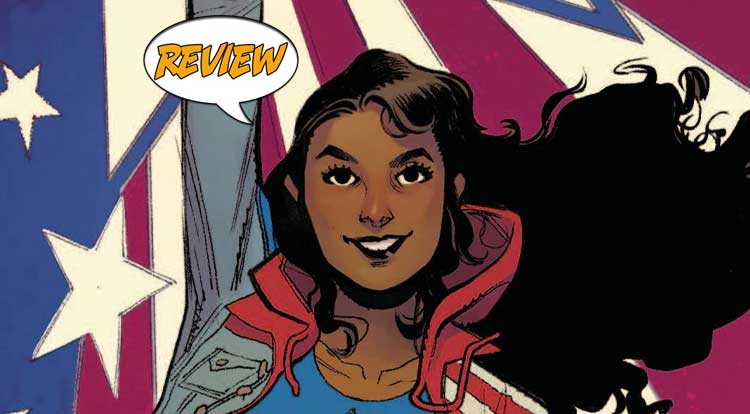 America Chavez: Made In USA #1 Review

Who is America Chavez?  And what will she do to protect the people she loves?  Your Major Spoilers review of America Chavez: Made In USA #1 from Marvel Comics awaits!

AMERICA CHAVEZ: MADE IN USA #1

Previously in America Chavez: Made In USA:  America Chavez is incredible: Her origins, her strength, her dimension-shattering star portals!  But when the foundation of everything she believes is shaken, America will stand up and face the parts of herself she’s been running from.

THE TRUTH ABOUT AMERICA’S PAST

Our story begins thirteen years in the past, on Jones Beach on Long Island, as the Santana family enjoys some stargazing… and finds a girl floating in the surf.  In the here-and-now, America and her best friend Hawkeye are dealing with a giant mutated mole, apparently left over from their run as West Coast Avengers, when America finds that her powers aren’t quite working right.  The arrival of a young woman who wants to interview her adds to the distractions, especially when she asks some pointed questions about America’s life in New York after leaving the Utopian Parallel.  The battle ends badly, but America’s girlfriend pulls her to safety, only for there to be news of a huge fire back in New York.  One teleport star (and a Spider-Man cameo) later, America saves her adoptive family from a fire, and discovers that someone has left her an ominous note, warning her to look out for her family.

If memory serves, this issue was originally scheduled for last spring, but y’know…  The Universe.  Even so, this issue doesn’t suffer too badly from being out of time, picking up from where the West Coast Avenger series left off.  It’s also interesting that the Image Comics series featuring America Vasquez (created by Ms. Chavez’ creator and originally solicited to appear at the same time as this book) has come and gone, as this issue seems to be trying to have things both ways with America.  The additions to her story in this issue restore some of the character’s original concept while maintaining the extradimensional powers from her Young Avengers days, which is going to make for a difficult balance. Still, this issue holds together well and the tension of America’s family troubles makes for interesting drama.  On the art side, it’s a lovely experience as well, with America, Hawkeye and Alloy all looking really amazing in battle, but the quiet moments (like young America’s new “brother” giving her a stuffed animal) are also engaging and emotionally satisfying.

All in all, America Chavez: Made in USA #1 is successful in creating it’s premise, even with some new information/retcons in play. combining action, emotion and a cliffhanger ending successfully with energetic and well-proportioned art, earning 3.5 out of 5 stars overall.  Based on this issue, I am willing to commit to the rest of the five issue series, and I sort of hope there will be more after this.  Of course, I wanted more West Coast Avengers, too, so I suppose I’ll take what I can get.

AMERICA CHAVEZ: MADE IN USA #1

There's some retconning here, but the action and the drama works well enough to keep it all on track.