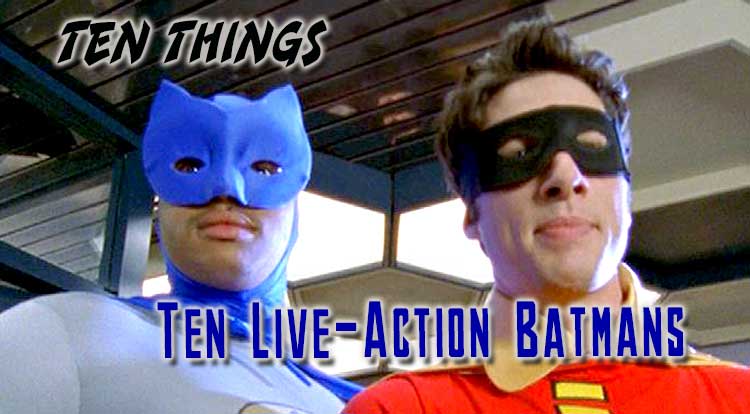 If Major Spoilers has said it once, we’ve said it fifty-three times: Everything’s better with Batman!  Welcome to Ten Things: Ten Live-Action Batmans!

Whooshman-Bicarbonate Films, in conjunction with An Amateur Comics Historian and never, EVER saying “B*tfl*ck”, Presents:

*That is the grammatically correct way to state it, I promise! The first live-action adaptation of Batman came very early-on, debuting in July of 1943, just a little more than four years after the character’s first appearance. Lewis Wilson was likewise early in his career when he put on the cape and cowl, with his first film appearance earlier in ’43. Still, you can clearly see from the jawline how he got the job, defeating a Japanese spy in fifteen serialized episodes. Compared to Captain America, whose 1944 serial changed nearly everything about the character, Wilson’s Batman was relatively close to the original, though he was an official government agent and his cowl “ears” appear to be stuffed.

With that jaw, he kind of looks like Adam West. Fans of symmetry will be happy to know that Mr. Lowery, the second serial movie Batman, grew up on Wayne Avenue. His Batman clearly had a lower budget than back in ’43, and the cowl feels especially cheap and ill-fitting, with the same stuffing issues as that first Bat-outing. Where the previous Batman lacked a Batmobile, Lowery had a 1949 Mercury, and while the plot feels a bit more true to the comics, it’s also pretty dumb. It does however have Commissioner Gordon, Alfred and Vicky Vale.

That Robin mask may haunt my nightmares. The best-known of all the Bat-actors, Adam West is the first live-action Batman to enjoy the advantages of color film, and his 23-year-old Robin isn’t the oldest to date. Steeped in camp and 1960’s pop art influences, West’s Batman was a bona fide phenomenon, reverse-influencing the comics in several major ways: Barbara “Batgirl” Gordon was co-created by the show’s producer to tie the comics and TV worlds together, while the show featured an early shared-universe crossover with sister show ‘The Green Hornet.’ And, of course, the hastily-created Batmobile is to this day the most popular version of said super-car, for good reason.

The whining about Keaton’s casting back in the late 1980s was loud enough that, even as a disconnected teenager in the Midwest, I heard about it. As with so many fan-worries, it turned out to be nothing, as Keaton’s Bruce Wayne was pretty close to perfect, and believable as a man who snaps and becomes a vigilante. (I personally love even the “LET’S GET NUTS!” moment, which makes Bruce seem like a weirdo trying to act like he thinks a tough guy should.) The weaknesses of Keaton’s Batman are actually the weaknesses of Tim Burton films and rubber cowls that don’t allow you to move your neck. Much maligned by fans, ‘Batman Forever’ is, admittedly, a flawed movie, but Val Kilmer once again does a great job in the role of Bruce Wayne. His clashes with the flamboyant Riddler and a non-buffoonery-sanctioning Two-Face really ground the Dark Knight as a character AND he could turn his neck. I’m admittedly a Kilmer fan (ever since ‘Top Secret’ aired incessantly on HBO back in the day) but it’s hard not to wonder what the actor could have done with a different script or a sequel turn. Sadly, unless you count his rebooted Bluntman, it simply is not to be. George Clooney’s turn as the Dark Knight was overshadowed by his codpiece, putting the Bat-franchise into hibernation for several years, but he has his moments. His interactions with Robin were pretty impressive, and while he regrets the role now, I also regret watching it, so… Samesies? If you can get past the barely sublimated sexual energy in the sculpted nipples and bulges, the costumes on ‘Batman and Robin’ were quite attractive. #Toyetic

An intense, post-modern Batman, Christian Bale’s take is probably the most successful, appearing in three movies and only completely overshadowed by the villains in two of them. They’re not to my tastes, but you can certainly see why multiple people have screamed at me that they’re masterpieces, deconstructing Bruce Wayne and his alter-ego with cutting edge design and stunt-work. You can’t even be mad at Bale’s growly vocal effects, as the stories drag you in and pull you along for the ride. Heavily armored, battle-scarred and cagey, Ben Affleck’s Bruce Wayne is actually pretty good, especially in the moments where he gets in little bits of dark humor. (“I’m rich” is a fave-rave for me.) Even though I prefer my Batman not to be heavily armored and driving literal tanks, it’s easy to see the appeal, and it’s as successful a take on Frank Miller’s chunky future Bruce Wayne from ‘The Dark Knight Returns’ as we’re ever likely to get. I hope that fans of the character get what they want from the recut version of ‘Justice League’ that shall go unnamed. Speaking of dystopian future Batmen, venerated Batman actor Kevin Conroy (who was nearly 40 when he took on the role of Batman back in 1992) finally got to step into the pointy boots in live-action. The voice behind one of the defining modern takes on Bats, his bitter, broken-down alternate-Earth Bruce Wayne was even more shocking with that voice. It was my favorite of the performances on today’s list, even above Val Kilmer, and Conroy nailed it. After being Batman for the better part of fifteen years, I love that he got to do it with his own face, even at the age of nearly 65. I admit it: When I started formulating this list, I expected Robert’s first Bat-film to be out by now. Then again, as the lead time for Ten Things stretches out, I also expected that I wouldn’t get this one out before 2022. Regardless, we’re going to have to wait another year or so for the official word on how this works, but I have to say, I kind of love the uses of Joe Chill’s gun as part of the Bat-symbol. I’m also looking forward to Zoë Kravitz’s Catwoman, because Zoë Kravitz. (And before anyone starts to give me any static, please note that the precedent of a Catwoman of color dates back to AT LEAST 1968.)

This week’s topic, Ten Live-Action Batmans, is all me, but feel free to follow along @MightyKingCobra for more Ten Things madness on Twitter.  Or, you can check out the full Twitter archive here!  As with any set of like items, these aren’t meant to be hard and fast or absolutely complete, if only because there will ALWAYS be another Batman movie, and eventually we’re gonna see him played by one of the kids from ‘Danger Force.’ Either way, the comments section is below for just such an emergency, but, as always: Please, no wagering!