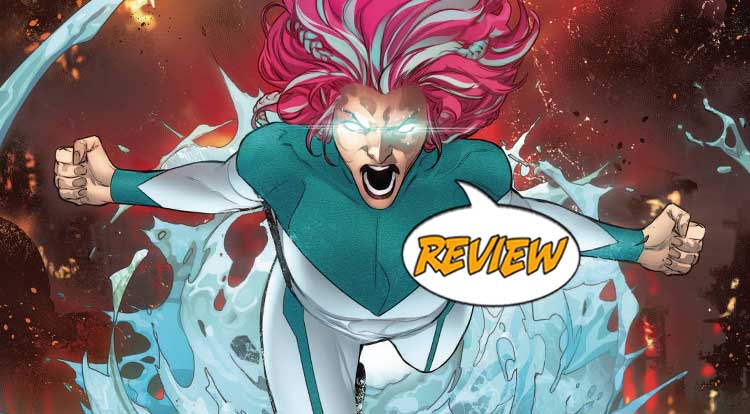 Britannia is dead.  Can her team survive the loss?  Your Major Spoilers review of The Union #3 from Marvel Comics awaits!

Previously in The Union:  Britannia, Snakes, Kelpie and the Choir were Britain’s newest super hero team!  Drawn from all four nations of the United Kingdom and let by Britannia, Britain’s beacon of hope, the Union was was meant to exemplify the country’s best and brightest working together.

That was the plan, at least…

THERE SHALL COME A BULLDOG

We open an unknown amount of time after the dissolution of the team (The Choir mentions spending months living in the middle of nowhere, but it’s not clear if that’s since last issue), she is attacked in her home by a mysterious posh visitor.  Back in Manchester, Union Jack gets a call from the team’s handler reminding him that he agreed to be a part of a super-team, and gets to meet the newest member, an angry little man called The Bulldog.  They fight briefly before setting off to find The Choir, only to discover that Kelpie and Snakes are already there, having gotten a call from her before she disappeared.  Her home is destroyed, and the team discovers a shape-changer called The Shifter hanging around.  He outsmarts them for a moment, but the reveal of Snakes’ secret (he’s not just *called* Snakes) shakes him, allowing the team’s liaison, Mr. Selwyn to reveal a little secret of his own…

THAT GOT DARK, QUICKLY

On the one hand, I really enjoy what this issue has to offer, as I feel like the obligatory ‘King In Black’ crossover stuff has kind of choked out the nuts and bolts of starting a super-team, with this issue for the first time really digging into the troubled members of The Union and how they may (or may not) come together.  The fact that this book was delayed from the previous crossover seems to support this thesis, as does the fact that the solicitation from Marvel bears no resemblance to what is actually in the issue, making me think there was extensive rewriting.  It’s good rewriting though, aided and abetted by clear, classic-style art from di Vito and Underwood.  I really enjoy the designs of these characters, which makes it even more of a shame that the book is debuting as a miniseries rather than an ongoing.  In the Marvel Universe, that generally means that we’ll never see them again once this series is done or, if we do, it’ll be as they die in another crossover to drive the Avengers to victory.

In short, The Union #3 is a better-than-average read with an interesting cast and some well-developed story points, aided by strong art and a clear reality subtext, earning 3 out of 5 stars overall.  Even with my concerns about longevity or follow-up, it’s got a fun cast of characters and it’s telling a story that I enjoy, making me hope we get more Grist in the Marvel Universe, even if it’s not this team.

Its an enjoyable issue that finally starts to examine the members of the team and it works, even if part of me wonders why we couldn't get that sort of thing two issues ago.