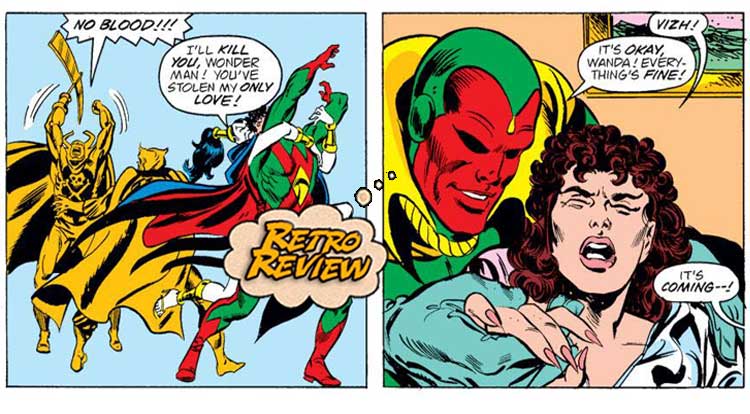 Meanwhile, spoiler-free and apropos of nothing… Your Major Spoilers (Retro) Review of Vision and the Scarlet Witch #12 awaits! VISION AND THE SCARLET WITCH #12

Previously in Vision and the Scarlet Witch: After retiring from Avengers membership, The Vision and Wanda (who has no last name at this point in time, as her ties to the Maximoff family were retconned away when she was revealed to be the daughter of Magneto) moved to the suburbs of New Jersey, where they tried to build a quiet life for themselves.  That quiet was punctuated with occasional villain attacks and superhero guest-shots, but it also allowed the happy couple to conceive.  Now, a very pregnant Wanda is expecting… literally, thanks to her powers. Declaring that they’ll name the child Diana if it’s a girl, Wanda then tells Vision that she’s sure they’re having a boy, thanks to her powers.  Elsewhere, their old enemies Nekra and The Grim Reaper prepare an attack after losing to the witch and the synthezoid earlier in the series, while the upcoming birth brings family to town, in the form of Wonder Man, the Vision’s brother.  (In truth, he’s the human from whom Vision’s brain patterns were copied, but Englehart establishes earlier in the series that the two heroes were enjoying a fun sibling relationship.)  Of course, Simon isn’t the ONLY family member in town… Howell really sells the uncomfortable interactions between the ionic powerhouse and the mutant master of magnetism, as Magneto explains that something drew him here to an underground cave, the very cave in which Nekra was earlier resurrecting her partner.  With Wander officially in labor, and Vision naturally distracted, they team up to track down the source of the issues.  Under the care of Doctor Stephen Strange himself, Wanda goes into active labor, while the in-laws (which would make a pretty good superhero name) face down the villains outside. Fortunately for our hideously costumed heroes, a man with a huge metal blade for a hand is easy prey for Magneto, and when he forces Grim Reaper to cut himself, the villain realizes that he’s undead and has a mental breakdown.  While the fight rages outside, Wanda gives birth to a healthy baby boy, only for Doctor Strange to realize that she’s actually still in labor… with a second child! With baby Tommy (named for The Vision’s roundabout creator, Professor Phineas Thomas Horton) already takin their chosen boy name, Wanda names her second son William, after Simon “Wonder Man” Williams.  It’s a very cute moment, especially the obvious joy in the face of the usually stoic Vision, and leads to a sweet moment among the extended family once Wanda and the children make it home. Magneto is farklempt to have grandchildren, neighbors Glamour and Illusion are ambiguously evil, and the WandaVision family settles in for their first days of midnight feedings, lack of sleep and general joyfulness.  If you are among the few who DON’T know what happens next, it’s a wonderful happy ending, and the team of Howell and Springer bring it all to life wonderfully.  Vision and the Scarlet Witch #12 is a strong final chapter that doesn’t give any hints to the horrors that lie in wait for our sweet little family and eve if it’s overpriced due to certain television shows and it being the first appearance of Wiccan, it’s absolutely worth the read, earning 3.5 out of 5 stars overall.  I read this book in the original issues and it is still some of the best of the end of the Bronze Age of comics, which is why I’m so glad to see it being heavily referenced by ‘WandaVision’ on Disney+.  Just… don’t google what happens next, okay?

VISION AND THE SCARLET WITCH #12

Richard Howell's art is an acquired taste and Englehart is working several layers deep in Avengers continuity, but it all comes together to deliver a sweet issue full of family bonding and zombies.